Photo of Todd Bentley, who is not close to being as abnormal and completely abnormal that obviously Jan Aage Torp is, Torp is much, much worse! 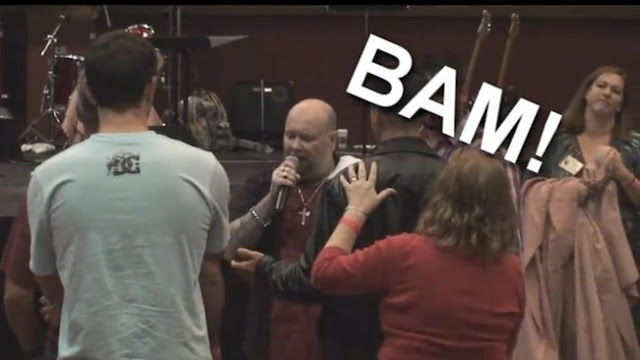 The inquiry, which is all Torp "friends"? Are they like Job's friends? Who stood with Torp when they could criticize, and thrash about with big words? But when they themselves should be weighed in the balance as they were found wanting. Here every answer for themselves, I know that remarriage is sin, and there is a double sin that pastors and shepherds do it. For they are a role model and a model for others in the congregation!

Full victory for me and Meling, Torp anchor not but be tiny in the acidic apple.
But he is celebrating this as a victory, it just says that the man is not level.

August 04, 2016
On January 25th, the Oslo City Court Convicted the blogger Jan Kåre Christensen. The pastor couple Aina & Jan-Aage Torp are grateful for the Unanimous verdict, and are now finished with the case.
- We Reported him to the police Wed, September 24th, 2014 and the Police indictment was supported by the Oslo City Court. Our Objective with the police report was to stop his harrassment and persecution of many ministers for a number of years, and Specifically of us since 2011. The verdict is so decisive and clear That we havebeen comfortable two presented it for search engines and other implicated entities That are following Constantly up on this, based on Norwegian and international law. We Have Achieved all that we had intended by reporting him to the Police, and this sets the standard for our many colleagues That huh harrass on a daily basis.

Christensen was sentenced based on § 390A of the Criminal Law: "Whoever by intimidating or harassing behavior or other reckless behavior Violate another's peace or who is accessory thereto is punishable by fines or imprisonments up 2:02 years. Public prosecution Shall only take place at the request of the aggrieved party and is deemed Necessary in the public interest. " The verdict from the Oslo City Court states That:


"In the period from January 2012 Thu March 2015 from his residence in Hook path 2C in Oslo or elsewhere, he proposed on the website jan.christensen.net and / or other websitethat he had established a number of blog posts where Jan-Aage Torp was featured Partly as a "self-centered", "nasty," "rude," "narcissistic," "sick," "tyrant", "psychopath" and "leper". Further More, it was repeated in several of the posts and / or in the comments That Torp "lives in fornication" and That he is an "old pig WHO divorces and marries the nanny."

2. Jan Kåre Christensen will not would have to pay compensation.

3. Jan Kåre Christensen is further more sentenced to the payment of the court expenditure for the public: 3000 - threethousand - crowns.

Borgarting Court of Appeal has unanimously denied the Convicted blogger's appeal Regarding the presentation of evidence and the question of guilt after the verdict from the Oslo City Court, but will allow That he "march presented an appeal pertaining two application of law". The verdict from the judges says: "The Court of Appeal does not find thatthere are special reasons two presented an appeal Regarding the presentation of evidence under the question of guilt. The action of the appeal case will be based on the factthat Oslo City Court found to be proven ". The appeal case will be Conducted Wed., April 5th, 2017. The Public Prosecution office in Oslo finds it Unthinkable That Pastor Jan-Aage Torp would be summoned as a witness in thatthis is "legal fodder" that deals only with the question about wooden legalize Paragraphs should be considered. Nevertheless, the verdict against Jan Kåre Christensen is unambiguous and Unanimous, and the appeal case Consignor gives no grounds for a re-evaluation of the evidence and the question of guilt. The application of law is a matter between the Public Prosecution office in Oslo and Christensen's attorney, Brynjar Meling, and has no practical significance The for Torp.

- We are so content with this verdict That we regardness thiscase as finished, Maintain the pastor-couple Torp Who are especially grateful for the help They Received form Attorney Ann Helen Aarø in the proceedings of the City Court, and from attorney Per Danielsen in the assessments of the appeal case, whichwill be limited to the application of law. We are Also thankful for good work by the Hate Crime Group that Manglerud Police Station.

Jan Aage Torp has really dritte drawbar and lost! But get this to be a victory, not I realize that one can take such a degree wrong!