No. 1274: Police in Norway need not be better than Polti in North Korea or Saudi Arabia, if they make the same mistakes!

No. 1274:
Police in Norway need not be better than Polti in North Korea or Saudi Arabia, if they make the same mistakes!

Picture of North Korea's leader Kim Jong-un who unfortunately is a very poor conductor, but if others take after him. When one is on the same level, therefore reminds Polti here in Oslo to be in very poor level when they operate with two sets of laws. If I write something, it's criminal.
But come second and prints the same, or much stronger verbally. Then it is not a crime, go figure can! This is something in the roar of the North Korea! 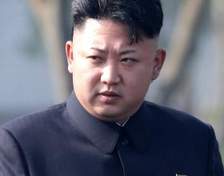 Has received a lot of feedback where some believe I've gotten a judgment that is "fair" and that as "deserved."
While others think like me, that whatever Polti and Oslo District Court has done is on a par with North Korea or Saudi Arabia, or slightly worse !?

Examples of what Norway has done, which is on par with any country that we will not be compared with. The list is large, let me mention three examples.

1) We are killing in the womb each year a small Norwegian town. This is so savage it can remained!
2.) Child Welfare Services in Norway has for many years been able to ignore those who really need help. This has, inter alia, seen with Ann Christin and Jan Aage Torp their children for long, long ago should have and should have been reached in a foster home to received a safe and good upbringing. While those who do not need to be deprived of their children, holding CPS doing. This is really bad!
3.) Norway was eg. with bombed Libya is a nation that had an equally well-functioning health care system as a Western country. Okay, a despot who led the country. But to bomb such a country is really a crime against humanity, this was Norway on!

Police on Manglerud is something like North Korea or Saudi Arabia as they are doing with me and the family Christensen.

Compare with everything I have written, up against what they've written about me in the false Smyrna blog, then it becomes like a firecracker up against a nuclear bomb. We now face a miscarriage of justice.

Why we are not reviewing Berit and Jan Kåre Christensen separation
On July 2, 2016July 2, 2016 Smyrna Church in Oslo
From many sources we have learned that the couple Berit and Jan Kåre Christensen is separated. It is not impossible that this process will end with a divorce. We know very little about when the course is no Smyrna Church and our acquaintances who has ever gone through this process before. It says itself.
We will obviously not give this Christensen separation and eventual divorce any more attention here.
We have listed us that his sentenced blog removed from the Internet during the next few weeks.

Jan Kåre Christensen: I'm unfit as a pastor and Christian leader.
March 12, 2016 Smyrna Church in Oslo
We Smyrna Church find it clarifying the father of five and the convicted internet Terrorist Jan Kåre Christensen in his blog has acknowledged that he is fit as Bible teacher, pastor and a Christian leader.
In his blog post http://blog.janchristensen.net/2016/03/nr-1399-star-apostel-og-pastor-jan-aage.html he has written:
"But as head of the family is the father, not anyone else who is responsible for everything that the family carry on with. And they do something that is not good, then it's Fathers task to correct, exhort, rebuke and encourage.
Succeeding a non? Whose fault? "
There are facts that none of Jan Kåre Christensen their own children are Christians. All his children except his youngest son, living both in fornication and sin. And this they do openly and nuisance to Christian people. All his children except his youngest son, has taken clear and distance from their father and his beliefs.
We think it's nice that Jan Kåre Christensen now admits he all these years has lied to and about his blog. Including his so-called "Smyrna Church" as he used to defraud gullible people for money. A church that has never been real when Jan Kåre itself, through the Bible, disqualified from being a pastor.

Jan Kåre Christensen: Lonely, abandoned and chasing the girls
On July 5, 2016July 5, 2016 Smyrna Church in Oslo
Old man / oink oink with Casanova and preacher aspirations
Jan Kåre Christensen is these days lonely and abandoned after his life has been laid open to social media.
We and other sites and Facebook is aware that marriage between Jan Kåre and Berit Christensen is in a pause after the family Christensen was aware that Jan Kåre has been the father of Jesus Maria after an affair with a young Spanish girl. Jesus Maria is now a few years old and living in poverty after Jan Kåre did not fulfill their promises.
This is in addition to another paternity Jan Kåre has outside this marriage.
We, other websites and undoubtedly Berit itself is aware that Jan Kåre has acted anything but høvelig above maidens he has come in contact with through his job. His name is pending in social media as a man should not be alone in a closed room or in an empty bus.
In addition to this, Jan Kåre his childish and senseless behavior in the last two years online where he has driven their three children Sara Caroline Christensen, Jan Benjamin Christensen and Benedikte Rebekah Christensen bottomless despair. None of these has given his father any kind of support in his bitter war of words against everything and everyone. Private they have taken strong distance from his father. His oldest daughter has repudiated him in among others Searchlight.
This has given the marriage Christensen a problem and a break. Berit and Jan Kåre is now just together to keep the facade and the illegal collection of money for their privacy alive. Privately, they separated and live their separate lives where Jan Kåre is deeply despised by the rest of his family.
We are anything but surprised by this when Christensen family outside Jan Kåre is a reputable family. They do not deserve Jan Kåre and never asked for the shame he has caused them. We seem genuinely sorry for them.
Anything more than this can not be said.

Here there are so many lies, but to limit myself, I take with just five, that's enough.

1) I will be accused of being fembarnsfar. I have only three children. This is malicious!
2.) I was being accused of lying in separation. This is a lie and putting out false rumors. This is malicious!
3.) writes: 'We have noted us that his sentenced blog removed from the Internet during the next few weeks. "This is also malicious lie!
4.) This writes the "All his children except his youngest son, living both in fornication and sin." This is also the malicious lie, and putting out false rumors!
5.) This, they write: "We are anything but surprised by this when Christensen family outside Jan Kåre is a reputable family."
This is also a lie, I and my family are together and we are all in the family Christensen honorable and good people!

There is an ocean of hate speech against me. 20 - 30-000 I expect?
This that I and my family are fair game just shows what the police as it is at Manglerud in Oslo, ala North Korea or Saudi Arabia !?
Even Norway's 2 biggest and worst web roll, Ansgar Braut and Torodd Fuglesteg allowed to write exactly what they want, spurred by Jan Aage Torp. Without being punished or tried stopped! It's me incomprehensible that what I do to be criminal. But then others and makes it a hundred times "worse" than me, which also goes out over three innocent children who have never sought the public light.
They are time after time hanging out with your full name, it is not a criminal offense?
I am 120% sure that Polti at Manglerud is worse than Polti in North Korea and Saudi Arabia. Although they had not been so unfair and unjust!