No. 1066: Most Accept not Jesus and wanted to kill him when he proclaimed Year of jubile!

No. 1066:
Most Accept not Jesus and wanted to kill him when he proclaimed Year of jubile!


Image of Jesus, who is our life and our everything says the apostle Paul. 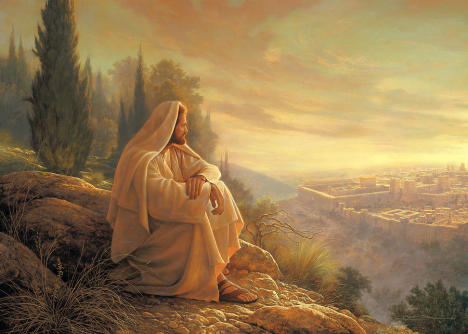 
Luke 4 16 And he came to Nazareth, where he had been brought up, and went according to his custom on the sabbath day into the synagogue and stood up to read. 17 And they gave him the prophet Isaiah 'book, and when he opened the book, he found the place where it was written: 18 The Spirit is upon me, because he hath anointed me to preach the gospel to the poor; He has sent me to proclaim the prisoners that they will have freedom, and to blind sight, to set at liberty, 19 To preach the acceptable year of the Lord. 20 And he closed the book, gave it back to the attendant and sat down, and all who were in the synagogue were gazing on him. 21 And he began to say to them, This day is this scripture fulfilled in your ears. 22 All praised him and marveled at the gracious words that came from his mouth. "Is not this Joseph's son?" They asked. 23 And he said unto them, Ye will surely say unto me this proverb: Læge, heal thyself! Whatsoever we have heard done in Capernaum, do also here in thy country 24 And he said, Verily I say unto you, No prophet is accepted in his hometown. 25 And in truth I tell you, there were many widows in Israel in the days of Elijah, when the heaven was shut up three years and six months, when great famine all over the country, 26 and unto none of them was Elias sent but only to a widow in Zarephath in Sidon. 27 And there were many lepers in Israel in the prophet Elisha's time, and none of them was cleansed, but only Naaman the Syrian. 28 And all in the synagogue were filled with wrath when they heard this, 29 and they got up and drove him out of town, and brought him out on the brow of the hill that their city was built, to cast him down. 30 But he passing through the midst of them went his.


Israel should have been fifty years have jubilee of the Lord, where everyone got remitted its stand and was free again. This was the law of Moses, but unfortunately. Never been held in Israel, even though the Law of Moses said this abundantly and clearly.


Jesus himself proclaims Jubilee year, it begins with his entry into the world: "To preach the acceptable year of the Lord." No wonder they reacted this way: "Everyone praised him and marveled at the gracious words that came from his mouth. »


The basic text says that he proclaimed not acceptable year of the Lord, but Jubilee. Further, it is not marveled at the gracious words that came from his mouth. But in the original text reads: "those who waited on hearing these words, the Jubilee Year was begun, they spoke well of him." This hated those with positions and who had acquired land and wealth at the expense of others. Therefore, they would stone and kill him. We must understand that Jesus' message was so controversial when he spoke my power cons. John the Baptist experienced something similar with Herod, when he spoke against remarriage!


Jesus is basically even this Jubilee Year, when he says the following in John. 8. 34 Jesus answered them, Verily, verily, I say unto you, Whosoever committeth sin is the servant of sin. 35 And the servant abideth not in the house forever; the son remains forever. 36 If the Son sets you free, you shall be free indeed.


This to hear the truth, that we must repent and improve our works, the pain so much that instead of going in itself, so lets one their fury go out and against God and the Lord's witnesses sent by God to preach truth.


(first paragraph of Heb. 'trumpets, horn'), the name of a høytidsår which according 3 Gen. 25.8 ff. to be celebrated every 50 years, ie after every 7 sabbatical. Slaves were to be released, acquired land would be given back to the original owner without compensation. The provisions characteristic of a society in which life and the earth belongs to God and the seed, not the individual. The transfer of such assets should in Israel only happen through "forpaktningsavgift» calculated by the number of years until the next jubilee, but it is clear that the provisions have never been observed. First during the 1000 year kingdom with our King, Ruler and Lord Jesus Christ will this be full compliance. Also the other festivals, especially the Sabbath and the Feast of Tabernacles will then fully celebrated!


Most profoundly, so is Jesus lion cottage stone, he is the Sabbath, he's Jubilee, he is absolutely everything.


1 Cor. 1. 30 But of him are ye in Christ Jesus, who is made unto us wisdom from God and righteousness and sanctification and redemption: 31 That, according as it is written, He that glorieth, let him glory in the Lord!


Note the following: "Christ Jesus, who is made unto us wisdom from God and righteousness and sanctification and redemption." Jesus is all that we get what we need and what we have that affect. Therefore, votes there, that gets Son sets us, so we get real free. Freedom and everything, it has only and alone through Jesus. Whoever does not have him, he has neither salvation or life!


Whoever has him, it has absolutely everything, even if the account is empty or minus!

Has received some inquiries regarding Jornstrand, I have nothing against him, but he has something very welcomed me. Of course this is just sad and not in honor of someone. But in this case I am the way I see it, completely innocent and there is not anything I can get rid of that.

This was and is the main reason for that Jornstrand added me to hatred, but it's not my problem, but his.

Here is some of what I've written about him for ca. 1 year ago but had to take it away for a time because regard to other parties to this case that seems right and struggled that Strand was too fierce!


Jørn Stand collaborates with Jan Hanvold living in open sin then becomes an accomplice in his sin says the word of God!

There is much that is good with Jornstrand but the very worst and most serious for him and everyone else. It is his collaboration with Vision Norway and Jan Hanvold. That makes them an accomplice in Hanvold evil lives and works, and we can not take lightly.


Are you an accomplice?


2. Joh. b. 9 He who does not adhere to the teachings of Christ, but goes beyond it, does not have communion with God. Whoever sticks to teaching, he has fellowship with the Father and the Son. 10 If anyone comes to you and does not bring this teaching, so do not receive him into your homes, and greet him not to attend. 11 For he who greets him, being an accomplice in his evil deeds.

Jacob 3. 1. My brothers! Not many of you should become teachers, knowing that we will be as much stricter convicted.

Lukas 17. 1. He said to his disciples: "It is inevitable that offenses come, but woe to him through whom they come! 2 It would be better for him to be thrown into the sea with a millstone around his neck, than that he should offend one of these little ones. 3a Beware!


It amazes me how little enlightened believers is about these things. That we stand in a relationship to all other believers if we want it or not. We are like a body and belong to each other. And when a limb live not in line with the head - which is Christ - it rubs off on everyone else. When a limb is obedient, then the consequence is that it also affects the other. This has nothing to do with anything other than that we are in direct life connection with each other because we have the same life and the same Spirit. And the same Saviour, Lord and Father. All this binds us together as believers in spite of divisions and disagreements. This is a fact and a reality.

Those who are ministers and are accountable to others, this even stronger. I have preached has an extra large responsibility, this also applies to everyone else.

When publishers set up in conjunction with other ministers who live in sin or driver with heresy, then we become accomplices. Yes, it is so severe in some cases that Jesus said that it had been better received a millstone around his neck and been thrown with it around your neck and then had a just destroyed itself. But here ruining a not only for themselves but also for others. We lead others to damnation, out of disability and into the delusion of self-influence and preach to others. It says in Rom. 10. 17 that faith cometh by hearing. It applies not only to religion but also heresy and unbelief also comes by hearing, have you thought about that? Or are you one of those who accept everything and do not have their own opinions and attitudes? Everything is not of God if it is not in accordance with God's word. It is only that which agrees with God's word, that we must align ourselves. Everything else should we shun that "plague", it will lead us down from Christ and the simple fidelity to him!

Here is an explanation of why the priest collar around the neck as figuratively have much going for it: Enno today is priest often painted with the ancient priestly collar. But what was the idea behind this under physician creation?
Ei of explanations is that the collar should remind priest millstone. Not the bottom of the mill in the village, but the stone that Jesus tala about: "The top attraction to fall ein of these little ones who believes in me, he was better lit getting ein millstone hanged about his neck and søkkt in the depths of deep".
It would therefore vera better to get ein millstone round the neck than to cause ein who believe in Jesus, on wild tracks. So serious is it to cause human dockable veg than what God says.