No. 1062: God showed us His love through and through Jesus died for us while we lived away from him!

No. 1062:
God showed us His love through and through Jesus died for us while we lived away from him!


Image the burial of Jesus 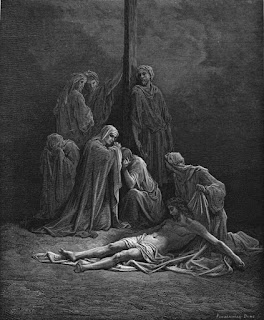 
God's love against us people extends far beyond without human love. It is underbart with human love, it is far better to prefer than hatred, intolerance and antipathy.


The Apostle Paul experienced when he stranded on Malta that residents there showed him human love, which was of great help and blessing.


Acts 28. 1. When we now had escaped, we learned that the island was called Malta. 2 The Uncommonly benevolence towards us; they kindled a fire, and received us all, because it had started to rain and was cold.


God shows his love even welcomed when we have hated him, mocked him, and in all ways done for him!


God loves us in a way where we are all gathered. And when God describes us humans, so he describes us as a large group having deposited him and realized ourselves. God is not downtown, but we're center. Yet his love for us all equally strong, spacious and altinkluderende.


We read in God's word about us humans:


10 As it is written, There is none righteous, no, not one; 11 There is none who understands; there is none that seeketh after God 12 They are all gone aside; all the hope they have become worthless; there is none that doeth good, no, not one. 13 Their throat is an open sepulcher; with their tongues they did guile, gall of asps is under their lips. 14 Whose mouth is full of cursing and bitterness. 15 Their feet are swift to shed blood; 16 Destruction and misery are in their ways, 17 and way of peace have they not known. 18 There is no fear of God before their eyes.


God's description of us people we find here in Romans 3:


Here there is no possibility for improvement, it is and remains hopelessly!


Even God's own angels God wrong with, how much more with us humans?


But anyway, we people oppose against God, and that many times the strongest way to would put us above God. Yes, in God's place. But his love extends such backward in time, that human love does not reach up to God's love even to the ankles.

Our starting point was hopeless, there was nothing to love us, anyway he loved us. It showed he fully by sending his own son to die in our place, delightful.

Mycommentaries Mark's Gospel 12 1 Then he began to speak to them in parables: "A man planted a vineyard and put a wall around it, dug a winepress and built a watchtower. Then he rented the vineyard to some winegrowers and traveled out of the country.

Jesus spoke in parables. It had been an open confrontation between Jesus and then around ten top managers. It was here more subdued when they realized the could not do what they wanted with Jesus when he was a renowned Rabbi throughout Israel and all others, even the occupier of the land showed who he was.

2 When the time came, he sent a servant to the tenants to get his share of the crop.

But Jesus grasps the word and speak in parables. He showed what awaited him but is both bold and brave as abilities and are willing to speak so sharply as he does here.

3 But they seized him, beat him and sent him away empty.

We read through the entire GT history which treatment prophets did. It was many times very costly when the tom gave their lives time after time.

Hebr.11. 35b Some were tortured, refusing to accept release, that they might be partakers of the better resurrection. 36 Others had to endure mocking and lashes, yes, moreover, links and imprisonment. 37 Some were stoned and tortured, sawed into pieces or killed with swords. Others had to go about in sheepskins and goatskins, destitute, in pain and received rough treatment. 38 They were too good for this world. They wandered about in deserts and in mountains, and in dens and caves.

4 Then he sent another servant to them; him they beat in the head and mocked him.


Yes indeed, the treatment they received was in the whole evil.

Matt. 23. 30 If we had lived in the days of our fathers, we would not have been involved in killing the prophets. 31 Therefore is yourselves testify that you are the descendants of those who murdered the prophets. 32 Continue when the fathers began, until the target is full. 33 Snakes and vipers! How can you escape being condemned to hell?


34 Therefore I send unto you prophets and wise men and scribes. Some of them you will kill and crucify, shall ye scourge in your synagogues and persecute from town to town. 35 And so shall punishment come upon you for all the innocent blood shed on earth, from the murder of righteous Abel even to the murder of Zechariah son of Barachiah, whom you murdered between the temple and the altar.


5 Then he sent another of place; him they killed. And so with many others: some skamslo they, and some they killed.


It was by and large a particularly nasty treatment most Prophets and others that God anointed got through the whole history of Israel. Some exceptions are there but the rule is rather that they were in no way to work freely and complete his vocation and service.

6 He had one left, his own beloved son. Finally he sent his son to them; Lest My son will have respect for.

Consider God also sent his own son. God gave up his own Son also testify God's generosity and love.


Joh. e. 3. 16 For God loved the world that He gave His only begotten Son, that whosoever believeth in him should not perish but have eternal life.


7 But the cultivators said among themselves, This is the heir. Come, let us kill him, and the inheritance spring.


ow they treated Jesus? Was it deliberate or was it a miss? Without doubt they treated Jesus very badly and with intent.
Joh. e. 8. 18 I bear witness of myself, and the Father who sent me bears witness about me. "19" Where is your father? "they asked. Jesus answered, "You know neither me nor my Father. If you had known me, you would know my Father also. "20 These words spake Jesus when he taught at the treasury. But no one arrested him, because his hour had not yet come.

8 So they took him and killed him and threw him out of the vineyard.

What treatment and death got Jesus? He witnesses in advance about how his earthly life will end. He will be killed, even his own will he go in the lurch deliberately.

9 What then will the owner of the vineyard do? He will come and destroy those tenants and give the vineyard to others.

Jesus concludes when both prophets of God and his Son of God, all in the whole received the same treatment. Humiliation, exclusion, contempt and finally being killed. What deserves those people then? Jesus says it in plain language, Gentiles as Jews ansåg being dogs will have the opportunity to take care of the vineyard.


10 Have you not read this scripture:


The stone the builders rejected,


has become the cornerstone.

It is also somewhat refreshed with Jesus' teaching. He always brings HOPE, FAITH and LOVE on the pitch! Although he has been rejected is and he remains the cornerstone of God's building.


it is marvelous in our eyes. "
That this is the work of God, we must only truly realize. Even today after Jews rejected Prophet Jesus and the Gospel, God has not rejected them. The whole time, God has a plan where he enables us to receive His blessings and good gifts. Only time is ripe for it and we will be enabled to accept that he will bestow us!


12 Then they would to arrest him because they knew that they were the ones he was referring to in this parable. But they were afraid of the people, so they left him and went away.


It was not just here but throughout Jesus' ministry on earth, they wanted to have him removed. Jesus was like a thorn in the side of those, who himself was just pure and good.
(end of quote).


Final Comment:
Bible important and delightful theme is Jesus reconciliation, where God was reconciling the world to himself. But to say that one believes in this, but live according to their own carnal desires, then deny than Christ. Therefore also says scripture that we who believe in God and His son's name is ought to walk as he walked in this world! But if we sin, we are always righteous, all due The blood of Jesus!