No. 1058: Raymond Johansen is like a Sunday school boy towards Jan Aage Torp's own language, as far worse than using profanity!

No. 1058:
Raymond Johansen is like a Sunday school boy towards Jan Aage Torp's own language, as far worse than using profanity!


Photo of the upcoming Governing Mayor here in Oslo Raymond Johansen, who is as a kind and inoffensive Sunday school boy up against the bad and the ugly in Jan Aage Torp which is captured by hatred and other non pleasing neither to God or man. 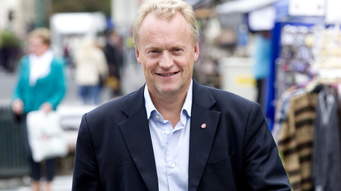 By all means, cursing is not allright. But when Jan Aage Torp exhorteth some, whatever it may be, so it all becomes pathetic and ridiculous.


This he calls me, that's just kind and good mostly, and not one thing that he claims here is true. It shows care that Jan Aage Torp is a dummy last and a very evil, a deceptive man who obviously did not manage to see that he can not exhort anyone with such a miserable life behind him.


Jesus says to you see that light in you is not dark in Torp's inner being is the pitch dark to be afraid of!


No believer is he rather when he is an adulterer and fornicator by the word of God to be re-married as "pastor" and "believers"!


Look here: this is what January Aage Torp call me, is not this harassment and hate speech on the web I do not know:


"Should they wanted a" desire opponent ", then Jan Kåre Christensen" perfected ".


Moreover writes Torp that I'm dirt, stalker, totally unintelligent, a Nolde "hat blogger", idiot, demon, desire lies, vile blogs, outcasts who lack the mind of Christ, ordinary judgment and social intelligence. The rumors JKC and the truth is his understanding of English and Norwegian rather limited too!


One should probably be able to call it a variant of social-pornography "+ Much, much more!


Here something more from how he presses his own family and son, as ordinary people could never done. But Torp, as the great apostle he is, and psychopath, then it is "normal".


"Met with respect. - What are your comments on the specific objections he comes, Jan-Aage Torp?


Growing up, there were many who experienced Anders as a sensitive and was the boy. At times, he had a strong Jesus engagement. It is always difficult to supervise a youth in the various phases, but I think I met Anders with respect for his own choices and desires. I have not always succeeded, but I've done the best I could. "


Torp operates as a magician. He tries to influence people's perceptions. A magician trying to get it to look like something is happening that is not happening. It can be done by focusing your attention in the wrong direction, away from the case. It makes Torp here. By specifying son's personal qualities and only that, people may be left with a feeling that the problem is his son's abilities. It is easy to attach themselves at her son's abilities. It's actually the only thing that is concrete. Everything else in the answer are in fact generally, and one can not stick to it, but it is wrong that the problem is his son's abilities. The problem is Torp its handling, but Torp blurs, confuses and takes attention away from the issue. It is intended so it should not arrive at Torp has handled this badly. It is meant to look as if his son's abilities is the problem, while Torp is a good man.


How he describes the homosekuelle.


"This is a prayer list that should be lifted periodically to God. Some of these will be transformed by God's grace. Others will according to Romans 1 go longer and longer in its perversity. But let us not misunderstand prayer mission: They must be removed from their positions of power, or they must lose the homosexual focus. For God's sake. For Norway until time's sake. «


Here believes Torp that homosexuals should be removed from society, primarily from their positions. Where in God's word says? The words of scripture is that such persons Torp and homosexuals will not inherit the kingdom of God, but we should not remove people from the community, but love and respect them, regardless of how they live.


Here we are facing a person in which life and teachings diverge to such a degree, that this is hollow! Well that he has "support" from Manglerud police who looks more police in North Korea or Saudi Arabia than a free and well-western country!