No. 1063: Charles Darwin's theory of evolution is dead!


Photo of a chimpanzee that can do much of the same as us humans but for a chimpanzee to be a human being is an impossibility even if Darwin had his strange theories about this and so many other things. 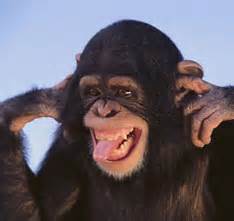 This article includes a conclusion as to why Charles Darwin's theory of evolution is dead.


It is not found after what I know some clear evidence that the body is made up of fractals.  I programmed fractals in 1990 years away.  A simple formula can create complicated structures which can also be altered by adjusting the parameters.  What I am saying is to take example.  central nervous system, it operates with nanotechnology its precision.  You'll create a flow chart of it so it becomes diagram much larger than the nervous system.


Another option with the theory that it only needed 10.1 mb to describe the body is that it is the "matrix" a machine that simulates a human need, but when you move into that you are living in a simulation and you are not real!  Only a drawing to be made and that the drawing is on the 10 mb.  No bigger than a large jpg image.


Take your brain!  It has an estimated storage space of 10 exabytes of data.  Thats a flow chart that describes all the atoms and cells of the brain with all links to the central nervous system and vision with internal wiring poses a colossal diagram.  You can imagine that if the brain is 10 exabytes, so you need at least a chart on 10 Multiplier of it to explain it to the universe as it is a working system .. Possibly in yottaklassen.  What you must take into consideration is that you should have a working system to do things, see things, reflect and plan things.  This requires a well-functioning boards!  Fractals are not a circuit board.  Only data flow to the brain is around 512 megapixels per second which delivers about 20 gigabits of data to the brain in seconds!

That is if it controlled the universe as a chart on the atomic level, it may well be that the diagram is the quark or less level, noes about will make the sum above significantly larger.
It is only the number of atoms, you have not with records clean for placement in the matrix that make up the body.  Ie You must have an addressing system on the Planck scale 1.616252 × 10 -35 m for XYZ coordinates are in space.


So you need an addressing system for which atom in the periodic table and temperature of the atom, and the pairing it had all the other atoms in the matrix.  You must also have the atom is fixed, purse or gas form.
It goes far beyond yoyttabyte class.
I mean the universe keeps track of all the atoms in the universe.  That it is a system that knows everything about all states to everything you can imagine.


I have no faith that you can describe the body with either 10 MB or 1.5 gigabytes of data that DNA from mother and father that everything started with.  It is not enough.  It is a complicated system, with too many and great values. It is so, another program that is larger than the actual DNA


Stem cells are responsible for producing the roughly 17 million new cells humans produce every second through life.  Some cells renew themselves within days others during months: http://book.bionumbers.org/how-quickly-do-different-cells-in-the-body-replace-themselves/
This whole process as cell division is a major task body makes.  This can be written as a program.  Ie it is code you do not see but which must be there.


This is code far beyond 1.5 GB of data!  We speak about that cells divide in example 2 bits and copies DNA thread in the same process.  It gets violently much data far beyond Yottabyte class in a long life.


It is not enough code, unless there is only config file for a program called human.  So we do not see the program, it is beyond what we can measure with instruments that we have today.
What I think is that if you had binary hex reverse engineering compilator and veh human dna strand into it and asked it to create a human being so it would say system error, insufficent data.


We gore in an information-knowledge-related reality computer crashes.  It all begins with 1.5 gb and memory circuits which store 10 Exabyte of data.  It is just not up!  This is live functional organic system, which is not based on fractals, although it is possible to optimize things algorithmically.  But then the question is what the universe running algorithm or the cell division that performs it.


It's either so that DNA is a false flag a distraction inside the simulator, or there is only one configuration file for application man, and the program's code, we do not.
Ie there is a system in the universe!  Some would call it a God since the reigns over what we do and think and say.


It is only logical and rational thinking behind my conclusion.  Man is a program that runs in the universe since it lacks "tag" or it is hidden from us.


Such a system leaves no room for Darwin's theory of development.  Not when the model is that the human is a program.  There is then no evolution if it is man or God created development underpinning.  It is an upgrade of human but not evolution.  It's not that we have evolved from monkeys, etc., it does not support the model.


This post gives rise to thoughts and anguish of existential thoughts.


A side note: Did you know that the body is 21 grams lighter when it dies?  Some say it's the weight of the soul that leaves it.