Fax smile from piece and side that made me blacklisted by Avisen Dagen in Bergen, bad!
Selbekk is hopeless, praises a prostitute and condemns Pedersen as vulgar.
Gets tired of the day.
I shut out to point out Hanvold's whore!
Only facts are pointed out! Have zero comma zero with person attacks! 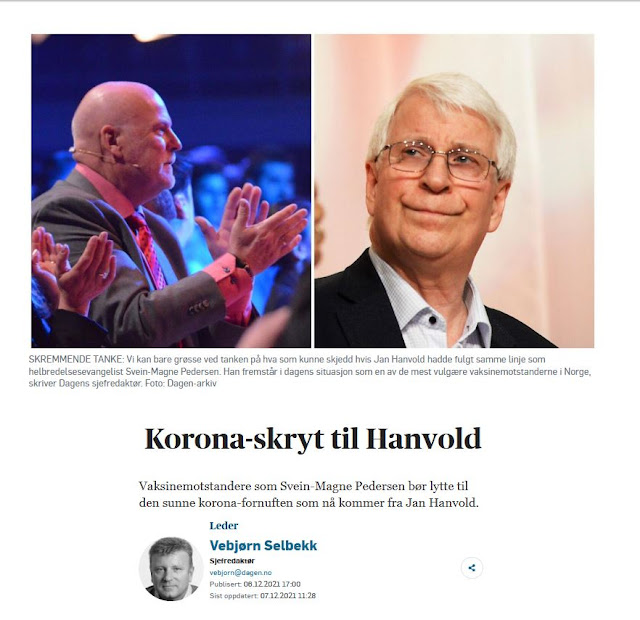 Was shut out of the Christian newspaper Dagens debatt side, after they came up with false accusations. That I attacked Jan Hanvold.

I have never attacked Jan Hanvold as a person, but since he has a morality and ethics that is not compatible with the Christian faith and teachings.
As well as, that this helps to shape all his choices.
Then I can not see it as a person attack as Jan Hanvold is both a leader, Shepherd and role model for many.

I do not have my comment, when the newspaper Dagen deleted it.
Therefore, I try to reproduce it here to the best of my ability.
Background for the comment, Avisen Dagens article was here:

I wrote this, freely reproduced.

Another low goal from Avisen Dagen.
Bring to income a man like Jan Hanvold who is divorced and remarried the herb times.
He does not live right, he does not learn right.
Then to use such a man as a credible man, is and is only wrong and not right!
https://blog.janchristensen.net/2021/11/nr-2955-covid-19-er-uten-tvil-en.html
(end of quote.)

Can not see that this is a personal attack, only facts.

Imagine for a second you were transposed into the karmic driven world of Jeffrey Epstein.
It affects everything they do and the relationships there. No matter what area it is.
This is also the case with Jan Hanvold, who has failed his many wives, God and everyone else with such a life and life.
He is a believer, but lives the exact opposite of God's word.

Here is the email sent to Avisen Dagen:

I hereby wish to terminate Dagen, with the fact that I will stop paying from 1 January.

After an ugly and unnecessary incident where I was banned from commenting on Facebook after a lie from the editors.

Where it is claimed outright lie that I came with a personal attack on Jan Hanvold.

Hanvold himself attacks everything and everyone with whom he disagrees at all times.

I just pointed out that Jan Hanvold does not live by God's word.
Do not learn from the word of God.

Øystein Lid and me:

Looks like I'm locked out of the Day from commenting on Facebook without being notified? Is that right?
Øystein

That is right.
You have sent
All right. Then one should send a justification. All right if you mean it
Øystein

Delete it. But it contained accusations against him in light of his many divorces.
You have sent
This is then legitimate? And, then I should get a warning and explanation
Øystein

It is not Hanvold's message you are attacking, but his personal morality because he has divorced before. = personal attack. The exclusion is not permanent if you promise to refrain from such argumentation in the future.
You have sent
Ok Should call the subscription department and cancel the day. I do not agree with such a low goal. Have a nice day ahead
Øystein

Thanks, the same.
You have sent
Suffer injustice, I get to get even better at it, I understand


From the Day:
Hello.

We have now registered this termination.

Have a nice day ahead, and welcome back as a subscriber on a later occasion.

Thank you, it will no longer be the day for us when the newspaper runs a boycott and exclusion on unreasonable grounds!

Had there been a person attack, then an explanation would have been right.

So a warning, then an exclusion!
Here, Dagen does just like Christian haters, a short process against those who do not bow!

The comment has been deleted too, that's how low people do it!

As unspiritual and beautiful as it is possible to be.

Selbekk is hopeless, praises a prostitute and condemns Pedersen as vulgar.
Gets tired of the day.
I shut out to point out Hanvold's whore!
Only facts are pointed out!

What Avisen Dagen is doing is a boycott line unworthy of a so-called Christian newspaper!