No. 979: Jan Aage Torp's "new" law lost the house on fire now in ours, was it coincidence or God's warning forefinger?


No. 979:
Jan Aage Torp's "new" law lost the house on fire now in ours, was it coincidence or God's warning forefinger?

We should be very careful to say that this is God, Satan or the coincidence behind things.
My experience is that we humans have very limited sense when it comes to such things, so it is about to do to tread carefully here. But to think that we have no answers here, there is something of what I am thinking in and around such events.

Image of Jezebel which unfortunately Aina Lanton with its relationship to Jan Aage Torp is entered under that judgment Torp. She has no right according to God's word to be "married" to someone who is divorced, then the driver both adultery. 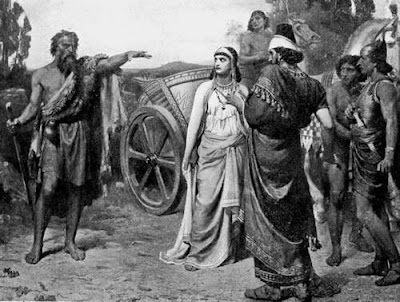 Jan Aage Torp are disobedient to God's obvious words, it puts him under the judgment of God for their lives and that in turn opens up for demonic activity in and around him.

Torp is disobedience against the Lord's words at many points in their lives. I could have mentioned hundreds, but includes only a few.

1) Word of God clearly states that after a divorce for Christians there are only two options. It is either forlige with their spouse or live solitary. Torp has obviously been obstinate and as a rebel to get married again after a breakup.

2.) The reporting a brother is also contrary to God's word. Scripture is crystal clear here. It shall be settled in the church, and if it can not be resolved there. Then the Lord himself shall rectify it or the issues in question. God watches over his own words, to accomplish it!

That Torp Reviewed me that he would remove them Heavenly blog and me from the net direct witnesses against him.

3.) Through this and many other things, then Torp directly unqualified to hold a shepherd or pastor calling. We read in the Pastoral Epistles of Paul about the criteria that a bishop should be. Indeed Torp has not one of them longer in his life if he ever had any of them ?!

4.) Torp has built everything he does in and around the prophecies! This unfortunately most other charismatic branches do. This is delusion, seductive spirits and doctrines of demons that control him and very many Pentecostal charismatic "Christians"

5.) Torp shall be the head of an Apostle-collation, but fornicators and operates with heresy. Scripture says due You blasphemed the name of God among the nations. This is the life of "apostle" Torp who through his life is like a magnet for seducing spirits, and doctrines of devils scripture says.

Could it be that God finds any good in the family Lanton when he only let the house burn up and no one was hurt? We find examples in Scripture that those who were under the judgment of God, then God was pleased with one or more within its the church, community or family.

1 Kings 14 1 At that time was Abijah, Jeroboam son sick. 2 Jeroboam said to his wife: Arise, and disguise you, so no one can see that you're Jeroboam's wife, and go to Shiloh; There Ahijah the prophet, which told me that I should be king over this people. 3 Take thee ten bread and some cakes and a jar of honey and go into him! He'll tell you how it will go with the boy. 4 And Jeroboam's wife did so; she arose and went to Shiloh and came to Ahijah. But Ahijah could not see; for his eyes were dim with age. 5 But the Lord had said to Ahijah Now shall Jeroboam's wife to hear what you would say about her son, for he is sick; so and so shalt thou say unto her; but when she arrives, she will pretend she is a stranger. 6 When Ahijah heard the sound of her feet in the door, he said, Come in, wife of Jeroboam! Why pretend to be another? There am sent to thee with heavy tidings. 7 Go, tell Jeroboam, Thus saith the Lord God: I exalted thee from among the people and made thee prince over my people Israel 8 And rent the kingdom from the house of David and gave it thee, but thou hast not been as my servant David, who kept my commandments and followed me with all his heart, and he did nothing but what was right in my eyes; 9 But you have done more evil than all who were before you, and have gone and made thee other gods and molten images, and thus provoke me to anger, and hast cast me behind thy back: 10 Therefore, I will lead evil upon the house of Jeroboam and will cut off from Jeroboam every male, both minors and in Israel, and I will sweep after Jeroboam, as a man taketh away dung, until it is all gone. The 11 of Jeroboam who die in the city shall the dogs eat, and whoever dies in the field shall the fowls devour; for the Lord has spoken. 12 Now therefore you up and go home! As soon as your feet enter the city the child will die. 13 And all Israel shall mourn, and they shall bury him; he is the only one of Jeroboam who shall come in burial, because he was the only one in the house of Jeroboam in whom there was nothing that the Lord God, delighted in. 14 But the Lord will raise him up a king over Israel who shall cut off Jeroboam house the same day. Dog, what I say? Already now it happened. 15 And the LORD shall smite Israel, as a reed is shaken in the water, and he will root up Israel out of this good land which he gave to their fathers, and scatter them around beyond the river, because they have made themselves Astarte- images and provoked the Lord to anger. 16 And he shall give Israel foe violence for the sins of Jeroboam has done and that he made Israel to sin. 17 Then Jeroboam's wife arose and went away and came to Tirzah; As she stood on the threshold, the child died. 18 And they buried him, and all Israel mourned for him according to the word which the Lord spoke by his servant Ahijah the prophet.

Is it in the family Lanton is the only thing that God finds any good in why he spared them when he gave judgment?

It was only in Jeroboam his son that God did something good and delighted in. So it is quite possible that it is only in the family Lanton that God takes something good. Let's hope and pray that Aina Lanton see that she is pr. Today an adulteress by the word of God when she lives with "Pastor" Jan Aage Torp who is divorced and has no opportunity to remarry after the words of Scripture. Pray that Aina Lanton messing up his spiritual eyes and get out of the relationship she is in, it makes her a person standing in along with one that promotes Evil!

Fundamentally it is only one thing that can get Torp to possibly gone in themselves. It is that he current "wife" who is really an adulteress by Scripture realize what she are doing is really contrary font.

It says right out the following: "whoever marries a man who is separated from his wife, she commits adultery."

Or: "Aina Lanton who marries a man who is separated from his wife, she commits adultery." (Freely translated).

I personally believe what happened was God's warning forefinger to indicate that there is still time to make up his sin and do what is right for your family Lanton.
At Torp is enough defection gone so far with that which I strongly doubt whether it is possible to change and repent. Scripture speaks of those who have hardened their hearts, something one must have done when once again goes against scripture in their life and who also have a teaching that is totally unbiblical in them!

This scripture fits the Jan Aage Torp:
Luke 11 24 When the unclean spirit is gone out of a man, he walketh through dry places, seeking rest; and finding none, he saith, I will return to my house whence I came out of. 25 And when he cometh, he findeth it swept and garnished. 26 Then goeth he, and taketh with him seven other spirits more wicked than himself, and they enter and dwell there, and the last thing gets worse with the man than the first.

Now there are seven evil spirits who rule in Torp's life, hope and belief that family Lanton come away from the man and Oslokirken while there is still time, fly for their lives and remember Lot's wife says I familjen Lanton!