No.. 967: Word of life Pastor Roberth Ekh is that a true copy of Lot, Abraham's nephew who also went his own way and did not find out this living with God!


Word of life Pastor Roberth Ekh is that a true copy of Lot, Abraham's nephew who also went his own way and did not find out this living with God!

Word of Life Pastor Roberth Ekh adultery and divorced his wife for a new lady.
Could this happened elsewhere or is this the fruits of religious movement?

I am convinced that religious movement is not the ideal place for a person vom will serve God. But allikvel, we have a personal responsibility. But how much are we influenced by others? Or we affect others?
Photo by Ulf Ekman who after all have parts of the blame for this fatal defeat that we see Robert Ekh his life. Imagine it, Ekh live in Thailand with new wife. Ekman converts to the Catholic Church. Babel confusion on Life words are really worse and more extensive than anyone could have imagined and dreamed of. 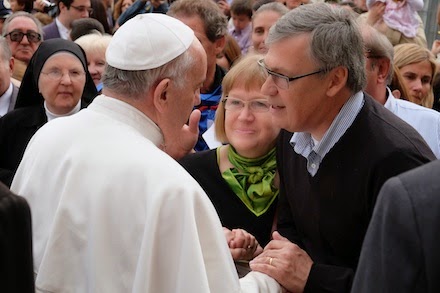 What is the truth about the sordid Robert Ekh?

The truth is that this happened was really no surprise. The man had a worst possible starting point to belong to such an extreme and unbiblical church Word of Life. And even struggling with internal tensions and kites that he probably would never be able to overcome in such a community.

He writes that he was "saved" again when he hit his "new" wife or partner.

The way he has worded in retrospect, have been mighty ugly, unfortunate and unholy facing his former wife and their seven children shared. In fact, better to have time asking if he means what he writes that he was in a very dark and then he hit her and got to see "the light!"

«This letter goes to pastors, school, friends, and others who have worked closely with me over the years at Word of Life, which I value very highly. I've probably forgotten some but maybe on them eventually.

It has now been over a month since I left Sweden. I understand that many were shocked and appalled by what they heard about me. I can not communicate with anyone I know and all that for various motives would like to know more about what happened.

But I think obviously different about you. You are the best people you can imagine, and the community and work with you was a refuge for me during a very pressured and absurd time in my life.

I do not know what you've heard more than the info that the Assembly has received, but you have been for many years, and the school management in recent years, has been some of the most important people in my life and I would like, now when I start coming the balance, to give you a brief description from my perspective.

So far I have only been able try to keep in touch with family and acclimatising me to another life. It is quite different from the press and the stress of Sweden, who broke me.

It is also because I want to ask you for forgiveness. I have betrayed you too.

Most understand well maybe it's a long process behind what I've done. I have no interest or need to mitigate it. But I do not just pull without explaining briefly what has happened.

I have for a long time, many years, evaluated, and also re-evaluated a lot of what I have lived and done. For me this several processes that have been going on within me. It has to do with the work of the LO for 30 years, with all that implies, my role in all of it and of course my inner "demons," and how all of it even affected my and Jane's relationship.

I lived for many years in darkness and despair as I hid in my mind while I was doing what was expected of me. It is strange how one can work in some areas despite total chaos on others.

The experience became more and more that I never was enough to anywhere, all I did was a duty and something that someone else wanted and thought I would do, whether it was about work or anything else. I sank further and further into depression, darkness and hopelessness. I did not sleep, began to forget the most obvious basic things, had no motivation for anything at all.

In the end, almost 3 years ago, I came to a point where I absolutely did not want to live anymore. And, without going into details, when I was traveling and had detailed precisely how I would do it, then something happened that no one could predict.

I searched no and no. I just wanted to end it all. I sank to the bottom in a black sea of ​​despair and nothingness, but someone I do not even know about before then began to pull me up. I can not say other than that she literally saved my life, and has kept me alive ever since. We have met many times since and had daily contact in different ways. That which for me started as pure survival has gradually grown into a relationship, I do not want to live without.

I am of course extremely saddened to disappoint, first and foremost my family and to hurt them, but I could not continue to lie. I really had given up and just wanted to disappear.

I blame it on someone else, my choices are my, my debt is just my. I'm just trying to explain what happened, from my horizon. It's more about my inability to deal with reality than anything else.

I was mentally cracked over time LO is obviously a consequence of my choices. My choices and decisions my debt, I can never escape. And if I should ever forget that there are people who have been tasked to remind me of it.

I was additionally himself involved in building a culture that today I can not embrace.

At the same time, no man from nowhere when wrong things happen and done. Everything has a context, things are connected, one affects the other. Without removing responsibility it is still a reality. No one is an unmanaged island in the ocean where only I can decide everything that happens. Therefore, I can only wish that no one should go through the same thing as me.

You are the best possible, both in the parish and school, and I wish you only the best, both personally and in the work you are doing. Preserving free thought, refusing to go into under duress, let no one else's desire or will or vision or revelation decide over you. Ask the person trying to make it take responsibility for their own lives, instead, turn around and move on.

As I said, I know that I have betrayed even you and made you miserable. It even makes me sad. Forgive !!!

We leser dette letter as Ekh the groin, og the other one we know about ham. It is you who Lot up of Dage. We kunne omtrent hat blåkopi of lift that stands about Lot, og Roberth Ekh.

You can take the dough time selv å lese in Bibelen, ikke at least 1 Exodus 19th

One of those who hadde fulgt Abraham on his Reise til the land of Canaan, was nevøen Lot. Etter at Lot mistet his own father becomes onkelen Abraham takes tenacious of ham, og som several times you with og redder his life fra the greatest fare. In the følgende scale we see spesielt on forholdet mellom Abraham og brorsønnen Lot.

We leser in the first Exod 13 on at both Abraham og Lot hadde been tenacious myeloma småfe og Storfe, hver his great buskap, og at the BLE trette mellom gjeterne deres. In that reach skjedde we see Abraham large sensory transmits Lot. He innser at the Awards for both of them at the skiller s law og finds hver sine beiteområder. But he learns BN get velge first. "You go to the Liberals, so go jeg against the Conservatives. Or if you go til the Conservatives, so go jeg til the Liberals" (first Mos.13,9)

Og BN as the grøderike Jordan Sletten where it was myeloma won, og valgte the Awards area. He settled tenacious in bye Sodoma, og if this bye leser us: "But mennene in Sodoma was meget evil og syndet rough against the Lord" (1.Mos.13,13). There you grapple output å lese about Abraham's generosity toward his nephew, and his "brother" he kaller ham. Selv fikk he ikke et like grøderikt country Lot, but he fikk noe that was so Mye more verdt: God velsignelse! Hør bare lift God sier til ham banquets at he has divorced teams with Lot 'loft reach blikket og see fra it stedet to you, North-over, sørøver, østover og vestover. Hele this country you see, turn Jeg dough og your ætt til ever. Og Jeg skal gjøre your ætt like støvet on earth "(first Mos.13,14-16). Jeg think we have Mye on lære of Abraham rause holdning. Kanskje we da hadde unngått mange "Tretter" mellom Christian brødre, og istedet received oppleve so Mye more of God velsignelse.

In the first Num.14 leser we read of a war that may katastrofale følger for Sodoma, bye Hvor Lot lived. Bye become plyndret, og Lot you blant those who become bortført. Abraham gets høre of lift that has skjedd, og at his brorsønn your tatt til prisoner, viser he big besluttsomhet. He væpner sine 318 veltrente tjenere. Abraham vesle Hær self fiendehæren on flukt, og reddet Lot og de andre fangene. There shall the priest Melchizedek til å erkjenne at it is the Høyeste God who has gitt Abraham seier, og Abraham selv get a witness of his great God for Sodomas konge.

The story in dette chapter Viser us ikke bare Abraham a mektig War og strategist, but også as a Mann with great integrity. For selv if he becomes tilbudt great verdier of congener in Sodoma, yes hele krigsbyttet, so he vil ikke noe have alt dette. Congener in Sodoma would ikke kunne rose tenacious of at he hadde made Abraham rich. Abraham wanted to God would get all ære!

In the first Mos.18 åpenbarer God for his venn Abraham at He has tenkt on utslette byene Sodoma og Gomorrah, the grunn of deres great sin. Abraham goes forbønn for byene, og ask at Lord ikke feel utslette the rettferdige sammen the ugudelige. Til last lover Lord he ate vil spare byene if he finds so mange as ti rettferdige der. He did ikke, og byene gikk over. And Lot og hans familie ble reddet out ødeleggelsen came. We can lære Mye of Abraham lift the vil si on være a forbeder, og if on være utholdende in Bonnén. He fikk også answer to his Bonn da Lot ble mountain, noe that Sies with disse ordene in the first Mos.19,29: "God husket of Abraham".

Lot was a believer, og the second Pet.2,7 kalles he was "the rettferdige Lot," which "ble plaget during the ugudeliges tøylesløse oppførsel". However ikke E. like Lot hadde techno innflytelse the ugudelige round tenacious. Ikke once his egne svigersønner thought the ham when he wanted them sorted fra ødeleggelsen. We Leser: "But for svigersønnene the wood as if he spøkte" (1. Mos.19,14). We reach leser of hvordan Lot ble rock out fra Sodoma, reminding us of et words in the NT as the taler of those who become frelst "gjennom ild" (1. Kor.3,15), menstrual deres works Brenner opp. Hvordan you there with us? Er, we like Abraham or Lot? We live nær og God teaches us lede of Ham, or live in et verdslig life? Er we åndelige or kjødelige? Bibelen portals on begge deler. One day vil it wise tough, reaches "he image scale prøve the enkeltes arbeid" (1.Kor.3,13).