Luke 24 50 Then he led them out towards Bethany, and he lifted his hands and blessed them. 51 And as he blessed them, he parted from them and was taken up into heaven. 52 They bowed down and worshiped him, and returned to Jerusalem with great joy. 53 Since they were continually in the temple praising God.

When one comes to Jerusalem - physically. Then realize one that the small room as the upper room is, so there was room for Jesus and his disciples. That when the last meal there, is probably right.

Luke 22 7 Then came the day of the Unleavened Bread when the Passover lamb was to be slaughtered. 8 Jesus sent Peter and John, saying, "Go and make preparations for us, that we may eat the Passover." 9 They asked, "Where wilt thou that we make ready?" 10 He replied, "When you coming into town, you will meet a man carrying a jar of water. Follow him into the house he enters, 11 and say to the owner of the house, 'The Teacher asks: Where is the room where I may eat the Passover with my disciples? 12 He will show you a hall upstairs, with benches and pillows. There you will freshen able. "13 They went away and found it as he had said, and they did able Passover.
14 When the time came, Jesus went to the table with the apostles. 15 And he said to them, "I have eagerly desired to eat this Passover with you before I suffer. 16 For I tell you: Never shall I eat it more before it has been fully realized in God's kingdom. "

But not the Spirit fell over 120 there and Peter speaking to a crowd in which 3,000 people were saved, it must have happened further down in the temple or in the court. At least not in the upper room, it is simply too small and that it is supported by the scriptures that speak against the understanding that the Spirit fell upon the upper room!

Ten days after, when the disciples were gathered in Jerusalem, probably in the temple, the Holy Ghost fell on them like tongues of fire.

You have heard that it happened in the upper room (Acts 1:13), it was here that they chose a new disciple who took over for Judas, Matthias, but it does not say that they were gathered there at Pentecost (2: 1) .

The disciples often went to the temple (see what Luke says in: Luke 24:53), and it was very likely that they would be there during the Jewish holiday also.

When the Holy Spirit came this happened namely during a Jewish festival called the week's festival, which was celebrated seven weeks after Easter.

They also had to have been in a place where there were gathered many people, it says that there were over 3,000 men, plus women and children (2:41), who became Christians that day.

So there must surely have been several thousand people who witnessed what happened to the disciples at Pentecost.

The place where all these people were gathered, was most likely in the temple in Jerusalem.

This was a very strategic place and time, by the way, if you really must do something about the effect, you would do it in a place where many were gathered from different countries and places at once.

From Jerusalem the gospel was spread around to all the then world, there were people from many places gathered in the temple that day (Acts 2: 5-11), and began to believe in Jesus, and believe in God. 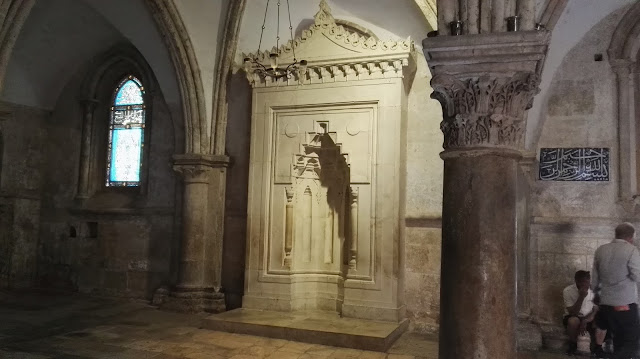 Image where the Spirit fell probably, in and around the temple. Here you can see from the upper room, down against the current Cutting Mosque. Down there occurred both that 3000 was saved and that the Spirit fell. 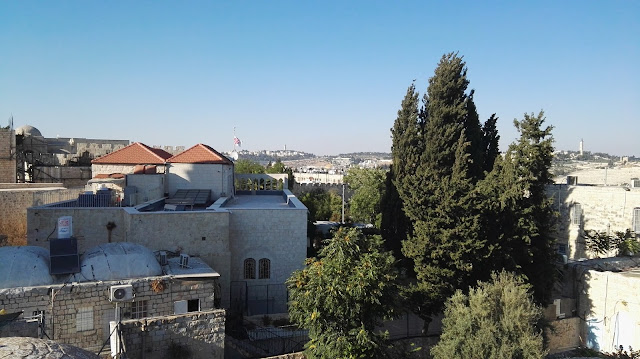