No. 1283: We ended up in Gay Parade in God Himself by Jerusalem!

No. 1283:
We ended up in Gay Parade in God Himself by Jerusalem!

Picture this parade. Were most visitors? None that we hit on Jerusalem was posetiv to this parade, all as a negative. Is there an event that is artificial? Blue. there was a girl who had been killed a few years ago they played in to collect support. Sad that such may occur, especially in Jerusalem. 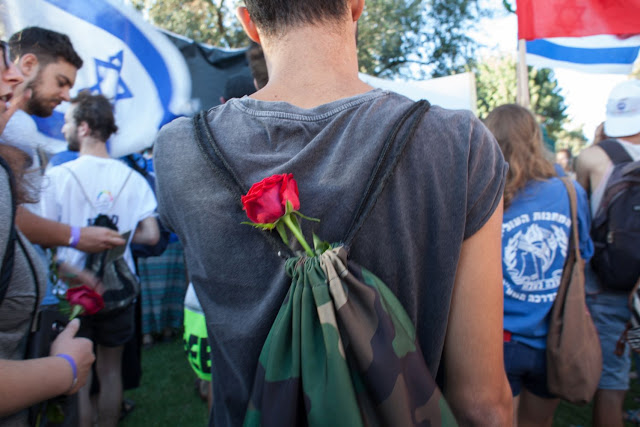 We were down in Israel in a few weeks, everything has been really great except for one thing. There is only one thing that was perceived as very strange, it was a great Gay parade in God Himself city, Jerusalem.

Talked to many Jews, not one that was posetiv thereto by those we met. Not least those who live in Jerusalem and were Jews. We felt that public transport and everything was diverted, to provide space for a parade that God's word is totally reprehensible, then God himself is against this! He has created us to a man and a woman, who will be living in a committed relationship for life. Everything outside of this is sin in God's eyes!

But once, when I read my commentaries I wrote well five years ago, so I realize that this is also foretold in God's word. So it comes as no surprise.

Joh. e. 16. 1. This I have said that ye be not led to a fall. 2 They will expel you from the synagogue. Yes, there comes a time when anyone who kills you will think that he performs a service to God. 3 They will do this because they neither know the Father or me. 4 I have told you that you, when the time comes, remember that I said that.

It is interesting to read what Jesus himself says, he says this is going to happen. Whether it is posetivt or negatively, we know as believers that. Therefore, even a Gay parade in Jerusalem, city of God. It comes as a surprise, this, I taught several years before we ended up in it.

See here, my commentaries Revelation 11. 6 They have power to shut heaven, that it rain not during the time they are prophets; and they have power over water and can make it to the blood and power to smite the earth with all plagues, as often as they want.

They have the old Testament Prophet deed in his career where one is Lord also of the elements and they have the power to both make and dead. Compromising fire out of their mouth is biledelig speech the ancestral words they utter.

7 And when they have finished their testimony, the beast that rises from the abyss will make war against them, overcome them, and kill them.

They will have their work in the first part of the great tribulation. The animal which it here refers to is the Antichrist. He will kill them after having waged war with them.

8 Their bodies will lie in the street of the great city which spiritually is called Sodom and Egypt, where also our Lord was crucified.

The bodies are lying in Jerusalem where Jesus died. Here is Jerusalem mentioned litte flattering as spiritually Sodom and Egypt. Sodom's sexual sins that are also abnormal as, inter alia, homosexuality is. Egypt here otherwise represents a space where the Antichrist and the world has taken seat.

9 People of many nations and tribes and tongues and nations shall see them lying there for three and a half days, and they will not allow anyone to bury them.

That they will remain dead for three and a half days is that they will show the world that they are dead but Antichrist live. That way they show their triumph!

10 And they that dwell upon the earth shall rejoice and revel in their fate and send each other gifts. Because these two prophets had tormented them that dwelt on the earth.

That they have been a great nuisance to people talking about their great and powerful influence. Now when they are dead is the "Christmas Eve" for the wicked and unbelieving people. Who choose the Antichrist and his regime.

11 But after three and a half days the breath of life from God entered into them; they stood up and stood on their feet, and those who saw them were terrified.

But Satan will never have the last word and ultimately prevail. It always makes God and those who go with him. They are quickened as many Bible also was. And when the Gentile world see it being struck with fear, great fear.

12 Then they heard a loud voice from heaven saying to them: "Come up here!" And they ascended to heaven in a cloud, right before the eyes of their enemies.

We go recognition of how Jesus and the church were uprooted. Also on how Enoch was caught up and that his message lived on after his rapture.
Jude 14 It was also about those that Enoch Adams descendant in the seventh paragraph, prophesied when he said, "Behold, the Lord cometh with his holy angels in thousands 15 to execute judgment upon all and require all godless accountable for all the wicked deeds they have done and for all the defiant words they have made against him, the wicked sinners. "16 they are rebels who complain of their fate, but live according to their desires. They brag and use big words and flatters others when they benefit from it.
The message always live on no matter what happens to the messenger.

13 In the same hour came a great earthquake. A tenth of the city collapsed, seven thousand people were killed, and those who were left, were terrified and gave glory to God of heaven.

See here: 8 Their bodies will lie in the street of the great city which spiritually is called Sodom and Egypt, where also our Lord was crucified.

The bodies are lying in Jerusalem where Jesus died. Here is Jerusalem mentioned litte flattering as spiritually Sodom and Egypt. Sodom's sexual sins that are also abnormal as, inter alia, homosexuality is. Egypt here otherwise represents a space where the Antichrist and the world has taken seat.