No. 1305: Even in Jan Aage Torp's children say the same as me, only I should be punished for saying the same thing!

No. 1305:
Even in Jan Aage Torp's children say the same as me, only I should be punished for saying the same thing!

Here are the children who today are traumatized!
Manglerud Oslo police relying on him, talk about being on the wrong side of the law!
Here, Polti and Norwegian court it is possible that these and other children will be even more adversely affected when someone hiding behind its total failure and seductive religion. Here the Christian religion, though this is so distantly from Christianity it is possible to come! 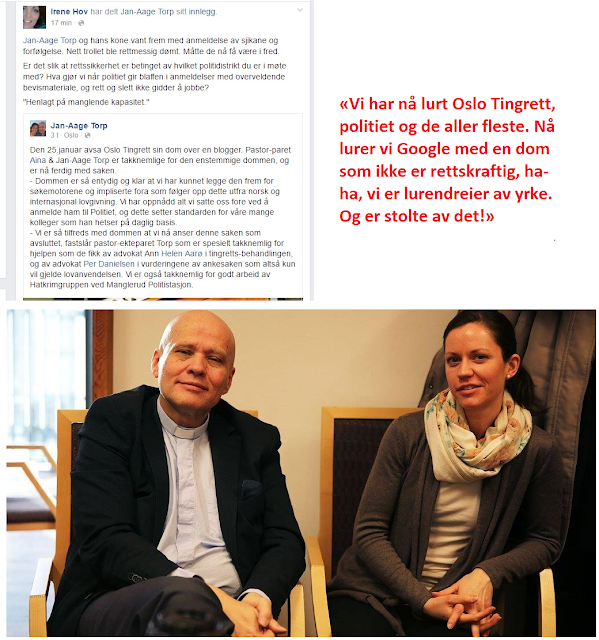 The world is strange, but one thing is good to know. The truth always prevails in the end!

Jan Aage Torp, who has managed to lure police and Norwegian law.

A true story about the effects of extreme exorcism!

Aftermath of exorcism - trip to the emergency room

It was her second time on the way to the emergency room by ambulance. My little sister Christine is 16 years, she kaldsvetter, is terrified and think that she is going to die.

I know my little sister very well and sits in the passenger seat next to the ambulance driver in front of the car, and I hear the ambulance personnel in the rear trying to talk reassuringly to Christine.

Christine crying, breathing shallow and quick. She can not talk relationships and barely manages to whine until she has pain in the chest, back and abdomen.

I do not quite understand what is happening - I think about various symptoms and possible diagnoses. I think that perhaps it is the lung that has collapsed.

The ambulance stopped and I go out of the car. The stretcher is wheeled into the emergency room while I go next door to hold Christine in hand. I remind her to breathe quietly and tells her that everything is going to go well. Christine manages eventually to tell about a dream she has had several times over the past few years.

Several times Christine had this dream and she has been so scared when her waking that her sickness or barricaded and hidden in the basement. Christine is afraid almost constantly. She is afraid when she walks on the street and she gets scared every time she sees an African.

At the moment I think it was incomprehensible why Christine was afraid Africans - so I asked why. She replied, "it was they who did it." I did not even think a second before I realized it - so clearly it's exorcism-rites conducted by Zambian exorcists in Norway. Christine was only 12 years old when she was subjected to exorcisms summer of 2007 under the auspices of the Healing Center in Dronningensgate in Oslo.

There was nothing physically wrong with Christine. This was something mental. The doctor called it an acute anxiety attacks. Christine told further about the pain she almost constantly known. She had cut herself with a knife 9 times since the summer of 2007, and she has had repeated thoughts of suicide - she was only 16 years old.

The doctor who treated Christine worked also happens to 50% in a psychiatric institute for youth in addition to the job at the doctor, and the doctor had good experience with this type of seizure - but she is shocked by what it is Christine has been through.

Christine told the doctor about exorcism-rites, breathing techniques and how they Zambian pastors / exorcist casting out devils from people. Christine got post-traumatic stress syndrome as a diagnosis - this on no other basis than exorcism-rites she was subjected to 12 years old at the now defunct Healing Centre in Oslo.

Fortunately, I ascribe that Christine today are doing well after two years of treatment in child and adolescent psychiatric clinic.

This is a true story!

Extremism of this sort should not have fertile ground in one free country like Norway. The saddest thing about this post is that Christine is NOT the only ones who suffer the consequences of the kind of fanatical groups lurks around in Christian Norway.

Why is Norway's Christian leaders silent?