No. 1303: Ruth and Marius Bodnariu; the couple in Naustdal Municipality in Sogn og Fjordane, who is accused of violence against their children, have moved to Romania!

No. 1303:
Ruth and Marius Bodnariu; the couple in Naustdal Municipality in Sogn og Fjordane, who is accused of violence against their children, have moved to Romania! 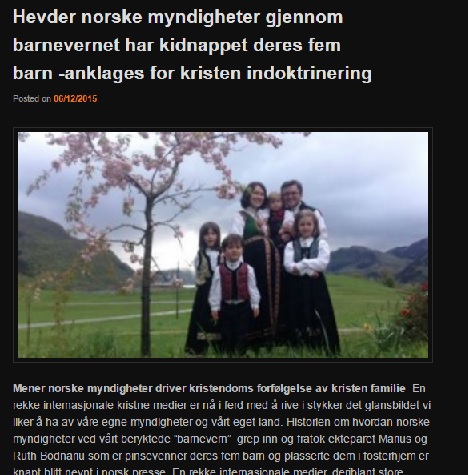 A senvinterdag in 2004 I got a call at work from my wife.
She was devastated, our children were taken by child welfare while we were at work.
Why?
Of course it was just false rumors that CPS spun on, these servants of Satan. If there had been some distance in this, so just all been resolved with a single call. It was all that was required. But here they made an emergency decisions, put it into practice to try to crack the Christensen family. They succeeded not at all, I knew who was behind. It was no good, or God.

Eventually, as they tried to negotiate with lyving, truing and all that is possible. To avoid a trial, but we knew this was Satan behind. When we had been the best and most loving parents.

They said, among other things if they received at least man, so we should get to have the two biggest. And other lies and Satan formulations. The trial came in early summer 2004 and we won on all counts.

Now there is a Christian couple who have been exposed to the same. What did? After winning forward? They do it right, escaping the country.
They did as I said, moved.
I personally had moved to Denmark if we had been subjected to the same by the Stalinist government that is here in Norway again: http://www.dagen.no/Nyheter/nyheter/Voldstiltalt-foreldrepar-har-flyttet-fra -Norway-374893

Violence on Trial parents have moved from Norway!

The Norwegian-Romanian parents couple in Naustdal Municipality in Sogn og Fjordane, who is accused of violence against their children, have moved to Romania.

CPS took last autumn care of their five children, and the parents were charged with the police termed as nurturer violence. The case has created huge commitment and strong reactions, and in other countries - both in Europe and in North America - there have been widespread protests against the Norwegian child welfare. This summer parents kids back, but the police took charges against the couple.

NRK confirms the couple that they now reside in Romania, and they do not come back. The couple do not want to be interviewed, but has written a letter to the Child Welfare Services in their home municipality. They write, among other things:

- By moving from Naustdal we leave our immediate family and the places that were the reason we moved to Naustdal 10 years ago; we leave our good and close friends and neighbors; we leave safe and exciting working with supportive and good colleagues; we leave our home as we have invested all of time and money in order to create the best childhood for our children.

(Read the letter in full below)

Children father's lawyer, Ragnhild Torgersen, says the couple have not moved to escape criminal liability, saying they would come back to trial. It is not yet certain when the case is scheduled for trial.

In an interview on Romanian television, the couple admitted that they have given the children pat on the butt and pulled them in your ears - even though they knew that such upbringing methods are illegal in Norway.

Police Attorney Sissel Kleven Western Police would not comment on the matter.

Letter to CPS
Here is the letter parents sent to CPS:

We hereby make it known that we move from Naustdal.

Having regained our children earlier this summer traveled the whole family on holiday to Romania. Here we decided to become a permanent resident.

Summer vacation came very conveniently and was absolutely necessary for us. It gave the whole family, especially children, the peace and security that we needed, but we unfortunately no longer be able to experience in Naustdal.

During our vacation, we have known in an urgent need to change their residence. It is an idea we had before when we've wanted their children to learn Romanian culture and language. Nevertheless, we have previously chosen not to move from Naustdal with all the sacrifices it entails. By moving from Naustdal we leave our immediate family and the places that were the reason we moved to Naustdal 10 years ago; we leave our good and close friends and neighbors; we leave safe and exciting working with supportive and good colleagues; we leave our home as we have invested all of time and money in order to create the best childhood for our children.

We choose now away all this, which is a very high price for us to pay. We do it anyway because it is impossible for us to live with Naustdal child welfare as a universal and ever-present factor in our lives. During their stay in Romania, we have seen progress and well being of our children. Here they have been able to lower their shoulders and feel confident that they can not be separated from each other and that they will live with us. No one comes suddenly and retrieves them and keeps them separated and from his family indefinitely.

Our children were severely traumatized by the process welfare service started before Christmas in 2015, and ever since they came back to the family, they were worried that the process will repeat itself. We have tried to convey this to the child welfare service in Naustdal, but has not been heard.

It is very sad that the child welfare service in Naustdal unable to realize that its actions and decisions have a negative impact on our children, our family, our extended family and the society we have been a part of. For us who have to live with the child welfare service as a constant factor in life, perceived it as unprofessional, empatiløs, inhuman, and without the ability to see the value of family and the important bond that is between parents and children.

During our holiday, with the whole family together, we have experienced our children as less strained, while contact between parents and children has been restored. The children have during the summer even expressed a desire not to return to Naustdal, and after we decided not to go back, the children expressed concern that we would change our minds.

We know that we are not infallible and that we as parents also have made mistakes. After the return of the children we have had good cooperation with specialists, who have made sincere thought of our family and who has also guided us parents. We have come out of this stronger, without child care service seems to take it under advisement. We are going to maintain contact with the specialists, while we have made contact with Romanian specialists will follow up our family's development, and that will help us in the process which we now find ourselves.

The family's experience with the child welfare service is fresh and the manifest and latent damage is incalculable. Something can be corrected, while others may never recover completely. Such is not known, but we hope and believe that with time our family will be fully healed.

I waited for it. Our Stalinist welfare've got another family to leave the country with their traumatized children to shield children from more traumatizing abuse of these dangerous power people. This is a shame for Norway!
And of course do not take these public perpetrators self-criticism - instead defended those of both politicians and councilman. The system has been such that no system dares to criticize each other. And the media is remarkably silent on this matter. All of you fools makes me both angry and embarrassed on behalf of Norway.

And now these incompetent Naud use all rettsspparatet and hundreds of thousands of crowns to straffeforforfølge these loving parents because they gave the children a pat or two on the butt. May God help us against these complete Naud. It was CPS who were sitting in the dock, not those great parents.

It's good that day only imparts facts about what has happened. Otherwise noticed that this newspaper did not support the family when the case stood at most.
But the authorities in Norway will check run assault case against them in court, and they get convicted because klypping ear and slap on the butt sometimes (which is not good while almost all Norwegian 50 year olds may have experienced in childhood).
While three rapists go free after case in Hemsedal.

They risked 6 years in prison for this "crime" I read a space. Norway is still a "soviet government" persecuting dissidents so they must flee the country. A great shame for our country.

The letter from the parents expressing the thousands of parents experience in meeting with the so-called CPS: More or less callous them, they who do not understand the children's needs for the family.