No. 1308: It's at a fault to you go to law against one another. Why do ye not rather take wrong? Why tolerate not rather be hurt?

No. 1308:
It's at a fault to you go to law against one another. Why do ye not rather take wrong? Why tolerate not rather be hurt?

Photo by Jan Aage Torp and unfortunately his new wife Aina Lanton as scripture says is an adulteress, and Jan Aage Torp an adulterer and fornicator!
Scripture says very clearly that Torp will either be reconciled with his first wife, Ann-Christin, or live solitary. If he does anything else, he breaks the marriage and makes his first wife guilty of adultery when she is also now re-married. 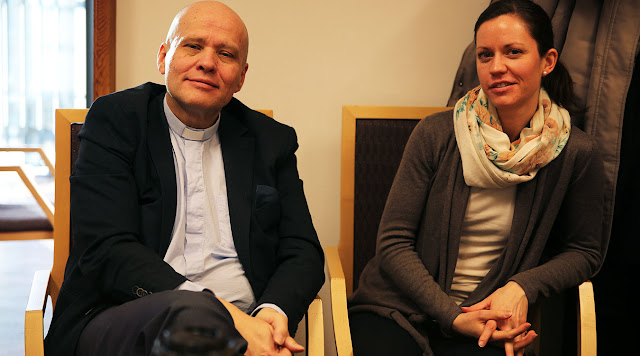 1 Cor. 6. 7 That's at a fault to you go to law against one another. Why do ye not rather take wrong? Why tolerate not rather be hurt?

My commentaries Hebrews 12 14 careful to live in peace with everyone and striving for holiness, for without holiness no one will see the Lord.

That these things had created large and internal strife in the church in Jerusalem is quite understandable. When discrepancies surfacing will also struggles with that rule. But so shall it not be,

Therefore it is necessary that the sanctification process accelerates and increases throughout his life!

15 See that there is someone who allows God's grace go by! Let no root of bitterness growing up and cause damage, so many are infected by it.

Paul addressed clear who made strife. There were those who passed away from the free grace in Christ and the law, and allowed himself works of the flesh.

But while one must always watch out not to let any root of bitterness growing up.

Room. 16. 17 I beseech you, brethren, mark them which cause divisions and others fall by going contrary to the teaching you have received. Stay away from them. 18 The kind of people do not serve our Lord Jesus Christ, but their own belly. With fine words and platitudes leads the gullible people astray. 19 But everyone has heard about the obedience you show, and therefore I rejoice over you. I want you to be wise in what is good, but innocent in evil.

16 See that no wedlock and living wicked Esau, who sold his birthright for a meal.

Here was a church that survived more apostasy a revival \ renewal. When the fire glow and love disappears so will also sin and secular morality in!

Then not the word of God precious longer and live and follow important.

Psalm 119. 4 You have given your orders that they should be strictly observed.

17 For you know that when he side would get his father's blessing, he was rejected, though he weeping requested it. For he found no way to repentance.

An apostate and carnal heart thrives in sin but not with the consequences and effects of sin. As Esau lived is a result of a heart that has turned their back on God. One who sins is not a sinner only when he sins but it begins in the mind long before an active action.

2 Cor. 10. 4 For our weapons are not of people, but they have their power from God and can add strongholds to ruin. We tear down imaginations, 5 and all big and proud that rises against the knowledge of God, and we take every thought captive to the obedience of Christ.
(End of quote).

Firstly, I have not reviewed January Aage Torp for anything but fictional review of me. When it was his enormous hatred against me and the Heavenly blog for our preaching against remarriage that Jan Aage Torp found on reviewing me.

Secondly, in conciliation on 8 January 2015 I offered January Aage Torp everything possible to offer him. That I could change all words and expressions which he disliked and replace or re-write what he wanted. This declined in January Aage Torp empty!

What more can when I do? Nothing! Or should and could have done? Nothing!

It is also January Aage Torp which is a strong in this case. I get shit and another by most as Torp is recognized preacher from before, although he lives in adultery as Jan Hanvold and many others do! This is no obstacle longer in Christian Norway, therefore it is wrong to give the blame on me!

Now the appeal fortunately upheld in Borgating Court of Appeal. Then I think it's very possible that the case is reset and all identification appears in a completely different way than what has happened until now!

I do not know the outcome of the case, but for me it is totally illogical and unreasonable that I should be allowed to write on their blog. Looking at the § which police have used against me. So I doubt very strongly that it holds in the face of Borgating Court of Appeal. When I've never approached January Aage Torp.
BUT HE EVEN CHOOSE EVERY DAY CLICKING THE INN ON THE HEAVENLY BLOG, FOR THERE TO BE provocative and LAR HATE IN HIS LIFE GET FOOD!

Scripture says, "Let no root of bitterness growing up and cause damage, so many are infected by it."

It's just this Jan Aage Torp has done and is doing, even though the scripture says that we as believers should not go to the secular authorities for our "right" through. But we'll let the Lord judge, and the judgment will he take care of!

I have written something about this before, look at these links and other things I've written so you can get formed a picture of the whole.
And above all, pray for me, my ministry, case and all implied that God would get their way, will in ours everyone's life and ministry!

Recommend you to read these before you accuse me of running case against January Aage Torp when it was he who came with her fictitious review of their hatred towards me and the Heavenly blog!

I have come with two motanmeldelser in this case.

1.) Jan Aage Torp makes false accusations against me as it is solely my views on remarriage and divorce Torp hate. Not the others I have written, that he has even gone a lot longer than me verbally!

2.) Torodd Fuglesteg and Ansgar Braut has well break the most possible of laws persecuting me and my family? They are arguably Norway's two worst-line roll that belong a space, in prison. In many ways, one can say that these three here is like an evil trinity!

Sad that the Christian press cares so little about this matter.
Winner Jan Aage Torp forward it freely forward in controlling the free written word.
Actually, I should been given free word rate + much, much more!