No. 1233: Apostle Meeting in Jerusalem as the first "council" went against homosexuality, lesbian Dispense and remarriage from day one in the Christian congregation!

No. 1233:
Apostle Meeting in Jerusalem as the first "council" went against homosexuality, lesbian Dispense and remarriage from day one in the Christian congregation!

Photo apostle or church meeting in Jerusalem in approximately years 49-50 AD.. This is not original but a painted picture where one imagines so it could have been. 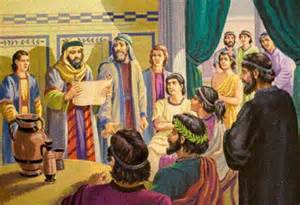 Acts 15. 28 For the Holy Spirit and we have decided not to put any other burden on you than these necessary things: 29 to abstain from things sacrificed to idols and blood and things strangled, and from fornication; if ye guard yourselves from these things, it will go well for you. Live well!

Here it was built up over many years that it had to be a clarification of what the Mosaic law that applied to God's church when Gentiles were incorporated. What and how much?

The apostle Paul describes this in Galatians first chapter. See my commentaries Galatians;

My commentaries Galatians 1 18 until three years later I went to Jerusalem to hear more through Peter, and stayed with him for a fortnight.

Because of the simple fact that Paul says when he went to Jerusalem, we may put this event to about 36-38 AD These meetings between the brothers had obviously of great importance, talking face to face with someone is priceless and can not be replaced by anything. Two weeks was enough together.
Furthermore, we must take the decisive congregation meeting in Jerusalem about year 49 Ap. Gj. 15. 1-35.
This meeting is very crucial to the evangelical freedom. Should we have with some of Moses, and some of Jesus as the basis for salvation? Paul lovfrie læresyn prevailed and are fully felt. Thanks, praise and for that!
19 Some of the other apostles I visited not only James, the Lord's brother.

James, Jesus' fleshly "brother visited him well. Historical sources describe him as a very respected and recognized leader of the church in Jerusalem, adding that he was looked up to by both Jews and of them (Jews and others) who eventually became believers in Jesus.
(End of quote.)

Apostle Meeting in Jerusalem - crucial for the Christian congregation what we believe and teach today!

In time, as more and more Gentiles came to believe, was crucial how one would stand before the law of Moses. What and how much of the Mosaic Law would apply to Gentiles who became believers.

We read then what they came to conclusion of what they were dealing with.

Regarding female preachers, that question was not raised. Why? Actually had Jesus views on women have taken a quantum leap with the woman and the man were equal in Christ. But it was not this that should be addressed, but the relationship between the Christians and the Mosaic Law. When Gentile and Law!

Cause of controversy are the two sections of the word of God in Galatians 2 and Acts 15. In Acts it emerges that someone came down from Judea and began to teach people that unless they followed the custom of Moses, and let himself be circumcised, they could not be saved. (Acts 15: 1). It was this that led to the fiery debate that church sent Paul and Barnabas to Jerusalem. (Acts 15: 2). In Epistle to the Galatians, we hear the same. In the letter, Paul writes that "but not even Titus, who was with me, and who is Greek, was compelled to be circumcised. This requirement came from some false brothers who had crept in to spy on the freedom we have in Christ Jesus, that they might enslave us. " (Epistle to the Galatians 2: 4).

It was the law of Moses - what of it which was important for us Gentiles to take with us into the new life with God in the Christian church with Jesus pagans who were not Jews by birth or proselytes!

That there should be female pastors and elders was in many ways a matter of course, there were no women present during this meeting. But there were still other significant things they came forward, that we as Gentiles shall comply with the utmost importance!

We read in Acts what the conclusion was:

Acts 15. 28 For the Holy Spirit and we have decided not to put any other burden on you than these necessary things: 29 to abstain from things sacrificed to idols and blood and things strangled, and from fornication; if ye guard yourselves from these things, it will go well for you. Live well!

There were four things that those Gentile should remain in from:

1) That you abstain from things sacrificed to idols

4.) Hor; if ye guard yourselves from these things, it will go well for you. Live well!

The people were just as wicked and immoral before as today!

But what applies to God's church? What is true is primarily teaching found in the New Testament. Where the word of God clearly states that marriage is reserved for a man and a woman - a lifetime!

There is no such thing as innocent and guilty party, it is one of Satan's many lies! But it lasts a lifetime - marriage!

All without passing this is untrue, as we as Gentiles should keep us from!

We have written about so much in the Heavenly blog that we refer to other articles about this topic!

Hor is everything cohabitation without marriage past. The one is first married, until death do us. Only grounds for divorce is death, nothing else after Jesus and Paul's teaching throughout the New Testament!