No. 1253: Woe to those who call evil good and good evil, who put darkness for light and light for darkness, who put bitter for sweet and sweet for bitter!

No. 1253:
Woe to those who call evil good and good evil, who put darkness for light and light for darkness, who put bitter for sweet and sweet for bitter!

Photo of John the Baptist's head that was cut off when he preached against divorce and remarriage. It is very strong spiritual powers behind to speak against such a widely accepted and unbiblical shame! This is the "rights" all want, even believers. But God's word says that remarriage is adultery, fornication and sin!

It was served on a platter, it should look as "right" and delicate out, that is exactly the same what I experience today through the false apostle January Aage Torp and police at Manglerud in Oslo. It should look as nice and great what they do, but they run only the evil errand! 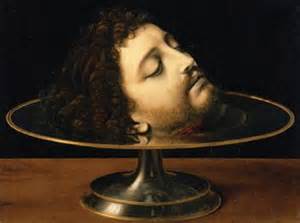 In the 1600s got citizens many fines for sins "leiermål" and attempts divorce and remarriage. Today, the same fines to those who point out the sins, it is thus completely reverse the past.

There are those who claim it is unbiblical to mention the sins concrete and individuals. But it is so wrong and incorrect it might have remained. John the Baptist went against divorce and remarriage. It was when he mentioned the relationship and people concretely that he lost his life. This we read about John several places in the word of God.

Matt. 14. 3 Herod had seized John and bound him and put him in prison for Herodias, who was his brother Philip's wife. 4 For John said to him: It is not lawful for thee to have her.

Here we see that John the Baptist said both people and sin concretely it follow that he lost his life. Here I hear again and again what is unscriptural, do not mention things concretely and not be specific. Figures in major twists and general. It may be right sometimes, but not always. We must also be concrete and specific!

From my commentaries Mark's Gospel 6. 14 King Herod heard about Jesus, for his name had become well known. Some said, "John the Baptist has been raised from the dead. That is why such powers are active in him. "

Herod Antipas was originally married to a daughter of Aretas IV Philopatris of Nabateans, but divorced her and married Herodias, who was his niece and had previously been married to his brother Herod Boethus, she had her daughter Salome with. Aretas' daughter returned to his father. After a further dispute on border issues went Arete war against Herod Antipas.

But he had now come into deep conscience pangs.

Jesus had the same conversion preaching of John the Baptist. But otherwise he resembled more the old Testament prophets to make, signs and prophesy.

For Herod had him resemble most in John the Baptist when they both hit him my conscience with his preaching about zero tolerance of remarriage.
17 It was this Herod who had sent out people to seize John, and had thrown him into prison and bound him. This he had done because of Herodias, who had been married to Philip, the brother of Herod. Henne had Herod married,

John the Baptist was the son of Jewish priest Zechariah and his wife Elisabeth, who was Mary's cousin who was the mother of Jesus. It is told in the Bible that Mary visited Elizabeth while they both were pregnant, and the child then "jumped for joy" in her stomach.

18 and John had said to him: "It is not lawful for you to have your brother's wife."

We read in the law that remarriage that here was not allowed. While his brother lived could not take his wife in marriage.

3. Exodus 20. 21 When a man marries his brother's wife, it is folly. He dishonors his brother; they must not have children.

19 Herodias was looking for John and wanted to kill him, but she could not put it through.

Here was the new wife of Herod Herodias would have John the Baptist killed but could not get put it into practice. Herodias was the daughter of Aristobulus, son of Herod the Great. She was first married to Prince Herod Philip, son of Herod the Great. They had a daughter, Salome. Later, she left her husband in favor of his brother Herod Antipas. This was contrary to the law, and provoked great controversy. It is said that John the Baptist criticized them for this, and was thrown in jail.

20 For Herod respected John; he knew that he was a righteous and holy man, and kept him safe. When Herod heard him, he was troubled and perplexed, yet he heard often on him.

Herod had a different relationship to John the one his new wife. For he heard him, he was troubled and perplexed, yet he heard often on him.

21 But then commanded it an opportunity: on his birthday gave Herod a feast for their premier officials, officers and the leading men of Galilee.

It is a time for everything saith the preacher. It turns out that there will always be given an opportunity to both the evil and the good. Everything what is in one's heart will be allowed for before or since.

22 Then came the daughter of Herodias danced in and. Herod and the guests were so taken with the king said to her: "Ask me what you want, I'll give you that."

The daughter of Herodias danced Salamo into everyone's hearts. That she was both talented and appealing was quite sure. But Herod was dazzled and through wise.

23 He swore at it and said, "Whatever you ask me, I will give you, even if it is half my kingdom."

Now had Herod promised more than he could almost hold. Praying that someone can get half the kingdom is to request that the other party will get everything that one could wish for.

24 She went out and asked her mother, "What shall I ask for?" She replied, "The head of John the Baptist."

Here did Herodias opportunity to let their evil intent be implemented.
Asking for someone's head is the same as asking to have them killed and executed. It is inconceivable how vicious some may be, and here was a woman who was behind the execution of John the Baptist because of his preaching against remarriage.

25 Immediately she hurried to the king and said what she wanted: "I want you immediately give me John the Baptist's head on a platter."

Here was the daughter also been his mother's evil servant. The saying goes that the apple does not fall far from the tree. And it's sad when evil will be continued by the offspring.

26 The king was deeply distressed, but because he had sworn, and while guests listened to, he would not say no to her.

Here there was a king and head which had put itself in an extremely difficult position. Either lose face and maybe his new wife or be a killer and get John executed.

27 And the king immediately sent an executioner with orders to bring the head of John. He went and beheaded John in the prison,

King chose Satan's way of God. Sin always want more and more. Opens than his first up for sin so know one how bad it gets before a standing in the midst of it.

28 came with head on a platter and gave it to the girl, and she gave it to her mother.

When one believes one has toyed with sin as toys it with you and have full control. How did Herodias his way, the evil their way through. John the Baptist short life and service was over.

29 When his disciples heard this, they came and took his body and laid it in a tomb.

John the Baptist's disciples wanted him to lie in a tomb. That one would like them to lie in a grave that one believe in a resurrection of the dead. We read several places in the OT that having a tomb is very significant crowded!

There are always those who will rise up against you, and who have bad intentions. They will tell you how wrong you are taking, how unbiblical you are. Where disbelief and little faith you are, unloving, profane, and all it really is just nonsense!
Then we have to stand firm in God, and he will give you and me victory, deliverance and progress!