No. 1177: Kjell Andersen and Søkelys has revealed himself as narcissists, and without empathy when they criticize me for not able to have a little satire and "fun" at the expense of others!

No. 1177:
Kjell Andersen and Søkelys has revealed himself as narcissists, and without empathy when they criticize me for not able to have a little satire and "fun" at the expense of others! 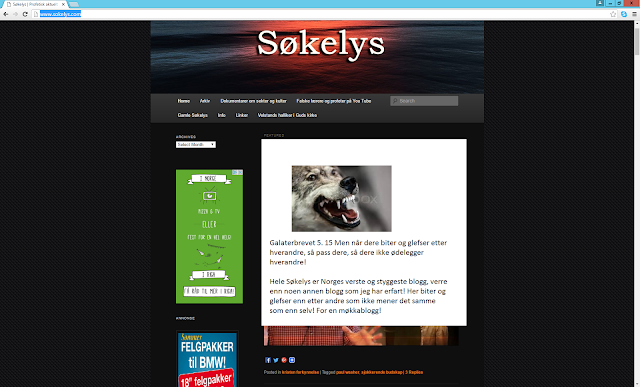 Having beheld Christensen operations in recent days and discovered a man who in desperation resorted to manipulate the layout of a number of sites, including the disputed JKC-altering blogs "Smyrnabloggen", Searchlight and blog to Jan Aage Torp in Norway in Day with pasting over the original content on your blog and replace it with your own sick attitudes limit is reached. The "Heavenly Blog" and Jan Kåre Christensen now appears more junk than the so-called "false Smyrnabloggen" driven by Ulf Arne Breen. Although Breen's blog which is a satirical website now appears more serious than Christensen's blog and therefore we will refer our readers briefly to this blog if they want updates about the activities of this blogger. Searchlight will henceforth only mention it directly concerning police criminal case against Christensen and therefore we refrain henceforth from commenting or answering all Christensen's outrageous accusations against everything and everyone.
Christensen case is in no way about themes remarriage but if a man's urge to officials he considers as his bitter enemies. We see now clearly when Christensen is now on par with sites like "http://herregud.com/" and "http://hedning.no/".
(End of quote).

Notice Narcissist. Everything I write is wrong, everything else writes is fun and very good!

1) Kjell Andersen takes not that I write only in his own blog, where I defend myself ia facing a sea (somewhere between 10 20 000 when the number is formidable) with hate speech I have received from Searchlight, Jan Aage Torp, the false Smyrna blog, newspapers Day, VL and others.

2.) That I have been infringing, harassed and lied on is to live with myself. But here are completely proved my family and supporters drawn into. This does not take Andersen with at all. Let me stop by point two in this article.

When they have failed to frame me, so they have gone on my family and my supporters these who obviously hates and dislikes me and the service I have from God and men.

Let me mention a few examples. So Andersen lack empathy and understanding are thoroughly revealed!
I mention just ten points, but could have mentioned at least hundreds, yes, hundreds.

1.) What Randi Ingwersen has been postponed by Jan Aage Torp when he hung her out as separated and co-founder of a Christian party that stood in ledertog with me. There are unequaled when it was so simple, lying and fabrication that only a fool apostle who could come up with something like spray.

This was a party Torp say I stood in ledertog with, and I do not know who those people are today. That Torp will ever regret that he lied and spread false rumors, I think he will never do!

Randi Ingwersen was in an unsaved state married with a husband who had been married once before. This is under the blood.

While January Aage Torp divorced and re-married as believers and "Pastor".
This reviewing Bible as adultery, fornication and sin!

2.) Eva Nilssen Preserved me in Searchlight. During half an hour was her whole life story, where she lived and the phone number was out there. A warning that whoever stood up for me, they would go as bad with!
No, all sites of Torp, false Smyrna blog, Searchlight and standing with them, is really as corrupt and bad!

3.) My son was first truent to come forward as gay, secondly so he did not answer at this shit. So we went there one day or for two, then was this lie posted on Searchlight and the false Smyrna blog. Which also lies out there yet. This is too bad and criminal that everything in this matter otherwise, so little things to work. But down a missing police, so it's just a free-!

4.) My whole family will be posted with the full names and all. Although they have never taken part in this debate.

5.) My whole family must take the burden that the police are completely in the evil and the evil side here. Everything is allowed to write about me, my family and supporters. Whereas if I write or speak anything, then it is punishable, harassment and I do not know what. I also called Norway's most secure stalker although I have never visited any of those clergy and lying on me. But stalker, I am! I write only in his own blog and website. Has own youtube channel etc. everything far away others, but stalker I am! We are talking about a police and people who are worse than the one found in North Korea and Saudi Arabia revealed. Where they take all, but here it's only me to be taken, no other matter!

6.) They lie on my morale, why? Because it's there Jan Aage Torp stuck. Then it will be to attack me for having burst, where I do not have burst but Torp has not just burst. It's like a large crater in his life!

7.) My wife gets personal mailer, both private and business mail. So is also the school management plugged in where it is claimed that she goes with firearms in your purse etc. I could write a book just on this point, as it is so bad and we have a police force that is absent when it comes to me and my family . I stop here, because this is so serious that words are inadequate!

8.) It is also strange, what I write. Although there is as a fraction of what Torp and his poodles and lackeys writing and speeches. So all I do is beyond, then I get a lot of diagnoses that I have mental retardation, asparagus syndrome and I do not know what. But Torp gets really hear the same thing through, inter alia, VGTV and his son Anders Torp that I've written and spoken. This is not mentioned, it would then have been interesting so see how congruent all criticism is welcomed in January Aage Torp? Or truth is not something to worry about? Leave only the lie can live their lives as police want it to be?

9.) Jan Aage Torp and Searchlight have different views on divorce and remarriage alleges Kjell Andersen. Torp believes he is the innocent party and can romp on further in their lives. Here it is revealed two major lies. Firstly, Torp is obviously not the so-called innocent party. And the so-called innocent party aiming not at all to the marriage, but the betrothal period where one can stand. Here the spotlight by Kjell Andersen also a big, big mistake. One does not address the crux sight on remarriage. One does not even try!

10.) That my kids so never publicly come out in any way in this matter. While January Aage Torp's children do exactly the opposite. What does it tell us? I and my wife have not failed parenting role, but Torp has a degree failed. Why will he fight child welfare? It was exactly the man who betrayed the family Torp when he looks so very smooth and nice out!

No, the criticisms that Kjell Andersen comes with witnesses about the lack of love and empathy.
What I, my family and supporters are subjected to is nothing else than Christianity persecution!

Regarding Jan Aage Torp is it so sad chapter that we are talking about a catastrophe which we have never seen such early hour gone for that here is a man who is not only included "pants" down! But is completely stripped and is stripped back with zero credibility and posthumous his is at such a low level that it can not get well mostly lower ?!

Torp's really been revealed to all of Norway - but he as the sole are not aware of it. Therefore he attacks both his son and most other well. That he is attacking me now through their poodles and lackeys, it's bad that he had done it himself when he never tried to stop them. But rather has encouraged and defended them! In other words, Torp tier when his "disciples" speak! It cause the same!