No. 1102: Pray that God will show up, and he sends his Angels in Christianity persecution trial in Oslo District Court on 20 January saddle 416 such a connoisseur who is God!

No. 1102:
Pray that God will show up, and he sends his Angels in Christianity persecution trial in Oslo District Court on 20 January saddle 416 such a connoisseur who is God!

Psalm 34. 8 Angel of Jehovah camps around those who fear him, and he delivers them.

A very nice song from Youtube. The solution is always God in any situation for everyone, also in this case. Pray for me and matter, intercession is and remains the very, very important in every situation and on every occasion.

The entire case is based on a fictional review of Jan Aage Torp who hated me and my preaching about remarriage. Then he went to "inquisition" police Manglerud police chamber, which obviously has the same hated to get a final judgment against me. So Torps want to remove me from the Google search engines are "heard"!
So one can in many ways to say that it is Google who is to blame for all this "misery", as well as a hatpoliti and hatApostel. This is in many ways worse than Saudi Arabia and North Korea who do not tolerate opinions that authority dislikes of uncertain causes and reasons. When the countries have never had reel faith and utterance that despite everything we have and have had here in Norway.

Photo of the indictment, although I have deleted several words, is this in the indictment. Admits than anything it's just wrong, admit a non something, then it's wrong. Here there is a police force that is similar to what one finds in North Korea, Saudi Arabia or similar countries. Not much miner that we live in a free democratic country with the Christian preaching in the bottom. 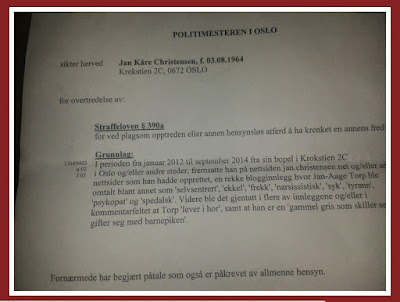 First I take Psalm 34 that I have received regarding the ongoing court case in which the police here in Oslo. On Manglerud stands load tees with fornicator and delude apostle January Aage Torp who have managed to manipulate and fool the police into believing that he has been harassed when he has been doing this myself for thirty years against everything and everyone. And what he has written about me, far exceeds, by far what I've written and spoken about him. And we take with what his "henchmen" and "poodles" has written and spoken, so it 100-1 in favor Torp.

But here the Salmen I've got, and here there is much exciting and good from the Lord.

Psalm 34. 1. By David, when he was behaving himself like crazy for Abimelech, and drove him away, and he went away. 2 I will bless the Lord at all times, his praise shall ever be in my mouth. 3 My soul will boast in the LORD; the meek shall hear, and rejoice. 4 O magnify the LORD with me, and let us exalt his name together! 5 I sought the LORD, and he answered me, and he delivered me from all that troubled me. 6 They looked up to him and beamed with joy, and their faces reddened never shame. 7 This poor man cried, and the Lord heard him, and saved him out of all his troubles. 8 angel of the Lord encamp round about them that fear him, and he delivers them. 9 Taste and see that the Lord is good! Blessed is the man who takes refuge in him. 10 Fear the Lord, ye his saints: For there is no want to them that fear him. 11 The young lions suffer want and hunger, but those who seek the Lord made nothing good. 12 Come, children, listen to me! I will teach you fear of the Lord. 13 Who is the man who wants life, who wants him days to see good? 14 Keep your tongue from evil and your lips from speaking guile! 15 Depart from evil and do good, seek peace and pursue it! 16 The eyes are toward the righteous, and his ears toward their cry. 17 LORD is against evildoers, to cut off the remembrance of the earth. 18 The righteous cry, and the Lord hears, and of all their troubles he delivers them. 19 The Lord is nigh unto them that are of a broken heart, and saveth those who have a broken spirit. 20 Many are the afflictions of the righteous, but the Lord delivers him out of them all. 21 He keepeth all his bones: not one of them is broken. 22 Evil shall slay the wicked: and they that hate the righteous shall be desolate. 23 The Lord redeems soul of his servants, and none of them that trust in him shall be guilty.

I am sure of one thing or several things. And one of the things, the very best that anyone can do for one. It's not how much money and warm words a speaker for one. But that a request for that person. Therefore, I have a big, big wish:

Pray for me and my family during the ongoing persecution of Christianity trial! Here all allowed to write and speak absolutely anything they want about me and my family. No person shall be held accountable for this.
Although what I have written and spoken is 100% right, true and necessary. So should I be and punished! All right! But what is the "solution" ???????????? God is always the solution!

Therefore I wish intercede for me and my family, it is the largest and most important gift and you and you can do. And mention us by name.

It is Berit, Jan Kåre, Sara Caroline, Benedikte Rebekah and Jan Benjamin Christensen. We need your prayers and their like never before.

There is no cheering for us!

From my commentaries Hebrews. 12. 12. 1. When we have so great a cloud of witnesses surrounding us, let us lay aside every weight and the sin that so easily entangles us, and persevere in the race that is set up for us,

This cloud of witness is all that has gone before us and who have stood out during and fight. They cheer us up today so that we will reach the goal; sluttfrelsen.

Then we add the weight, it can be as well not directly pity. And sin will destroy 100% safe for us on the path of faith.

Persevere speaks of the Christian life is more like a marathon race to calculate than a 100m race!

2 looking unto Him who is the author and finisher of Jesus. To get the joy he had in store, he endured the cross, despising the shame, and now he sat at the right hand of the throne of God.

We have read about many heroes of faith but they are all human beings with limitations and defects which all of us. Only that we are constantly in all parts may have as a role model in all things is the Lord Jesus. Jesus endured the suffering aspect of God's life then came exaltation. How is he a role model and example for all of us.

With eyes fixed on Jesus is also keeping in the Christian life, people disappoint and fail. Also a self makes it unfortunately sometimes.

3 Yes Consider him who endured such opposition from sinners, lest you become weary and discouraged.

Think of him says the author. It is healthy and just thinking about Jesus. And we should also let his word dwell among us. We get tired and can get bored. Then we'll let the focus be Christ and not ourselves. Resistance, we must reckon with. And get discouraged too, then the solution to this that all other areas of Christian life.
Jesus and have his eyes and thought circled around him.

1 Cor. 1. 30 You are His works through Christ Jesus, who has become our wisdom from God, our righteousness, sanctification and redemption, 31 that whoever boasts, should boast of the Lord, as it is written.

4 In the struggle against sin you have not yet made such resistance that it came life.

At the beginning of the Christian revival in Jerusalem was the Jesus-believers persecuted (read Acts). Eventually normalized things up and even many priests were obedient to the faith. It was nothing of the external resistor that got someone to back out and empty return to law.

Acts 6. 7 God's word reached increasing numbers, and the number of disciples in Jerusalem increased greatly. Also a plethora of priests were obedient to the faith.
(end of quote).

Imagine, it's like Abraham, Isaac, Jacob, Joseph, Moses, David, Isaiah, Jeremiah, Ezekiel, Daniel, Esther, Ruth, Deborah and everyone else cries out to me: "Jan Kåre, stand on, we have gone through the same ! And overcome everything! We are cheering for you, you are also a winner over! "

God's promise to us is to remain standing after having overcome everything, but we live in a match. Therefore it is so concerned to get dressed armor of God. It is only in this way we can remain standing after having overcome everything! But that's not to say that we seemingly lose some games, if we see it purely human. But in God's perspective, so we win, as long as we remain faithful. Believe God's word and not lose Christ testimony.

Final Comment:
We humans may have different opinions. But something I want and believe will happen. Not least when believers pray. It is that God himself will met in Oslo District Court on 20 January. And to do that and are all flesh quiet. This is such an important issue. Whether it should be allowed to preach whole counsel of God for salvation, and it is unpleasant. Not least for divorce and remarriage. It is about this fight standing.

I need and want the believers intercede for me and this case. That's the best you who believe in God and the name of Jesus can and will do!

I will take to finish my commentaries from Ephesians also Apostle Paul that when put in prison when he wrote this letter. Also more than anything else wanted the faithful prayers, something better than what's there.

From my commentaries Ephesians 6 18 Do this in prayer, and put it all to God! Pray at all times in the Spirit! Watch and keep praying for all the saints;

Taking on the whole armor of God and fight the spiritual battle can be a struggle and hard work. But Jesus has called us to a sofa toilers, but to work in his vineyard, as members of his body, as volunteer helpers and active Christians in the congregation and church. Much has the character of work. So it is with prayer. It is not intended that the prayer should be a pastime only when you have nothing to do. It pays to make time for prayer, but prayer is also resting. Jesus says to his weary soldiers for the gospel and the cause of peace: "Come unto me, all ye that labor and are heavy laden, and I will give you rest." Matt.11,28.

19 also for me. Pray that the right words must be given to me when I speak, so I can boldly proclaim the mystery of the gospel,

Paul wanted to preach in a right way the gospel secrets. Here lies a lot. To name a few truths here it is Jesus' death on Calvary defeated Satan. But this is only a beginning for all the mysteries of God.

20 which I am an ambassador for here in prison. Pray that the gospel must have courage to speak as I should.

Now he sat in prison, this was part of God's plan. When he fik time and opportunity to write the letters we have from his hand today. Without his "break" had we not had enough all the good letters. The fact that God allows things to happen, even the negative is usually a part of his large and significant plan and purpose.