No. 1074: Hatkrim group at Manglerud puts the rule of law, democracy and Norway as a free democratic nation in the discredit ?!

No. 1074:
Hatkrim group at Manglerud puts the rule of law, democracy and Norway as a free democratic nation in the discredit ?!

North Korean leader and dictator Kim Jong-un, as I get associations with Manglerud police.
The so-called hatkrimgruppa on Manglerud / Oslo his police work as they work with their undemocratic and dangerous procedure where they will gag and of bushes, religion and freedom of speech here in Norway? Is it proven or unproven? I do not know, but their method is the unfortunate and poor cultivar! 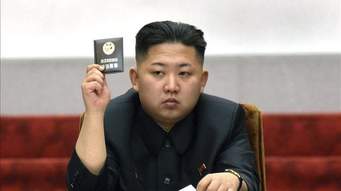 I believe that Norway and its citizens in the process of losing parts of their liberty through such a work in progress today with a widespread almost persecution of "ordinary" citizens under the umbrella of the so-called hate crime. This is something that also becomes especially bad where Norway is over fulfilled by people who come from countries where a killing almost another utterly!
But a wry words here in Norway, and presto, one is criminal and should be punished. This is in my opinion the complete absurdity of the world. On one side are those who kill each other never asked for any right for their misdeeds, while here in Norway, some crooked words, let one of pers. The police are allowed to hold on to? Then we will even up is not a Norway as we know Norway, but ala North Korea.
Let me take an example. See here for discussion:
There was a man who ran his own blog so I understand it. He wrote in my view totally weird and meaningless posts and views about Israel and Africans. Then he was the police, and let down her blog at once, and did penance. But what do the police? They get a trial of it all which he did not show up. He is convicted, he did not show up as promised, and admitted guilt if I think that he had done nothing punishable head. What do the police? They use such judgments against others who do not bow down to them, and they succeed!
Do not than that with such manipulation as we approach North Korea slowly but surely? Finally, one can not mean anything, just bending obediently under the authority and is a number in the order without the possibility of being able to speak freely and straight forward!
If one encourages violence, or defending violence, it is a criminal offense. But what about all the Muslims I have to ask me? The entire religion has been barbaric, and is barbaric and wars since Muhammad started this Sword religion in 600 century after Christ.
But here's the "normal" Norwegian who has such thoughts, views and attitudes as far away from him as possible, they should be punished and removed by police and prosecutors here in Norway. What society do we? Ala North Korea, if not worse when North Korea after all is now so "frozen to death" by people who obviously longs for freedom, love and democracy. While we here in Norway live so unloving and overriding each other, how will this end?
It must then be allowed to think and argue views that others are offended by, and feel offended and provoked? As I see it, it's always, and really the one who provoked and offended parties who have the biggest problem.
Police "shit" in your heart really anyway, that's my experience.
Police come mostly with large and nice words, but their arrogance and laziness is so intense, overwhelming and great that they really can not be bothered or want to work for you. They work for themselves, to break the troublesome elements in society (those who are troublesome for them). And these they put every effort to crack, get convicted and incised out!
In my case, the police have promised me a lot but have never kept word ever, we can have such a police force that does not even keep their promise?
I have an issue with Jan Aage Torp where he in my opinion and judgment has delivered a fictional review, or it is false accusations at me where I have preached against remarriage sin for believers. He has obviously hated me, what do I do? He meets conflicting advice and offer him everything, that if he will, then we can go through what I have written and possibly change some words. But as the psychopath and false apostle he is, so he rejects blank. Afterwards I had an agreement with the police that the case would be dropped, and they would summon me to a meeting where we would go through a number and expression that they did not consider to be good. This promise they broke, and has now filed suit against me, + much more!
Final Comment:
It's okay that not everything should be tolerated, but in practice it turns out that the more that the authorities intervene in the picture, then it becomes guesswork contrary guesswork.
I perceive my case as meaning that Jan Aage Torp has gone much farther than me verbally to mention me. And it is a fake blog that both have sjålet my identity, they write crap and lies about me and others also surpass Torps way to describe me and others. And that they send emails to people who obviously do not have any of this matter to do. How to keep the police on, I believe that these policemen not head is capable or competent to have such a job when they fail to distinguish the most telemetering things. Eg. matter between me and Torp they have reinforced something really to interfere in. they had dropped the matter right away, how much had not all been spared? And they themselves, seems to be so arrogant and unloving, as unprofessional and small human insight. They should never had with other people to do in such a job when their hatred and unprofessional attitudes and demeanor are so striking and bad! Slowly but surely, so will our freedom powdered, taken from us and redefined as something dangerous that we do not deserve and should have, if we do not wake up now and get removed such police officers who will gag and punish us for no reason!
As in my case with the false apostle and ridicule last Jan Aage Torp.


There are those who think that I have written that Torp is nasty and otherwise, all the people there who choose their own path, and those who say they have to do with God, and conniving in sin, they are really nasty in God's eyes ! If one does not realize this on the basis of the word of God, so misunderstood than anything! Anyway, it's him who is to provoke that has a problem, has to do with God, so ignore than anything that does not hit than the heart. It says about Jesus:


1 Pet. 4. 13 Rejoice the more you share in the sufferings of Christ, so that you also may rejoice when he reveals himself in his glory. 14 Blessed are you when you are mocked for the name of Christ, for the Spirit of God, glory Spirit, rests upon you. 15 Let it not happen that some of you must suffer punishment for murder, theft or other misdeed, or for having meddled in others' affairs. 16 But some suffer because he is a Christian, let him not be ashamed, but glorify God in this name.


It is here that Torp and I split up, I'm being mocked for holding forth the word of God and live like a believer. Torp mocked because he lives to God's word and thus is nasty in the eyes of God and people's eyes!
Related Links: http://the-heavenly-blog.janchristensen.net/2015/11/no-1070-assaying-by-jan-aage-torps.html