No. 1078: How will the Holy Spirit be in heaven and in eternity? Or will the Spirit cease or become an embodied person who, inter alia, Benny Hinn teaches?

No. 1078:
How will the Holy Spirit be in heaven and in eternity? Or will the Spirit cease or become an embodied person who, inter alia, Benny Hinn teaches?

Benny Hinn teaches that the Holy Spirit has the same body shape and everything else as a human. Many others, certainly most the Trinity do not know what they think, believe and what we can expect Shake and will happen when we get home to heaven.

What I was told and preached for me in the Pentecostal movement.

There were a lot of things that when I look back on it. Blue. that today so we had the Holy Spirit. But once we got the glory of the body, when the Spirit was not longer than some of us. Yes, there is so much crazy and wonder I've heard over the years. But scripture says the opposite. We have received the Spirit as a pledge until redemption day, when we will get the Spirit in full measure. And then God will be all in all. Trinity creates and leads to spiritual blindness.

Scripture says that God may be all in all, and then in what way? As of today, by the Spirit. And make Spirit a separate God Person is and remains unbiblical.

1 Cor. 15. 28 but when everything is subject to him, then shall the Son himself subjugate himself to him who put all things under him, that God may be all in all.

Yes, God will be all in all. Believe that the Spirit will ever leave you're an alien thought in the word of God. As believers we have the Spirit here on earth, and the more when we arrived home.

Getting a mortgage is to get something of what one should get a day later only even richer. We have received the Spirit here, when we received salvation. One day we will get the Spirit even richer, the day we get glory body.

Photo of Benny Hinn who believe and teach that the Spirit is a person like us with hands, feet and everything else. Yes, yes, much spray one should hear before realize that Trinity is a fictitious and invented doctrine.
Notice the gesture, which he shows devil sign, which again shows that the Trinity is not from God but from God's adversary the Devil. 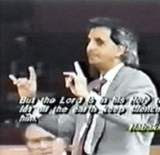 Arne Jordly their translation of 2 Corinthians. 1 22 And it is also he who has put his seal upon us and given us the spirit that in our hearts.
Reason The text reads: Where is he who has given you a foretaste in our hearts by the Spirit that God has given us.

In other words, we have the Spirit now, but it is a foretaste of what is to come when we will get "the whole package" when we get glory body, seeing Jesus and become like Him.
Most Christians believe to build on the Bible and many are cocksure that the Bible is God's word.

But in the case of dogma of the Trinity, they follow selsamme Christians NOT bible. As shown in this thread, so reviewing Jesus God as their father.

This is really a very clear statement, which implies that Jesus certainly can not be the same as God. Who refers to himself as "father"?

It is obvious from the Bible that God and Jesus are two distinct personalities, and the former is the latter's father.

Trinity referred not at all in the Bible. It was first adopted after hard discussions more than 300 years after Jesus lived. Trinity is quite obviously a human invention, and are not taught by Jesus.

Jesus says, indeed, in the Bible that he is given all authority in heaven and on earth, but it is not something unusual that a son has been given over the management of his father.

The Bible is referred to as "the holy spirit" is a fairly common way to use the term "spirit" in the past. "Spirit" was synonymous with consciousness or thought. "The Holy Ghost" should therefore be understood as "God's holy mind"!

Most Christians claim to be based on the Bible, arguing that the Bible is God's word, but in the case of the Trinity dogma, they build NOT the Bible, but the man-made thoughts.

The Trinity is not at all mentioned in the Bible!

The Christian doctrine of the Trinity has only thing about Holy Spirit represents the female and mother. The doctrine is based on the universe's two major principles. The masculine, feminine and offspring (child) it in everything; Positive and negative terminals providing light ...

Trinity concept leads us right back ancient Egypt, and is initially not a Christian thing. This was Christian admonition by the Synod of 325. The Egyptians had the divine Osiris, Isis, and Horus as the divine Father, mother and son.

Another oldegyptisk perception of the Trinity is described as such; Our universe consists of;

This tripartite division is transferred;

man Osiris and spirit,
Isis as the woman and the soul,
and Horus as the son, or the child of man, the fruit of the two.

Trinities in different forms are known from several religions, including Greek and Roman religion. Non-Trinitarian Christians have often pointed this out, arguing that the Trinity is the result of an adaptation of Christianity to the pagan doctrine. The early trinities usually consists of three gods as grouped together, and which were related to each other so closely that they were revered as a unit.

Plutarch says about trinity symbol that tripartite square one: the Father, the firdelte 2: is the Mother and the quintuple is 3: Son

Trinity is also a term that the Celts possessed long before the arrival of Christianity in Ireland. A three-blade white clover was the Irish Druidic sacred plant just because the leaves formed a trinity. The number three was sacred in the Celtic religion just as in many other religions. In Celtic religion, we also find a family consisting of God the Father, God the mother, and the Divine Son.

In Iran, we find the Persian triad. Where Mitra is Mother God. Modern Hinduism has a trinity, Trimurti. With Arani as Mother Goddess. (Source Trinity term)

Here are some article of the Trinity and with links that you can tap in the headline.

If God is Christ?

We are directly built on the most central question of the Trinity. Some say that when Mary of Magdala and the other women after the resurrection of Jesus fell down at his feet (and worshiped him), (MAT 28:9. See also Luke 24:52) Christ proves that he is God Almighty, since he not rejected her worship, for the Scripture says: 'The Lord your God shall you worship and him alone shall you serve.' (Luke 4:8 after quote from 5MO 6:13) This is the same reason the argument that Catholics use in their exaltation of the Virgin Mary, namely: God, Christ and Mary is the mother of Christ. Thus, the Virgin Mary is also Mother of God! See ROM 1:25 and 2:9 2TE.

How can one God be three persons at the same time?

When I write that I do not believe in this Greek philosophy, it is the result of a thorough review of the whole subject. (I take it for granted that you are familiar with the Kon-kordiebokens representation of the trinity philosophy.) Therefore, I would also like to respond to the allegations that letter of the Trinity by Finn Mykle-bust set up. The author Find Myklebust's claims are highlighted.

Section 1
It is not given anyone to understand or explain God.

Agree! The only thing we have to deal with in this respect is the Bible, God's word. Where explains God himself who he is. He said: 'Hear O Israel, the Lord your God! Lord is one! (The superb!) 'This is the greatest commandment! (Mark 12:29) This refers to God's clear voice of Moses in the 5th Moses 6:4. 'Hear O Israel, the Lord your God is one Lord.' See also James 2:19.
http://the-heavenly-blog.janchristensen.net/2012/01/nr-219-how-can-one-god-be-three-persons.html

God's name and I am

The Norwegian Bible's translation of 1988 is a footnote * to the expression 'I am who I am,' with the following explanation:
* Heb. YHWH

The NOK will surprise many is that both the above footnote and translation of 2MO 3:14 in most Bibles actually directly wrong. Rendered literally from the Hebrew reads verse 14 this way: Then God said to Moses, 'I want to be that I will be.' And he said, 'Thus you shall say to the Israelites:' I will 'has sent me to you.' The actual Hebrew word in the verse is AHJH (pronounced: ehjæh), ie 1 people. singular form of the verb to be. The same word is found in verse 12 (which strangely NOK are translated directly in the bibles that otherwise renders verse 14 wrong): And he said: 'Verily, I will be with you -'

The Hebrew word God uses for himself in 2MO 3:14 in other words, AHJH and not YHWH. The meaning of the name of God, YHWH, you know, according to Hebrew-literate theologians do not know what means, only that it is an expression of The Absolutely Existing, He-who-is-in-eternity.

2MO 3:14 expresses thus: God said to Moses, 'I want to be.' (Uderfor-stood: with you in this trial) that I will be. '(The implication: with you in all other trials).