No. 1079: Sorry, I do not take responsibility for that you will believe in the Trinity, even though it is 100% unbiblical and contrary to the word of God in both the Old and New Testament!

No. 1079:
Sorry, I do not take responsibility for that you will believe in the Trinity, even though it is 100% unbiblical and contrary to the word of God in both the Old and New Testament!

Image of God as male, but that's not what it's all about. But that God himself presents itself like this, not like the female. Do you for example. why a woman should cover up and not a man? Then one also easily reject the Trinity is my opinion, look here if covered:
http://the-heavenly-blog.janchristensen.net/2015/08/no-1007-to-wear-jewish-kippa-is-totally.html
http://the-heavenly-blog.janchristensen.net/2011/09/nr-58-covered.html 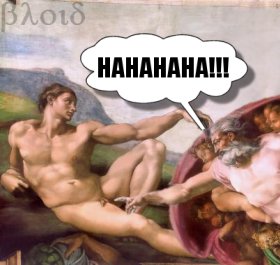 I get a lot of feedback that is that God's church has learned about a triad God 16-1700 years, therefore we must consider this for a biblical doctrine, tradition is not wrong.
Or this that it is more than 99% of Christendom who believe in a TriadeGud etc.

But I take no responsibility for any of this, I want to know what God himself says about this subject and all other subjects of God's word, the Bible, just there!

Tertullian said was the first "learned" that God is triune, but studying than his life. So it looks like he walked away from this teaching, and became an avid believer for completely different aspects of God's word trinatarius doctrine. This tells me something very substantial, putting than themselves into the so-called Trinity. Looks humbug with this unscriptural doctrine, so will reject it and let God's word get guide and govern us.

Jesus says: Joh. e. 14 16 I will ask the Father, and he shall give you another Comforter, that he may be with you forever.
16. 13 but when he, the Spirit of truth, comes, He will guide you into all the truth; for he shall not speak of himself, but what he hears, he will speak, and the things to come, he will tell you.

These and similar verses using the Trinity for all it is worth explaining that it exists and is a triune God. From Church Father Tertullian says, "One being, three persons." The idea is that God is one in his "creature", but exists in three "persons".

When the word he, which is personal pronoun so it is something we will find out who can "little" grammar that is how it must be for that setting will give meaning and containing. And that personal pronouns, we also discussed whenever it comes to our Spirit and Satan Spirit. And Spirit in scripture is always referred to as a male person, and this with small and great character is also something that is not relevant when the Bible in its original version is written only in lowercase, no uppercase. This is also made in retrospect, therefore, really the foundation of the whole Trinity as a mind game or an adventure.

Let me take some examples from Scripture where the word Spirit is bår featured as he gender, personal pronouns and there is no difference if it is the Spirit of God, Our or Antichrist Spirit as it is discussed. But always there is no proper name that tells us that the Spirit in Scripture not go in person, but attributes, thought and power / action!

Room. 8. 16 The Spirit himself testifies with our spirit that we are children of God;

Note that here testifies the Holy Spirit and Our Spirit just as strongly, referred to in the same way and there is no difference. Both testify to the same. Is our Spirit a separate person or spirit of God not it? Or, or, or?
COURSE HAS THIS GRAM TIC MAKING, AND THUS SO CAN WE TURN FAST likewise LITE TO OUR SPIRIT IS A SOLE PERSON IS GOD'S SPIRIT IT. IF ANY CLAIM ANY OTHER, SO I AM AN EXTRA PERSON BECAUSE I HAVE A SPIRIT THAT WITNESSES THAT GOD'S SPIRIT. WHOLE Trinity is and remains a confusing and unbiblical teachings!

Here it is again, that Satan's Spirit is at work in the unsaved life just like God's Spirit working in me who are saved. In other words, those who live and walk in darkness also experience Ghost Effects, but there is an additional satanic person? No, it is Satan himself by his Spirit that works. Just as God's Spirit works in us who are believers. But there is an additional Gude Person? No, no and again no for an answer, it is God himself who acts and operates!

1 Jn. 4. 3 and every spirit that does not confess Jesus is not of God; and this is that spirit of antichrist, which you heard is coming, and it is already in the world.

Here is Satan's Spirit discussed just like the Holy Spirit is spoken. As a hanperson acting in Satan's place. How does the Holy Spirit, but then in the place of God. Do not know how it is possible for my documentation asserting that the Holy Spirit is a person, then one must be very, very proud and sausa into heresy and I do not know what?

Both Satan Spirit and the Spirit of God are discussed sometimes as several Spirits, are we talking about several people or is God one sevenfold nine fold or trinity? All this is totally absurd and totally meaningless, as the Trinity is.

Examples: Joh. Obvious. 3. 1. And to the angel of the church in Sardis write: These things saith he that hath the seven spirits of God and the seven stars: I know thy works, that thou hast a name that you live, and you're dead.

Notice the seven Spirits of God, we are talking about Seven Sacred Spirits? Should one follow the train of thought of those who believe in the Trinity as it is exactly like that, but I think there are seven characteristics or seven pages it is snak about.

This is from what I have written as commentaries on this verse:
3. 1. To the angel of the church in Sardis:

This says he who has the seven spirits of God and the seven stars: I know your deeds. In the name you are alive, but you are dead.
Sardis, also Sardes, the capital of the ancient kingdom of Lydia, the seat of a konventus under the Roman Empire, and the metropolis ice to the province Lydia in later Roman and Byzantine times, and was lying in the middle Hermus valley, at the foot of the mountain Tmolus, a steep and tall spire with the shape of a citadel. The earliest references to Sardis are Persians by Aeschylus (472 BC). From Wikipedia.
Now there are those who get caught in the seven Spirits of God and the seven stars. What is it? Actually the Holy Spirit and the opportunity to hear and be among the victorious are equal for every church that has heard the message of Jesus. The seven stars may also view that there are epochs of the church there any era, some biblical truths that moment is more appropriate a second about everything God's word is given to everyone.
Matt. 24. 45 Who is a faithful and wise servant, one whom his master has entrusted the supervision of the other servants, so he will give them food in due season? 46 It is the servant whom his master will find so with this when he comes back. Happy is he!
Ecclesiastes or Sanity's mission is to provide the right foods at the right time. The opposite of this is found in 2 Tim. 4. 3 For the time will come when people will not endure sound doctrine; but as they see fit, they take themselves teachers, for they will have that itch in your ear. 4 They will turn their ears from the truth and stick to myths.

Here about Satan Spirit: Joh. Obvious. 16. 13 And I saw the dragon mouth and the animal's mouth and of the false prophet's mouth came out three unclean spirits like frogs;

What is meant by this? There are three additional Spirits or? Of course it is not the case. This is from my commentaries on this verse:
Now frogs afoot. We know what frogs do, they croak to each other. And just what makes the different nations. They will all remove Israel once and for all and be allowed to believe, think and live as one wants.
There are those who use this word to get it to be a satanic trinity therefore there is a Divine Trinity.
To lie one for themselves and others.
Here tales about a Satanic quartets.
1.) The dragon is Satan
2.) The beast is the Antichrist
3.) the False Prophet as pope in Rome typifies
4.) The frogs are an image of the Satanic and Anti Christian spirit that is at work even today!
Hope you do not build the Trinity on an Sataniskkvartet but it is possible that it is he who is behind the Trinity which is an ancient Egyptian and Hellenistic teachings.
Here comes really Trinity in from:
The universal goddess.
The sovereignty of the universal goddess of the Hellenistic World can not just illustrated by the Greek Demeter and the Egyptian Isis, but also by Thurs the 2nd goddesses; the Syrian goddess atargatis and the Phrygian goddess Cybele.
Atargatis identified grekarane mostly with Zeus say consort Hera, but she lasted attributed traits from other goddesses too, as td Athena, Aphrodite, Artemis.
Cybele lasted identified by grekarane with god-mother Rea and with Demeter, but as a goddess in the close Austen lasted ho most associated with atargatis.
These goddesses visar how important feminisation Inga in pantheon was in Hellenism (according to Luther H. Martin), both as universal mother goddesses and goddesses for those many women who participated in many different mysteries and cults. This feminization should interactively comet to change.
To believe in the Catholic doctrine of the Trinity which unfortunately most Protestant churches and congregations have adopted is avgudsdyrkeri and violations against God's word.

Final Comment:
The word Spirit and that it is in males have the grammar to do, and that God himself presents himself as a male, always. And when Adam was created in God's image, so there was a man, so the woman no. 2, and subordinate to man, then man is "original version". Now it is not to describe the relationship between man and woman this article is written, therefore I post a comment no more on this subject. But that the Holy Spirit is part of God, but not a separate Gude Person.