No. 1080: Great Commission to baptize in three denominations, or titles turn completely "legs" during the believing a Trinity-God!

No. 1080:
Great Commission to baptize in three denominations, or titles turn completely "legs" during the believing a Trinity-God!

Father is a title or designation, the son is a term, and the Holy Ghost is a title or designation. But it is Jesus who is named as it was commanded to baptize in. We read not in Mark 4:16 p.m. that whoever believes and is baptized shall be saved? Yes, certainly we do it. And we find in Acts 4:12 that there is no other name under heaven given among men by which we must be saved, than the name of Jesus. Thus we read also that at each of those cases where baptisms mentioned in Acts, then the baptism performed in the name of Jesus, not for three titles.
These names are not in the majority, but singular. That makes it clear that it refers to the name of Jesus!

Picture baptism, we shall follow the first Christians, so we baptize in the name of Jesus, not in three denominations or three titles. 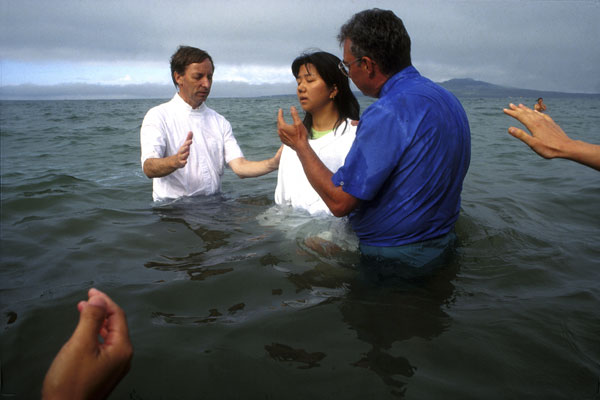 Matt. 28. 18 And Jesus came and spake unto them, saying unto me is given all authority in heaven and on earth; 19 Go therefore and make disciples of all nations, baptizing them in the name of the Father and of the Son and of the Holy Spirit, 20 and teaching them to obey everything I have commanded you. And surely I am with you until the end!

Arne Jordly his translation that matches the original text: Go ye therefore, and teach all nations. Baptizing them in the Father, the Son and the Holy Spirit, and teaching them to obey everything I have commanded you.

It is absurd to baptize some in three denominations or three titles, but in the name of God operates in, it baptized the first Christians. They followed "not" Jesus orders as some see it, then they baptized people in Jesus' name. But that is not the case, they realized that it was in the name of Jesus as they were baptized, for that was the name.

Here are the examples in Scripture that is rendered as the early Christians baptized:

Ap.gj.2.38. Peter replied, "Repent and be baptized in the name of Jesus Christ, each one of you, that you may receive forgiveness of sins, and ye shall receive the Holy Ghost.

Ap.gj.10. 48.Så he commanded that they should be baptized in the name of Jesus Christ. Then they asked him to remain for some days.

Ap.gj.19.5. Having heard this, they were baptized in the name of the Lord.

That the early Christians and that baptism comes first after one has come to believe finds a clear out of when one goes to our source; God's word.

It says in Mark 16.16 Whoever believes and is baptized will be saved. But he that believeth not shall be damned.

We are baptized into Christ. It is the main essence of baptism. That the way Jesus walked symbolizes we to be baptized. When we are baptized in a somewhat confused manner. So we have not lost the most important thing; To be baptized into Christ. His death, burial and resurrection. Rom.6.4. We were therefore buried with him through baptism into death: that like as Christ was raised from the dead by the glory of the Father, so we also should walk in newness of life. 5 For if we have been planted together in the likeness of his death, we shall be also in the likeness of his resurrection.

The fact that we in baptism symbolizes that we go into the same life as Jesus. To live in seclusion for the world and live for God. What I did with full conviction when I was baptized 17 years old. The baptism have had a decisive impact, although the words that were meek over me was not 100% in agreement with God's word. I was baptized by immersion to fill Christ in faders, the Son and the Holy Spirit.
Notice that I was baptized into Christ. That is the essence.


Gal.3.27. as many as have been baptized into Christ have put on Christ.

That's as far as I can see it. To the early Christians did it and that we should practice it!

The Son, the Father or the Holy Spirit some its name? No, certainly not.

God's name is from Wikipedia: Yahweh (Hebrew יהוה) or Jehovah is God's name in the Old Testament (Jewish Tanak), and mentioned 6828 times there. Since Persian time has evidence that Jews avoided pronouncing this name, but said adonay "Lord", elohim "God" or just Hashem, "name" when they came to this own name, because it was thought that the name was so holy and so dangerous that this should be avoided. Consequently, the pronunciation of the name is lost in the Middle Ages.

The Hebrew יהוה has in some cases been transcribed as "Yahweh", the second as "Jahwa" or "Yahwe (h)." These different varieties because there is no consensus about which Latin vowels that should replace Hebrew י (iodine / yod) and ו (vav / waw) in either German, English or Israeli literature, nor in Nordic. Under Norwegian rules for phonology it otherwise most natural to use consonants YHWH.

Final Comment:
Now I have through this article and other powerful evidence that the early Christians baptized only not three titles or three denominations, even though Jesus said in Matthew 28, but in his own name. And the justification for this is also given, but what about omdåp?
For it is I accepted unless one is baptized into Christ, although he "hung" on three titles that are not right and biblical. But one baptizes himself again, so I believe that it's okay as long as one does not mean that others must do the same!
I DO NOT RECOMMEND OMDÅP BUT I RECOMMEND baptism by immersion in Jesus' name. AND ON THE WAY BECOMING AN united in A BODY LIKE HIS AND IN A RESURRECTION, EVEN HIS!