No. 1081: Eagles of Death Metal, who hails Satan and the band that played during the slaughter in Paris will return to play and spread even more dead ?!

No. 1081:
Eagles of Death Metal, who hails Satan and the band that played during the slaughter in Paris will return to play and spread even more dead ?!

Image of "death band" Eagles of Death Metal in Lego bricks, which actually openly wish the evil welcome and will be united with him. Letting lick obviously occult groups and afterwards mourn death seems like an oxymoron. I can not understand that we could allow such groups to act and sing, and believe that there will always go well. 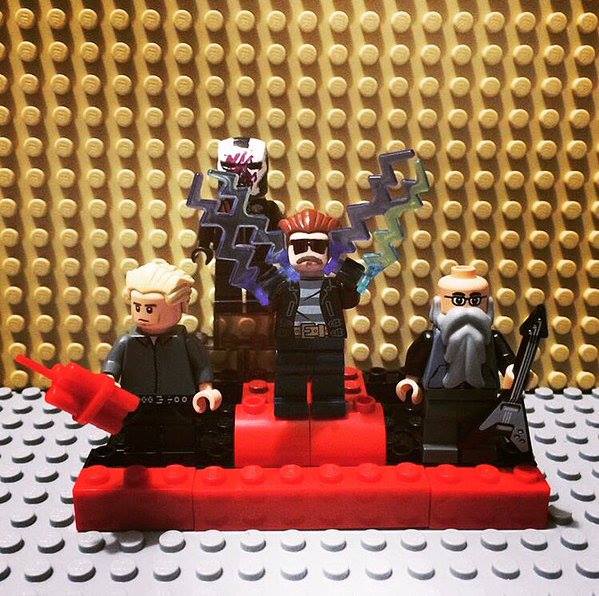 Isaiah 24 1. Behold, the Lord maketh the earth empty and maketh it waste; He changes its shape and scatter them that dwell therein. 3 Emptied, yes emptied will the earth and plundered, yea plundered; for the Lord has spoken this word. 4 The earth mourneth and languisheth; earth languishes and withers away; the chief of those who live on earth do languish. 5 The earth is defiled under the inhabitants thereof; for they have violated the laws, violated the commandment, broken the everlasting covenant. 6 Therefore a curse devours the earth, and they that dwell therein are desolate: therefore burning earthlings, and there are few men left. 20 The earth shall stagger like the drowning and swung to and fro like a hengekøi and its iniquity will roll on it, and it shall fall and not rise anymore. 21 In that day the Lord will punish the army on high and the kings of the earth beneath; 22 and they shall be gathered together as prisoners in the dungeon, and shall be shut in the prison, and after many days shall they be punished. 23 And the moon shall blush, and the sun ashamed; for the Lord of hosts is King in mount Zion and in Jerusalem, and his elders, is the glory.

I have in an earlier article written about "death band" Eagles of Death Metal which hailed Satan and sang so actually when these Isil terrorists started shooting, they had sung about this beforehand. They had been "answered prayer" how bad and perverted it may sound like. It happened at Le Bataclan, in which 89 people were killed. Oh would have this "death band" again, is like saying that we would reprise. Fortunately, as I understand it, they will not return with the first, and well there.

But have we learned? We in the Western world must also repent, or they will obviously worse things than what happened in Paris happen again here in Europe.

A call to repentance is here now!

I think of this page Nineveh, who received God's warning, and repented. At the same can and will happen here in Oslo, Norway and Europe? It had been wonderful, and the possibility exists more than we realize?
Now the world has seen what Satan is able to do through these various Muslim factions Isil, Al Shabaab, Boko Haram and others. Then one must know and understand, that it exists and is a different and much better option, it is faith in the Lord Jesus Christ, there is the promise of this life and the next!

How to get to God? It is through Jesus Christ, by faith in Him and put your bit to his vicarious death and resurrection for you on the cross of Calvary.

From my preliminary commentaries Gospel of John 1 11 He came unto his own, but his own received him not.

We have two options to react. The first is to reject, as most did and still does. This negative possibility mentioned first.
Actually, the incomprehensible, for Jesus came into the world that he helped to create (ref. V3). Therefore, the world v11 called for their own "and the people who live there for his own." To reject Jesus is thus rejecting his own creator and brother.

12 But as many as received Him, to them He gave the right to become children of God - those who believe in His name.

The Word says that he gave them the right to become children of God. That all who accepted Jesus he gave authority to become children of God. Accepting Jesus is the same as believing in his name. In the term "name" is that Jesus is anointed by God to be the Savior of the world. In the Old Covenant was king, prophet and priest (chief priest) anointed. Therefore we speak about Jesus tripartite task. He is king, prophet, and high priest. He is king of the universe. He is a prophet who preaches the word of God, and he is the high priest who wears himself to God as a vicarious sacrifice. Jesus Christ took all the sins of the world on up on the cross and took the punishment on himself and died as a sinner and felon and was buried. Death could not, however, hold onto him for his death, he died to sin, but his life, he lives for God. Therefore, he stood up for our justification. Scripture says, "Him who knew no sin God made sin for us, so that in him we might become the righteousness of God" 2 Corinthians 5:21.

Therefore, whoever takes refuge in Jesus and go to him with their sins and failures and believes in him justified and is a child of God. He is born of God, that he is reborn by the Spirit of God.

13 They are not born of flesh and blood, nor of human decision or a husband's will, but of God.

By the new birth gets the penitent sinner saving faith and a new heart and a new setting. It is a miracle of God's grace is happening in the individual's heart when God's word first gets to show the sinner's true standing before a holy God and opposition to God ceases and the gospel will make his merciful deed.

Bring some passages from the Word of God that tells us the way of salvation, the way to achieve contact with God by invoking the name of Jesus.

Room. 10. 13 For whosoever shall call upon the name of the Lord shall be saved.

Ap. Gj. 4. 10 be it known to you all, and to all the people of Israel, that of Jesus Christ of Nazareth, whom ye crucified, whom God raised from the dead, by him this is healed before their eyes. 11 He is the stone which was rejected by you the builders, which has become the cornerstone. 12 And there is salvation in no other; for there is neither any other name under heaven given among men, whereby we must be saved.

Joh. e. 14 5 Thomas saith unto him, Lord, we know not whither thou goest; how can we know the way? 6 Jesus saith unto him, I am the way and the truth and the life; no one comes to the Father but by me.

2 Cor. 5. 17 Therefore, if any man be in Christ, he is a new creation; old things have passed away; behold, all things have become new! 18 But all things are of God, who reconciled us to himself through Christ and gave us the ministry of reconciliation, 19 that God was in Christ, reconciling the world unto himself, not imputing their trespasses to them, and has committed to us the word of reconciliation. 20 Now then we are ambassadors for Christ, as though God did beseech you by us; we pray you in Christ's stead, be ye reconciled to God! 21 Him who knew no sin he made sin for us, that in Him we might become the righteousness of God.

Room. 10. 6 But the righteousness of faith says: Do not say in thine heart, Who shall ascend into heaven - that is, to bring Christ down -? 7 Or, Who shall descend into the abyss - that is, to bring Christ up from the dead -? 8 But what saith it? The word is near you, in your mouth and in your heart; it is the word of faith, which we preach, 9 that if you confess with your mouth that Jesus is Lord and believe in your heart that God raised him from the dead, thou shalt be saved; 10 For with the heart one believes unto righteousness, and with the mouth confession is made unto salvation.