No. 935: Own experiences of blog Searchlight v / Kjell Andersen


No. 935:
Own experiences of blog Searchlight v / Kjell Andersen

Image of "Pastor" Jan Aage Torp who have written you endless comments on Searchlight, but as it nettrollet he is, that's about all erased by what he has written. 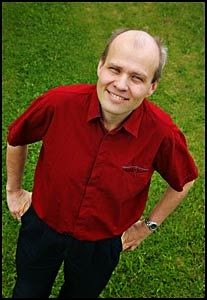 It was only in April 2014 I learned of this blog, and saw this as a "Christianized" place, where one could discuss in a proper way with adults and not least ... that Christians were real people!

They immediately went to "throat" at me when I did not agree in their views on this being a public preacher and breaking one or more marriage AFTER salvation.

In such cases, should the public preacher / leader three down from the pulpit simply. But it is in fact not what is happening today .... no, today continues them as if nothing has happened and think God blesses it ??

Instead, he shows them either church and sheep that it's okay to stand AFTER salvation .... whether it was

adultery in the picture or not. Just that those would have a new spouse simply .... I am totally disgusted.

This is now becoming full acceptance of the "all" Christian community, it looks like today. All this adulation ... "jaja, it is enough good finally, good luck with the new spouse" ..... Social media abound this! Very few speak up.

Christians in Norway not being persecuted, is a lie! Several Christians have been threatened into silence and been told that if they speak then this slander!

On the blog Searchlight released all comments through and some have been so rough and ugly that I been sitting gape.

- But I've fortunately copies of all them have written in our surname, I have certainly come forward with my full name as opposed to several others that are only "tough" behind the keyboard.

But enough is enough ... I have now said the basis of the blog Searchlight that mentioned our names out more then those who do become reviewed. We are individuals, not public figures. The public has to obviously done on it to withstand more, but there are real limits!

Jan Kåre and his wife have just stood by the whole word of God, it has really cost them! It is obvious that they are being persecuted for their faith! and yes, we have experienced the same. It'd be like when one wants to live a pure and holy life. Few Christians like it ... and for several decades has been preaching so that everything is grace and forgiveness .... consequences are never mentioned.

I have no notion who some of Searchlight is, I've never talked to them, never met them, they know not at who we are.

Today I see more of this persecution of those who stand firm on the Word! And it happens in Norway!

The rewritten writ Jan Kåre received by police .... but it was someone else entirely that should have had !! This is completely turned upside down.

On Searchlight saw was the roughest and ugliest writing against us by Torodd Fuglesteg, where Kjell Andersen followed eagerly. It was attracted taken care of before them delete it as usual. I have a whole stack of copies of Searchlight where I and my husband being hung out on the ugliest!

I refuse to find in this more and let me be subdued and threatened into silence and will report those coming with more shit in there about us.

Lying Stories and assumptions from one end to another and they jetted each other up !! It is absolutely crazy to see ..... not because I'm there, but because I know of several who are now supplied and take copies as evidence before they are deleted.

Now it is appropriate that Searchlight and Kjell Andersen apologize for his handling of the website he is the responsible terms.

The only attention Searchlight get is when writing about Jan Kåre Christensen, then watch network trolla to !!

That's when the site gets attention, otherwise it is to be depressed!

They have no "taking" other Christians on as they create their own stories and lies! Not so easy to look with a magnifying glass when the conscience of those concerned are clean.

Oh to have a clean conscience in all things just do that we can pick ourselves !! People who know us know it's a lie nonetheless.

I would strongly warn you that are in Searchlight and either comment or eavesdroppers in the wings .... stay clear .... you play with things you should and most likely will have greater consequences than you realize. It costs all people to be stepping error, then there will be some extra laps around the mountain, you do not come on with God. It just.

Come ye fast as under grace and not under God's wrath.