No. 1076: Will we meet a "third" Deity Person, the Holy Spirit ever - in heaven or on earth? If not is not the Trinity Reel!

No. 1076:
Will we meet a "third" Deity Person, the Holy Spirit ever - in heaven or on earth? If not is not the Trinity Reel!

Imagine we are all going to heaven, and look both Jesus and God the Father, but where is the Holy Spirit? What will Jesus and God do? I think the solution is very easy, easier than most people think ?!
Imagine we have been one week in the sky, and there are several "church members" who have asked WHERE IS THE HOLY SPIRIT? They have talked with the pastor about this, who taught that there are three persons in one Godhead common. We have seen God the Father and Jesus, but where is the spirit?
It is clear on quince common collection so there will always be opportunities to ask if it concerns the individual. So get God the Father and Jesus the question, which one turned to come, "WHERE IS THE HOLY GHOST ??????????????»
Jesus, angels, God the Father and some like me who do not believe in a trinity doctrine, and the lion's share of all the saved Israelites who are in Heaven chuckling slightly. So take Jesus answered and ask them what name have when the Holy Spirit? A person with no name's not a person? So it becomes very, very quiet, now what?
So does Jesus something ingenious and simple, call forward Jan Kåre Christensen as easily on foot takes the stage. So Jesus says: "YOU have not listened to my servant Jan Kåre? He gave I light of this and so many other things from the Bible? "
So it becomes very many who blushes and feel shame. But then there is a rude person who has entered here. His name is supposedly Birgir and scolds:
"This is heresy as this false teacher presents!"
So Jesus says: Matt. 22. 11 when the king came in to look at those who sat at the table, he saw there a man which had not on a wedding garment. 12 And he said unto him, Friend how did you come in here not having a wedding garment? But he was silent. 13 Then the king said to the servants, Bind him hand and foot, and throw him into the outer darkness! There shall be weeping and gnashing of teeth.
There, he along with a lot of things that have learned other mass heresy which ia that God is triune and remarriage are allowed for believers etc.
Jesus says now you have after meeting go to Smyrna Oslo's homepage, where you will find a solid and thorough education on this topic. And suddenly the whole assembly changes, now they shout Hosanna to me! And Jesus follows unwell, then man is not changed. One day it's curse, the next time it's Hosanna. They have not been able to be trained by me? They have relied more on Pastors and traditions than my words.
Of course this is a hypothetical situation. But I think there's something in it. We will not face any holy spirit when we get to heaven, there's probably not a holy spirit as a person now either. I'm glad for my part that God has shown me that the Holy Spirit is not a separate person as God the Father and Jesus, but the Father and the Son, common spirit. So it is both the Antichrist and Satan, they have a common spirit. And we people have a spirit that is the of us, not one extra person. This making a Spirit into a person is completely foreign to Scripture!
Here you can read more about this topic, and there are many more examples of both blog, undervisnigsbloggen and our homepage to Smyrna Oslo.
See here for more on the Trinity:

Is God a Trinity or not? Are there three persons in the Godhead or as scripture says?

God is not three but one, He is the Father. John 17: Now this is eternal life: that they may know you, the only true God, and Jesus Christ, whom you have sent.

We'll try to address the scriptures that speak of God's two agree. We also must try to put us into this purely history. Neither the Jews nor the early Christians had a problem with this doctrine. When the Catholic Church showed up at the 300's the "problems" came, before there were other problems. The Catholic Church also became christening, papacy, church hierarchy, the soul's immortality, indulgences, preachers refuse to marry. Yes, it can also have a distorted view of God and the Godhead. The first Christian preaching in the name of Jesus, baptizing in the name of Jesus and prayed to God in Jesus' name. But the Catholic Church was the confusion of Babel.

2. Joh.b. 4 I have enjoyed myself much because I have found some of your children walking in truth, as we have been commanded by the Father.

Are familiar with Fred Vidar Hjortland who also believe in one God!

There is nothing that pleases me more than that there are believers who live and walk in truth. Hjortland I have learned to recognize as one that it does. Hjortland right here, the others have nothing to do with this article to do 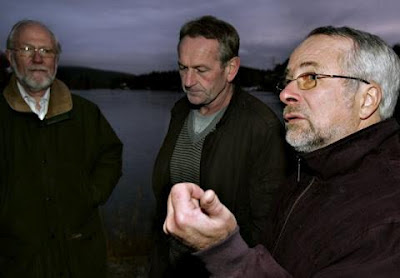 Are familiar with Fred Vidar Hjortland who also believe in one God! There is nothing that pleases me more than to meet believers who live and walk in truth. Hjortland I have learned to recognize as one that it does. Get to know Hjortland here. We have been allowed to put out an interesting book he has written titled "Seven key questions about Jesus and the Trinity."

Here he shows obvious and clear that the Trinity is not found in the four Gospels. Hjortland has previously written a lot in terms of religious movement, laughter revival, the soul's immortality, unquenchable fire, and several other interesting topics. These articles can be found on his website "http://apologeten.no/".

Recommended Reading! I admire those who have the ability to go in depth, holding forth the word of God and be easily understood and clear in its presentation.