No. 1104: Baptism three titles or three denominations makes no sense. But baptism in the name of Jesus Christ makes sense and is also consistent with the New Testament!

No. 1104:
Baptism three titles or three denominations makes no sense. But baptism in the name of Jesus Christ makes sense and is also consistent with the New Testament!

Copied from the web, written by Geir.
Photo from a baptism in the Jordan River in Israel. 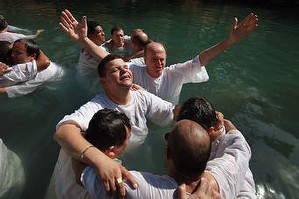 Go therefore and make disciples of all nations, baptizing them the Father and of the Son and of the Holy Spirit, Matthew 28:19

Allow me to reproduce this that explains the dilemma: "There are many scientists who believe that Matthew was originally written in Hebrew, and that the original manuscript is in the Vatican. Man also believes that this particular Scripture was changed to support the Trinity that speaks of THREE GODS. There is a HUGE difference between Trinity (three separate gods) and Three - Unity, which is one God who manifests himself in three different but perfectly harmonious way as Father, Son and Holy Spirit. Elohim in Hebrew is plural, but it is Echad - ETT.

Echad is a Hebrew word used in the Bible and refers to three consensus and the union between man and woman. It represents a (one) in the device and not in number.

1. Genesis 2:24 Therefore shall a man leave his father and mother and be linked to
his wife, and they shall be one (Echad) flesh.

The Hebrew word signifying a / one in meaning number, is yachid - in the original text used this word never in communion with God.)

This is the only scripture in the New Testament that speaks about being baptized in the Father (YHVH), the Son (Yeshua) and the Holy Spirit (does not have a name,
but is rather a function) name.

ALL the other Scriptures throughout Acts reviewing baptism
by full immersion into the name of Yeshua! His death, burial and
Resurrection! Father did not die, was not buried or resurrected!
Neither the Holy Spirit died, nor were buried and resurrected!
The only person who died was the Son Yeshua, the Messiah and we identify with Him and we become one with Him by baptism to worship the Father in Spirit and Truth
while we obey and are led by the Holy Spirit. (John 4, Romans 8)

Therefore we are buried with him by baptism into death: that like as Christ was raised from the dead by the glory of the Father, so we also should walk in newness of life. For if we have become united with Him like His death, we shall be also in the resurrection. Romans 6: 4-5

Countless Christians have been baptized on wrong premises because of a fatal lie, based on purposeful mistranslation of a Scripture that are made because of doctrines that are created by demons and humans.

Then Peter said to them, "Repent, and each of you be baptized in Yeshua Messiah 'name for the remission of sins, and ye shall receive the gift of the Holy Spirit. Acts 2:38.

And he commanded them to be baptized in Yeshua Messiah name.
Acts 10:48

When they heard this, they were baptized (eng: i) Lord Yeshua's name. Acts 19: 5