No. 1100: It is nit-picking to be concerned with whether Jesus is born, created or formed, as long as it is God Yahweh is his origin!

No. 1100:
It is nit-picking to be concerned with whether Jesus is born, created or formed, as long as it is God Yahweh is his origin!

Picture Jesus's resurrection there an Angel "guarding" the grave but Father had already awakened Jesus and he had been given a new and wonderful glorious body that we one day will get, as long as we have faith.
Room. 1 3 It is the gospel of His Son, Jesus Christ our Lord, come as a human descendant of David, 4 by the Spirit of holiness vindicated as God's mighty Son by the resurrection from the dead. 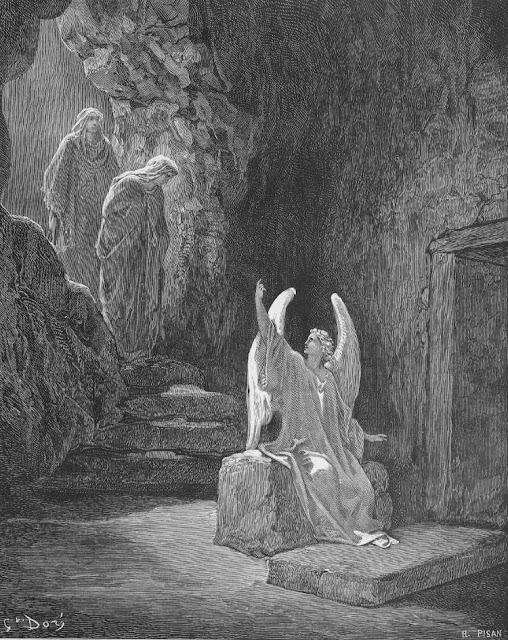 Joh. 13. 3 Jesus knew that the Father had given all things into his hand and that he was come from God and went to God.
16. 28 I came from the Father and have come into the world. I am leaving the world and going to the Father.

Through several article powerful evidence that Jesus is the only true God, but a created being that we all others. It is only and solely Yahweh God Father Who only hath immortality, and that no one can juxtapose themselves with and when. Even Jesus said that God was bigger than him, but denying than Jesus' own words, so one can also defend the Trinity. This is all really about liberals versus theology. Where the word of God says that Jesus is the firstborn among many brothers etc.

No people are literally children of God - we are all adopted sons and daughters. But God's word says that we are children of God, we shall not believe God that we are his children? Or should we engage with nit-picking and waive adoption?

We are actually as much a child of God who Jesus is, although we are not legitimate children like him. We are all adopted into God's family. Not just that we have adopted, we are also adopted from God's enemy - Satan. Yet scripture says we are BORN AGAIN! HMMM, should not the Trinity contradict God even here, they invent a trinity doctrine which is absolutely absurd and that really no one can understand, why this mystification and this arcane regarding the Trinity.

I wrote this in a previous article that I will bring, illustrating what I here say:
If Jesus is born or created has no significance as the word of God says it's the same thing! Here only confuses than ignoring what's important, that Jesus came forth from God the Father - Yahweh.

Psalm 139. 13 For thou hast possessed my reins:
you knit me together in my mother's womb.

14 I thank you that I am so wondrously made.
During your works are wonderful, I know that well.

15 The bones mine was not hidden from you
when I was made in secret show and woven deeply into the soil.

16 Your eyes saw me when I was a fetus.
All days are written in your book,
they got form before one of them came.

17 Your thoughts, O God, is precious to me,
the sum of them is unimaginable!

There is a huge, huge nonsensical when one is concerned about Jesus are created or born, that cause the same after the word learn.

Is a totally twisted religious as are more concerned with words and expressions, than with what lies behind the words and what they represent. If one says that Jesus is shaped, formed, created, or born, so it cause the same. Jesus came forth from the Father, as he himself said (Joh.e. 16. 28 I came from the Father and have come into the world. I am leaving the world and going to the Father.)

Here reviewing David how he was in the womb and then born.
Notice how David describes everything that happened to him in the womb before he was born.

For thou hast possessed my reins; you knit me in my mother's womb. Furthermore, he writes, wondrously made. Even the bones were not hidden from you when I was made in secret show and woven deeply into the soil.

The Bible describes the new birth and being a creature in the same way. Why a suspended up in if I or others use this about Jesus that he is a creature, or if he is born? There is something totally stupidity of it all, all together it is Yahweh who is behind, it keeps to know.

Joh.e. 3. 3 Jesus answered, "Truly, truly, I say to you, unless one is born again he can not see the kingdom of God."

Same experience describes the apostle Paul here: 2 Cor. 5. 17 Therefore, if anyone is in Christ is a new creation. The old has gone, the new has come!

And not only this, here we find the Bible describes the new birth once more: Titus 3 5 He saved us,
not because of our righteousness,
but because he is merciful.
He saved us
the bathroom which regenerates
and renewing by the Holy Spirit,

When the new birth referred to as a bathroom. Thought so wonderful and great that the Bible describes the same issue, just from different angles so that the whole, the diversity and the details will manage and better off!

Final Comment:
Now you can choose either to be difficult, or open up for biblical truths. What is the point of this I here teach, it is that Jesus has a beginning, which Yahweh has not. This is the Bible's clear teaching, that it is only and only God - Yahweh who has no beginning, and immortality. Jesus died, which says that he has something that Yahweh does not have. And who raised him from the dead? Yahweh, not himself, he was dead.

From my commentaries Ephesians 1. 19 and where very His power is with us who believe. With this power and strength

I must say that the term fullness of him who fills all in all, has been the subject of many interpretations. I will not weary you with them. I think the verse must be understood from the parallel in Colossians 2.9 to 10 In him the whole fullness deity bodily present, 10 and in Christ, who is the head of all principalities and powers, you also have taken part in this fullness.
All that Jesus is and has, he has given to the church by the Holy Spirit. We are filled with him. Therefore, the same force that God showed by raise Jesus from the dead, available with us who believe ,!
We believe this? Why complain when we so often over his own impotence? It is not interesting at all. God is able to let his force working through our weakness, yes, just when it seems the strongest!
This is what Paul testifies in 2 Corinthians 12.9. He struggled with a weakness, a thorn in the flesh, and asked to drop it. But God answered: "My grace is sufficient for you, for power is made perfect in weakness." - And then comes the strong words: therefore will I rather glory in my weaknesses, so that Christ's power may rest in me.
II. How do we get triggered this power between us?
Yes, this is all well and good, but to be honest, we see not so much to this mighty force. Will it be just fine words of a preacher who is paid to say it, or is it experienced reality in our own lives and in our congregation?
I think we have a lot of good with God, but he must be allowed to escape to in our lives.
And he does when we praise, give thanks, pray as Paul does in this paragraph - and when we obey Him.
When we pray that God's word, then we can be certain that we pray in accordance with God's will, and when our prayers are fulfilled.
1. Praise and prayer are inextricably linked.
When we praise and thank God, whether by our words or with our song, either with the good old songs or new choirs, so attention is drawn towards God and opens us for everything he has given us in Christ.
Thank Prayer focuses on who we pray to. The lift our gaze from the problems that can make us discouraged, the problem solver, and then we will be bold.
b. And when we pray, we stretch up our empty hands and welcomes what he wants to give us. In prayerful conversation with God the Holy Spirit to show us what he wants us to do.
c. And so we see that Paul thank God for the church he writes to. Now there was good reason for it, for he had heard of your faith in the Lord Jesus and your love for all the saints, v.16

20 he traveled Christ from the dead and seated him at his right hand in heaven,

You bear Christ oppstandelskraft in you. Then you share in his resurrection. When Jesus rose from the dead, so we stood up with him, because we are in him. How blessed it is to be in Jesus.
Hugo Odeberg say about our resurrection that it means "the whole human personality restoration of full stature, whereby nothing of what is man himself, is missing in it." In our profession, we say that we believe in the resurrection of the body. We should occur with our whole person, with our personality touch. When Jesus was human, he is human forever. In the same way you should be human in eternity. 1 Cor 15,42.43 speaks of the resurrection: "It is sown is perishable, it occurs in sincerity. It is sown in dishonor, it arises in glory. It is sown in weakness, it occurs in power." 1 Corinthians 15.42 to 43.
"Son of man shall send his angels, and they shall gather out of his kingdom all things that offend, and those who do iniquity. And shall cast them into the furnace of fire. There will be wailing and gnashing of teeth. Then the righteous will shine like sun in their Father. He who has ears, let him hear! " Matt 13.41 to 43.
But we shall also be spiritual people filled when we shall be like Jesus and the angels. My commentaries Mark 12. 25 For when they rise from the dead, they neither marry nor are given in marriage, but are like angels in heaven.
When we go into the eternal state and get a new body that Jesus. We will not have children as we get here. The Bible speaks little about our eternal state, but few words we have. One of the best is the apostle Peter.
2. Pet.3. 13 Nevertheless we, according to his promise, look for new heavens and a new earth, wherein dwelleth righteousness.
So we conclude by saying that "Blessed are they that do his commandments, that they may have right to the tree of life, and to go through the gates into the city." Rev. 22.14.

21 over all principalities and powers, above all the majesty and dominion, and every name that is named, not only in this world but also in the coming.