No. 1092: That word was kjød- who was Jesus - tells us that he has a beginning, and that he came forth from the Father and is divine!

No. 1092:
That word was kjød- who was Jesus - tells us that he has a beginning, and that he came forth from the Father and is divine!

That Jesus is the Word tells us that he has a beginning, as it never starts with a word, but with a thought. Who came with this was "before" word? Yahweh - God the Father, no one else. He was there before "the Word" when he is all life true origins and beginnings.
He who knows history knows that the whole thing was to distance themselves from the original Jewish believers, and to adapt to multi-Guderi among nations. Therefore, an in many ways to say that the Emperor Constantine and his family should have "honor" that this heresy became a part of Christian doctrine for nearly 1700 years although it is completely alien to the word of God, and his mother was enough which also affected the Emperor Constantine much in "Christian" direction.
Picture of Helena, or Flavia Helena, Emperor Constantine the Great's mother. She was born ca. 250 e. And lived until she was about 80 years. Picture is probably something converted, when she became "Christian" only when she was 63 years. 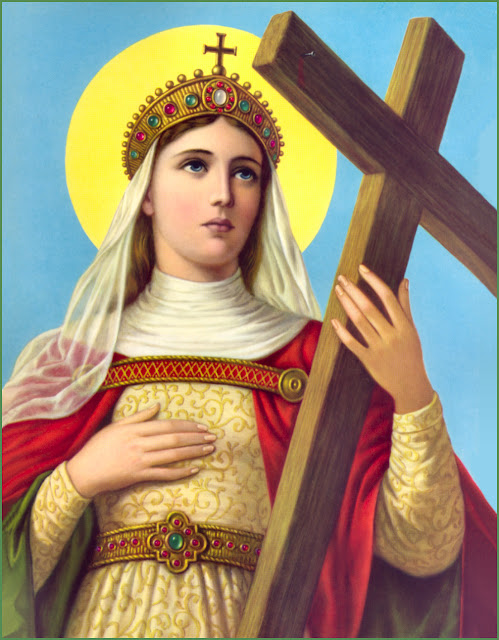 From my preliminary commentaries Gospel of John 1 14 And the Word became flesh and dwelt among us, and we beheld his glory, the glory as of the only Son from the Father, full of grace and truth.

V.14 must be the actual center of gravity throughout the prologue. It is instructive to study the way the verse is built on:
First we get two main clauses that say something about the Word: the Word became flesh "and ... dwelt among us."
Then follows a main phrase that says something about the church's reception: We saw his glory. "
The rest of the verse explains further what glory it concerns, first by saying where it comes from (as of the only Son from the Father "), then by saying what it consists in (full of grace and truth").

Let's look at these five sentence joints one by one:

1) Word became flesh "
So easily the biggest mystery in the history of the world is expressed. Three little words. But after reading about the Word divine rank in v1-5, so it's really groundbreaking to imagine that this divine logos entirely too would become a human being like us.
This was unheard of for a Greek way of thinking which despised it created. (ref. v.3). It created was the second-class and inferior. How could God demean himself to be one with it?
This was folly for a Greek logos philosophy (1 Corinthians 1:23). Those who would win the right knowledge and insight into life's secrets by abstract thinking, the audience will: Logos became man, was born on a particular day and died on a particular day. Logos could be seen, heard and taken on (ref. 1 Jn 1.1 to 4).
It was a blasphemous thought for Jews. They could probably be far when it came to distinguishing between different aspects of God, as we saw in terms of wisdom theology v1-2. But to say that this wisdom of God was made man, it was completely uantakelig. When exceeding one boundary between God and creation, and were guilty of the grossest blasphemy.
So it is here in v. 14 Johannes comes with what really distinguished Christianity from these other religions. This was so daring said that the church should fight to understand it for many centuries to come.
But it was a wonderful idea for all of us who accept the faith: This implies that God is not remote, but that he fully shares our plight!
We call this miracle of incarnation. In Greek, it says that the Word became flesh, which in Latin becomes incarnatus, or in Nynorsk: ikjøting. Christ - the Son of God - can be feed into an existence where he really carries a fleshly body, so he must feel both hunger and thirst, cold and sorrow, loneliness and pain. It's pretty amazing that we have such a Christ to believe in!
2) .. dwelt among us "
Also this is an unheard idea for a Jew. God had the chosen his residence in Israel: First, in the tabernacle that accompanied the people in the wilderness (2 Mos 40.34), since the temple in Jerusalem (see the temple dedication and prayer of Solomon in 1 Kings 8.1013).
But now says v.14 that God makes his residence in Israel by the Word. Thus it is said indirectly that the temple is past. Now God's presence linked to the person of Jesus.
We find the same theme clearly expressed in the 2.13 to 22, where Jesus after tempelrenselsen proclaims himself as the new temple. See also John 4.21 to 24: The future of divination must not be tied to a specific location, but must be in spirit and truth. So we let Christians to flock to a particular sanctuary in a specific place to seek God where he is finding. Jesus person is now the key meeting point between God and man.

15 John bore witness of Him and cried out: "It was about him I said: He who comes after me is preferred before me, for he was before me."

Who was before John? We read several places in the OT that Jesus was both with Israel and had appeared to them. We read in 1 Corinthians. 10. 4 and drank the same spiritual drink. For they drank of that spiritual Rock that followed them; the rock was Christ. And Jesus appeared also several places. Daniel 3. 25 Then he said, "But I see four men walking about freely in the fire, and they have not taken any harm. The fourth looks like a son of the gods. "26 Now Nebuchadnezzar went to the door of the blazing furnace and shouted," Shadrach, Meshach and Abednego, ye servants of the Most High God, come out! "And Shadrach, Meshach and Abednego came out of the fire. Here they were not three anymore, but four when Jesus in his pre-existence with them as god-son who was the Son of man when he came to this earth and became you and me equal.

16 Of his fullness we have all received, grace upon grace.

Although this is commentaries I will come with a personal testimony. I was before I became a believer and reborn an active and highly competent football player. Could probably run it very, very far. But when I was saved and later baptized in the Holy Spirit and got the call to preach, I gave up on a football scholarship. Although I'm sure could have been both rich and famous through football, I do not regret one day of stasis 100% in Christ, there is so infinitely greater. Here in time and in eternity. Simply a must stadigvek open their eyes and see it. It is not only grace that he has saved us, but when we begin to see the importance and greatness of this salvation; it is grace upon grace really, yes indeed!
Psalm 84 11 Yes, one day in your temple farms is better than a thousand otherwise. To stand at the threshold of the house of God is better than staying in a tent with godless. What is the King David says? It is better to stand to hand out songbooks, washing toilet laughing what entirely in God's church one to be the star and director of this world!

Final Comment:
Jesus as the Word made man, it tells us that he who is the Word had a beginning. It says nothing about the Trinity in the Bible, either in GT or NT. But the whole Bible is bursting to assert that God is one with one person - Yahweh. Why create a "new" learning where God is no longer one, but three?
He who knows history knows that the whole thing was to distance themselves from the original Jewish believers, and to adapt to multi-Guderi among the nations!