No. 1090: Jesus is the Angel of the Old Testament, which he says is a created being who we all others. It is the only true God who is not created!

No. 1090:
Jesus is the Angel of the Old Testament, which he says is a created being who we all others. It is the only true God who is not created!

1 Exodus 18. 2 As he looked, he saw three men stood before him; and when he saw them, he ran to meet them from the tent door, and bowed himself to the earth.
Jesus in his pre-existence as the Angel and two other angels appeared to brother Abraham. Hehe, the whole Trinity with three Gods as Trinity believes that revealed himself to Abraham is at best like a fairy tale, there were three angels who appeared to Abraham. Or three men scripture says, not three Gods.

From Wikipedia: Bible specifies only the names of two angels - Gabriel and the archangel Michael. Some explain this by saying that it is to prevent the angels will be shown undue honor or worship, according to the first commandment: "Thou shalt have no other gods before me." Several Bible accounts show that the angels themselves do not want to give his name, probably because they represent God and not himself.

The word angel shape engill on old Norwegian and angelus in late Latin. It derives from the Greek angelos, "messenger," and is related to the word gospel.

Jesus as Lord Engel together with 2 other Angels. We know that Jesus was an angel who became a man like us. Scripture says that he is the angel of God that we find in the Old Testament. It is strange that a jump over this doctrine 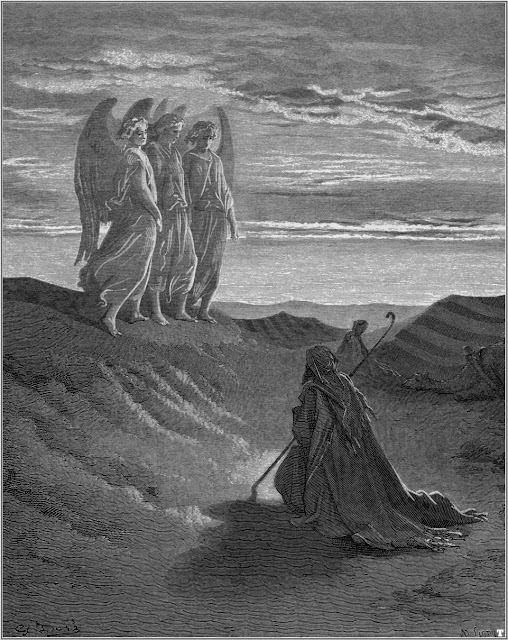 Psalm 90. 2 Before the mountains were born or you brought earth and the world, even from everlasting to everlasting you are God.
Isaiah 44. 8 Do not tremble not! Have not I told thee from it and declared it? You are my witnesses. Is there any God besides me? There is no rock, I know not any.

Let's turn it fixed right away, it is only God the Father - Yahweh - Abraham, Isaac, and Israel is the only true God. Although Jesus is a created being, which he says both itself and we find coverage for this in both the Old and New Testament.

An example of this is in the Old Testament where Jesus is referred to as the Angel of the Lord, and all the angels are created beings teaches writing.

Angel of the Lord

When we look at GT, we find that Jesus on several occasions came down to earth from heaven, and that this was not only when he was born as a human being. Jesus came along with two angels visiting Abraham in his preeksistens, notice that it was not only a spiritual beings such as Holy Spirit is, because they ate and drank with Abraham. We read in 1 Mos 18: 1-8 And the LORD appeared unto him in the plains oak-grove, as he sat in the tent door in the heat of the day. 2 As he looked, he saw three men stood before him; and when he saw them, he ran to meet them from the tent door, and bowed himself toward the ground, 3 and said, Lord, If I have found favor in thy sight, pass not away from thy servant: 4 Let a little water, that ye may wash your feet, and rest yourselves under the tree! 5 And I will fetch a morsel of bread, that you may fill the soul of you before I go further - since I now have come to your servant. They said: Yes, do as you say! 6 And Abraham hastened into the tent to Sarah and said: Arise, take three measures of fine flour; knead it and make cakes 7 And Abraham ran to the herd, and fetched a calf tender and good; gave it to a servant, and he hastened to dress it. 8 And he took butter and milk and the calf which he had dressed, and set it before them; and he stood by them under the tree while they ate.
In GT's time spent not name Jesus, when disclosure of encounters with Him, but most often it is the Norwegian rendered "angel of the Lord".
We also find that Jesus came in different forms of expression, as in Joshua 5, where Jesus is referred to as the captain of the Lord's army. Personally I think that when 185,000 were slain, it was not Jesus himself but a warrior angel in their position, much possible Archangel, who performed this action.
2. Kong 7:35 p.m., and that night it happened that the angel of Yahweh went out and struck one hundred and five and eighty thousand men in the Assyrian camp; and when they arose early in the morning, behold, they were all lying there dead bodies. It uses the term Lord's angel, but I believe that God has many angels as he sends out different missions and they are also referred to as the Lord's angel.
In Joh.åp we meet several angels in connection with judgments.
The word "angel" has become somewhat misleading to only deal with a certain group of spiritual beings, while the word's meaning is "a messenger" with no further description of the messenger appearance or being (source: Heb. Mal'ak).
That said you exploration voyage start in GT:

Angel of the Lord is a messenger from heaven to humans, sometimes with good bids, sometimes with warnings. All times we get a little description of who and how this messenger is and looks like.
Quotation:
1.Mos: 16.7 to 13,
7 angel of the Lord found her by a spring in the wilderness, the spring on the way to Shur. 8 He said, "Hagar, Sarai's maidservant, where you come from, and where are you going?" She replied, "I have escaped from Sarai, my mistress." 9 Then said the Lord's angel to her: "Return to your mistress and bend under her hand! "10 And he continued:" I will greatly multiply, as numerous that no one can count it. "11 Then the Lord said angel to her:
"Now you are with child and shall bear a son;
you shall call his name Ishmael,
for the Lord has heard your affliction.
12 He will be a wild donkey of a man.
His hand will be against everyone
and everyone's hand against him;
He will settle down
as for the face of all his brethren. "
13 Then she gave the Lord, who had spoken to her, "You are God who sees." For she said, "Have I also here gotten a glimpse of him who sees me?"
This is a story that strongly confirms the presence of God, and not only to send any messenger (angel), by sending Jesus to Hagar. (When the Lord opens the eyes of devout Muslims for this, so it's going to be many Jesus-followers of Muslims).
Among the angels, both with God and the prince of darkness, there is a strict rank-scheme. But in the demonic world there remains much turmoil and disarray. Quite the opposite of what it is within the holy angels ranks. (Just like in Palestine Arabs where they fail to get it, the only thing they agree on is that di will hate Israel, and it is clearly triggering of demons they are under. This is really all that rise up against Israel. They go against God's eye stone.)
There are archangels and angels subject to them. Prince of Darkness was once the archangel Lucifer. An angel, under archangels, will never dare to exalt himself to God (they know what happened and will happen with Lucifer after he thought himself as equal to God and was cast out of heaven).
When this angel who spoke with Hagar says "I will greatly multiply" and the name he gets Hagar "You are God who sees". Angel of the Lord would not dare to let themselves be called this if he was a subordinate angel, not God (Jesus) himself.

Quotation:
1. Mos.21.16-20:
As she sat there, the boy started to cry. 17 God heard him crying. When God called angel from heaven to Hagar and said, "What's the matter with you, Hagar? Do not be afraid! For God has heard the boy crying as he lies there. 18 Get up, pick him up and hold him by the hand! For I will make him a great nation. "19 Then God opened her eyes, and she saw a well. She went and filled the bottle with water and gave the boy a drink. 20 God was with the boy. He grew up in the desert and became an archer.

-again Jesus as "angel of the Lord". Pay particular attention to the last part of verse 12, "Now I know .... have not withheld your only son for me." These words are never used by a messenger when a messenger always refers to he who sent him. Opposite Abraham appears that "messenger" is identical with God, and not one of the subordinate angels. This repeats itself in several verses a little further down in the same chapter:

Quotation:
1. Mos.22.15-18:
15 Once again the Lord called angel to Abraham from heaven 16 and said: "I swear by myself, declares the Lord: Because you have done this and have not withheld your only son, 17 I will bless you and make your descendants as numerous as the stars of heaven and as the sand on the seashore. Your descendants will take the cities of their enemies, 18 and in thy seed shall all the nations of the earth be blessed because you obeyed my voice. "

Total used the Hebrew word "Mal'ak" 197 times in the Old Testament, and most times it is not shown to a subordinate angel / "messenger" but the "angel of the Lord" / Jesus.

This shows us, among other things how great Jesus is, not only limited to the description of the man who allowed himself to be crucified for our sake, but also a God who delights in people and went between the people in the Old Testament's time.

Is Jesus an angel or God?
Jesus is also an angel, a messenger of God? Yes, but there are also others in scripture known as the Gabriel, Mikael etc.
God, we must also see that a "lineages" when both angels and humans is called God or Gods. But Jesus is special, yes.

Final Comment:
We only realize that the Trinity is a reactionary and unbiblical teachings. Go to the word of God, and you will find the true teaching and the true understanding of faith in God which is among the first principles of the Word of God (Heb. 6 1).