No. 1095: Jesus their many names and descriptions in both the Old and New Testament clearly shows that he is a product of Yahweh, but not Yahweh!

No. 1095:
Jesus their many names and descriptions in both the Old and New Testament clearly shows that he is a product of Yahweh, but not Yahweh!

Image of Jesus when he was a small delightful and lovely boy with his lovely mother Maria.
Here we see the incarnation of Lord Engel who became man. It was not God who became man, but the Son of God, scripture says in the little Bible, and let us believe the word rather than what people say and think.

Joh. e. 3. 16 For God loved the world that he gave his only begotten Son, that whosoever believeth in him should not perish but have eternal life. 17 For God sent not his Son into the world to condemn the world; but that the world might be saved through him. 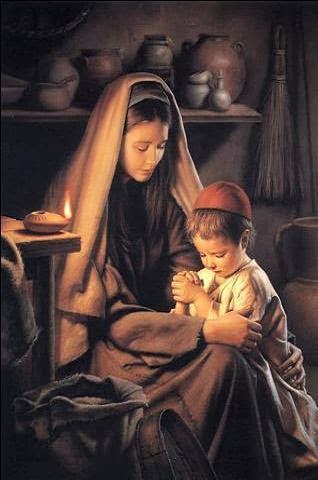 Jesus, I've discovered from the scriptures in the second article that he has a beginning and came forth from the Father, and therefore is Divine but not the only true God.

Here comes more as supportive of this I argue, especially God's word description of him, not to mention the titles and descriptions type gives him!

Jesus is the Son of God - the only true God!

I can not repeat myself all the time, but Jesus is not God, but the Son of God. Yes, God is he in the way that angels are there, a messenger. But not the one true God - but God's Son.

During his trial over the Jewish leaders then demanded the highest priest of Jesus: "I demand of you under oath by the living God: Tell us if you are the Christ, the Son of God" (Matthew 26:63). "Yes, it is as you say," Jesus replied. But I say to you all: In the future you will see the Son of Man sitting at the right hand on the clouds of heaven "(Matthew 26:64). The Jewish leaders responded by accusing Jesus of blasphemy (Matthew 26: 65-66). Later, before Pontius Pilate, "The Jews insisted," We have a law, and according to that law He must die, because He claimed to be the Son of God "(John 19: 7). Why would claiming to be the Son of God be considered blasphemy and be worthy of a death sentence? The Jewish leaders understood exactly what Jesus meant by the phrase "Son of God." Being the Son of God, is to be of the same nature as God. The Son of God is "of God." They claim to be of the same nature as God to actually be God was blasphemy to the Jewish leaders, and therefore, they demanded Jesus' death, in keeping with 3. Deuteronomy 24:15. Hebrerbrevet 1: 3 expresses this very clearly, "The Son is the radiance of God's glory and accurate picture of Him."

Final Comment:
Jesus has many other titles and names. To name a few: Immanuel - God with us. Prince of Peace, under adviser, Jesus of Nazareth and many other names.
That it says that Jesus is the Eternal Father and other synonyms that make him God, then it is misleading and enticing if one does not understand the context it was written. And that the Norwegian translation is misleading.
Here are some thoughts about this and what I have written before.

Isaiah 9. 6 For a child is born,
a son is given.
Dominions of masters placed on his shoulder.
He has been named
Under Full counselor, Mighty God,
Eternal Father, Prince of Peace.

That Jesus is the Eternal Father shows us that he is not from eternity but from tomorrow morning. He is eternal, and he is the Father when he is the father of a new genus. As ia we find lessons on from Romans 5 about the two people. And the first and last Adam. Adam was the ancestor of all humans who populate Earth. Jesus is the ancestor of all those who will populate the sky and the world to come. Not harder than this. Such as the Trinity who builds his entire doctrine around scripture and some others are not anything other than a strong delusion!