No. 1326: The verdict against hairdresser Merete Hodne from Bryne is not good, then Hijab is not mentioned in the Koran, but is a political and cultural symbol!

No. 1326:
The verdict against hairdresser Merete Hodne from Bryne is not good, then Hijab is not mentioned in the Koran, but is a political and cultural symbol!

Hijab came into vogue after the Iranian revolution in 1979. Admittedly, women had various forms of headgear and veil for centuries. Many of those who began to wear the hijab in 1980, had previously been exposed or used headscarf that showed parts of the hair and neck.

Image of woman who is Muslim but who was unfaithful, and with the death. The man goes free, but not the woman. Hijab, nikab and the whole religion or ideology Islam is both oppressive to women and misogynist. The verdict in Bryne Court are obviously of great ignorance about Islam, which simply is a dangerous and fascist mindset and lifestyle that can easily lead to brainwashing and I will strongly denounce in from this religion! 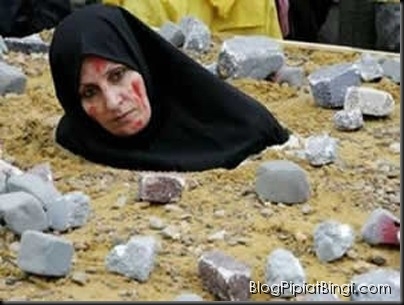 This goes on that one in a professional or similar activities refuse a person goods or services because of the person's skin color or national or ethnic origin, religion or belief, gays orientation or disability.

Religion can it not be, when the Koran does not at reviewing hijab. But hijab is a political and cultural symbol of the sword religion Islam!

The Norwegian government harasses now more and more inhabitants of the land!

We see it against good parents how child welfare services in Norway harasses good and gifted parents!
And now, contrary hairdresser Merete Hodne from Bryne who rightly points out that this is a symbol that is easily react against even be scared of! Realize very well that she refused oppose this headdress that is not mentioned in the Koran, but is said a garment that tells of submission!

Why are not Norwegian women up and tell the truth? Islam is a killer religion and fascist in its mark!
Why would people experiencing oppression still defend such oppressive faith, and in the current situation it is time that we realize the truth and argues how degrading and inhuman this religion really is. Some dare to react, now we have to stand together against this that will stifle and repress us in our democracy.

Everything is turned on head here. Hijab and Muslim has got everything for great power.
They come from totalitarian states and conditions, and invokes freedom, yet they want to impose this cruel system worldwide.
It will suppress and repress us here in Norway. I know this all too well, Muslims know how to exploit. And then they get under both dumsnille Norwegians and now authorities verily too!
Islam and the ideology and political / religious governance is fundamentally totalitarian and want and want world domination!