Christian people love to illuminate what the world's people are doing, but it's really us believers "Mid rendering» indifferent.

The truth is that when someone is now busy with plural marriage - so-called polyamorous. It is the "good guys" kind of sin. When the acting out partying and filling takes place, then it's too bad things going on that people act be an animal, I will not reproduce it.
In other words, be concerned with polyamorous, is to strain out a gnat but swallow a camel that Jesus warned against. It is to rule the world, and they provide a message of salvation through Jesus Christ, but to us believers it is different. There we hear about sin, grace, restoration and forgiveness.

Photo of Rune Rudberg praising and singing that he has had more than a thousand women.
But he is not a major or minor sins that reason, he is a sinner and does just what a sinner must do - sin! We as Christians do only what we do, good deeds when we are the light of day.
But darkness children do unfruitful works of darkness, which is natural for a ugjenfødte man! He does not regret anything he says, why? Because he has only followed his fallen nature, who crave sin and still more sin! 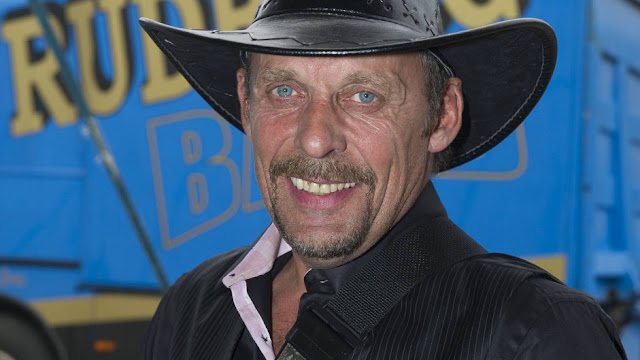 Inger and Jan Hanvold as the word of God living in adultery. It does not matter how much good and how much than asking for forgiveness, if than not repented! Hanvold has been married before, as a Christian, and do this;

Whether reconcile himself with his first and right wife, or live single!

Inger Hanvold is really a free woman, as she has never been married with Jan Kaare Hanvold in God's eyes.
Only in Satan's eyes, that is a liar and is not in truth!

Has held 1:04 to 5:00 article in the past, and this is as an attempt to teach and explain the huge difference it is for us believers and children of the world. Then how God looks at us, and what is required and expected of us. Contra, the world's people who are constantly under the wrath of God and are dead in their sins and transgressions!

What is the goal for us believers?

2 Joh. 8 Take heed that ye do not lose what we have wrought, but that we receive a full reward

It is that we should get full pay when we meet God the Father and Jesus face to face, and everything is revealed at Christ's court. Hear these beautiful words:

Matt. 25 21 His lord said unto him, Well done, thou good and faithful servant! thou hast been faithful over a few things, I will make thee ruler over many things; enter into your master's joy!

What will the unbelievers be held accountable for? In short, you weakness to Christ. When they hold God to be a liar, then no one can or will be saved by their good works. It is solely the belief in Jesus as savior, not anything else. Therefore sin - not how they live - but they have not accepted Jesus to the world, those who are not Christians!

I've tried several articles now achieved, it is totally flawed, unbiblical and heresy to point out sin for the world's children. Now one must not fall into the other ditch, if asked and explains what sin is. And it touches not believers, then it is perfectly legitimate. But as we see with eg. Jan Hanvold and Øivind Benestad. They make TV program that I've seen where they attack nonbelievers, while Jan Hanvold to be a pastor and shepherd. Divorced umpteen times and re-married umpteen times, in other words. A proper round burner and adulterer. Then it is so wrong it is most possible to be, with such a thing!

Scripture is clear, it is from the day we receive salvation in Christ Jesus. When we become a child of God - a children of light.

We will then return to responsibility for all, not just some. What we did before we came to believe, it is gone and removed. Once forever, we have become new creatures in Christ Jesus. Everything has been and everything is new, but we are also prepared to account for how we spend our lives, from the day we come to faith and are no longer a darkness children, but a children of light!

We as Christians can sin - but then we have to ask for forgiveness and repent!

1 Jn. b. 2. 1. My children! I write to you, that ye may not sin; And if any man sin, we have an advocate with the Father, Jesus Christ the righteous: 2 And he is the propitiation for our sins, and not for ours only, but for the whole world. 3 And hereby we do know that we know him, if we keep his commandments.

It is not "unnatural" for us believers that we can fall into sin, but we have to pick ourselves up. Start again, and go on with God! But repentance is needed. As it is today where one asks for forgiveness, but do not make up sin and repent. There is seduction, and likewise bad as Catholics deed path. Where one may give alms, pray for the dead and other to be saved! But none of this holds for salvation.

Are you divorced as believers, and marries again. You can ask God for forgiveness a thousand times each day. They help not a millimeter, it just makes the situation worse!

Scripture says that you either need to reconcile with your spouse or live single, do something else. So are you fornication, and is an adulterer.

We see a seduced Christianity where one always gives itself grace - but points to the world's people their sins how bad it is!

Yes, and the Christians bite. Here Satan really gotten the better of God's church today. Forget the world, it is what goes on among us believers as applicable. Everything else is really insignificant, when the world's people are dead in their sins and transgressions 24 hours a day and 7 days a week!

That's what we as believers do, which is of importance for God, everything else is irrelevant!

This is a hard saying, who can hear so did Jesus hear. How is this too, it's hard saying for certain, but it is God's word and what the New Testament teaches us!

So is the goal no. 2, to get full pay, and to hear of Jesus, "Well done, good and faithful servant! thou hast been faithful over a few things, I will make thee ruler over many things; enter into your master's joy! '
Could it be bigger, better and more glorious than this? The opportunity is for all of us, but then we must be willing and pay the price!