No. 1330: Website Sokelys typing the same about Jan Aage Torp as they verbally abused me to believe that I was an Antichrist - just get hate is some satisfaction!

No. 1330:
Website Sokelys typing the same about Jan Aage Torp as they verbally abused me to believe that I was an Antichrist - just get hate is some satisfaction!

It's wonderful to have someone to hate?

This know without a doubt Ansgar Braut and Torodd Fuglesteg (picture), who has been propagated such hatred on the web the last 3-4 years that they no doubt will fit in the category of Norway's two biggest and worst net roll. They write so that no one can take them apart from Polti, but they can not be bothered to do anything. So it's just a free-for these two nettrolene!

I started writing and was featured on the website Searchlight for ca. Three years ago, something I was approximately One year I expect? But it was impossible to continue there, although I can withstand just about anything. Hate and the hateful comments that went beyond my family and friends, was too much. I had to stop writing there!

I have no chore, time and opportunity to explain everything. But it turns out that for some even if they call themselves Christians, they have hated demon in him to such a degree. Just get hate - not love - so live a "happy"! The hatPastor and mockery apostle January Aage Torp is now actually become a target for some. But it is strange the mechanism by which an individual, a person must hate. Now it's the person who has begun to spread hate above all others, being fucked!

Here's something that's been written in Searchlights in the past, saying that now things have happened. About the better I do not know? But change it at least! 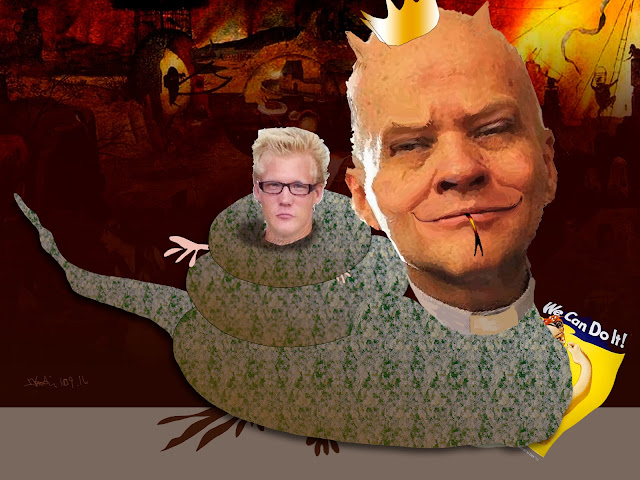 This is mention of Jan Aage Torp in Searchlight:

Torp's first priority should be to unite with their own children. How can he travel around the world as an apostle and have a poor or non-existent relationships with children? He is simply not credible.
His son Anders has told about events in childhood. His feelings must be taken seriously, says the pastor who in the same breath explaining that it was not such as Anders experienced it. And so he goes on continual writings in which he makes Anders almost a liar. Could it be a possibility that the pastor did not get along all that happened? Why can not he say it happened unwise thing in period and greatly regret that Anders was subjected to?
He is even a parasite and not least a clown. Behaves like an elephant in a china shop and then tries to emerge as the splendid fellow.
No, this is false and a good portion of double standards.
Strange how this pastor always ends as the hapless victim, even the whole Christian Norway deplore what he does. Showing his Christian sentiment against the three of his six children who have gone openly against him in public, and enabled him to what he is doing, spreading shit its packages against them?
He shows humility?
Showing Torp remorse?
I do not think Torp is a man of God. He has too much hatred, against too many.
The more Jan Åge Torp explain (and explain away), the more entrenched the situation.
Can not someone driving out demons to Torp?
Maybe he would have voted that one must beware of such harmful sects which his father represents.
Terrible what Anders Torp was exposed to in its infancy. Where on earth were his parents? Nobody saw the poor child?
Did not your mother there?
Her sister told her mother asked if she wished they moved from danger. It seems that they chose to do so, from his father's public grumbling that he had been involuntarily separated.
Can not have been easy for her in retrospect when you see how Torp doing. Does not look much Christian in it.
Kjell; I presume that you agree that to deal with / seek reconciliation with his son, does not belong on NRK, in a debate program?

This is some of what I wrote yesterday, to bring it to the end:

Seeing that a "code" is breaking here on Searchlight.
It's victimhood Jan Aage Torp does not go into further!
You've made great progress, it pleases me.

Just want to finally congratulate you with the nyvunnent experience that Torp is not the person, and declare he wants to portray itself as.
A scam of rank.
Slick as an eel, but really hateful!
Yes, I hold in all that I have written and spoken, it turns out that Christensen had after all right! 😁😇😀

Then we're back where we were before that Torp is the victim, with his victim.
Now you've got a "new" villain (the right).
It is Jan Aage Torp and another in victimhood (Anders Torp).