No. 1337: Why is it so marginal support among believers for the Heavenly blog and Vision Norway has many, many who support themselves?

No. 1337:
Why is it so marginal support among believers for the Heavenly blog and Vision Norway has many, many who support themselves?

Picture of Egil Svartdahl which is one of the many, many others who have gotten enormous mue confidence among believers. But never preached anything but a herd as itching ears and do not wake up the conscience of the apathy and sleep which is the spiritual condition unfortunately most believers today!

Efes. 5. 8 For ye were once darkness, but now light in the Lord; walk as children of light - 9 for the fruit of the Spirit is in all goodness and righteousness and truth - 10 as Proving what is pleasing to the Lord, 11 and have nothing to do with the fruitless deeds of darkness, but rather reprove them 12 For the hid by them is shameful even to speak 13 but when reproved are made manifest by the light; for everything that is revealed is light. 14 Wherefore he saith, Awake, O sleeper, and rise up from the dead, and Christ will shine on you. 15 See therefore how ye walk circumspectly, not as fools, but as wise, 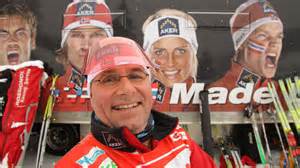 Throughout my childhood, I had as a goal. To reach the longest possible in football, and trained every day between 3-5 hours. Of course, some days more, and other days less on match day etc. But by and large it all, it was to train as elite sport today do. In many ways I was ahead of my time!
Planned, wrote up and had a plan to increase the amount of exercise, intensity and be structured! And to train football, so I ran with some versatile sport that was very good. But when I was 16 I was saved, and 18. I started a Bible, then it was a violation.

As believers, it has helhjerteheten followed me, but in the Christian context. Then there are many other things that "count". Being totally for God and his word in today's Christian Norway is in many ways a thing of the past! You have got to be a scam, good diplomat and could overlook the most part that violate God's word!

Why do I and the Heavenly blog such trouble getting progress, although we unlike Jan Hanvold and Vision Norway both preach and practice the word of God ?!

We read about the spiritual condition in the end times:

Matt. 24. 8 All these are the beginning of sorrows. 9 Then shall they deliver you up to tribulation and kill you, and ye shall be hated of all nations for my name's sake. 10 And then shall many be offended, and shall betray one another and hate one another; 11 and many false prophets will arise and deceive many. 12 And because iniquity shall abound, the love of many will grow cold most.

We read that in the end times - times we live in. Then the true believers experience the strong resistance, but the false believers the opposite. In other words, the way is open for the false - but the road is "closed" for the real, true and those who follow God and the Lamb!

We read several places about the same, here are a:

2 Thess. 2. 7 For the mystery of lawlessness is already at work, only he who now restrains, be cut off; 8 And then shall that Wicked be revealed, whom the Lord shall consume with the breath of his mouth and bring to nothing by the brightness of his coming. 9 And his coming is after the working of Satan, with all lying power and signs and wonders, 10 and with all deceit of unrighteousness for them that perish; because they received not the love of the truth, that they might be saved. 11 And therefore God shall send them strong delusion, that they should believe the lie, 12 that they all might be damned who believed not the truth, but had pleasure in unrighteousness.

Notice that it says the mystery of lawlessness, what mean by that? Simply that they take away God's law - a marriage applies to Christian life. With that it comes while they "love" each other, the faithful against each other etc. The word of God says, until death, will be "replaced" with something similar. But not what God's Word really says!

In other words, this the interchange that is the work of Satan. It is now so widespread in Christendom, that we have not really gotten a Christianity. Hate, dislike and excludes the true, genuine and pure gospel!

I'm writing in the headline the following:

Why is it so marginal support among believers for the Heavenly blog and Vision Norway has many, many who support themselves?

Now it is sad that many of those who actually supports the Heavenly blog and my service do it wholeheartedly. All too many people actually believe this proclamation, makes so little out of it all.
While those who believe in Vision Norway and Jan Hanvold, supports him, and it wholeheartedly. But then operates Vision Norway and Jan Hanvold totally, totally different.
There is an almost fleeced for money, give money as next ALMS to be saved and have God's favor.
And that there are many, many lonely people who have this as a "church" where Hanvold presses, begs, threatens and manipulates them to give both tithes and sacred gifts. If not, then comes the judgment of God and all that is a curse on them. Especially those believers who do not tithe and sacred gifts to Jan Kaare Hanvold will experience to fill God's judgment and curse!

I and my wife work full time, and is not dependent on the support to get out the message. We live like the apostles and early Christians in all parts, to be re-married as believers. And manage ourselves, as the Apostle Paul la diligence. In other words, we are diametrically opposed to Jan Hanvold and Vision Norway!

2 Thess. 3. 6 But we command you, brethren, our Lord Jesus Christ, that ye ye withdraw yourselves from every brother that walketh disorderly, and not after the tradition which he received of us. 7 For yourselves know how you ought to follow us after; for we lived not improper among you, 8 nor did we eat bread of any one for naught, but with toil and labor we worked night and day, lest we should be certain of burden; 9 not because we have no right to it, but to give you an example in ourselves, that ye might after follow us; 10 for when we were with you, we commanded you, jo and that if any man will not work, neither let him eat. 11 For we hear that some walk among you disorderly, working not, but give heed to things that do not come by them. 12 But such command and exhort in the Lord Jesus Christ that they should work quietly and eat their own bread.

Notice verse eight special, "nor did we eat bread of any one for naught, but with toil and labor we worked night and day, lest we should be certain of a burden to you."

We ticking not for money, just give the opportunity. And says that God will give you what he reminds you, and you have faith. And that we live in accordance with God's word, we are followers after Christ. This is exactly what the believers in Norway dislike and want to hear.

They can hear that others would have followed Christ, but when one even begins to live by biblical principles.
And that one imposes others to do the same, then one is not long popular among the believers. Then comes a boundless hatred against one!

God's church will unfortunately right index finger against nonbelievers. But what does God's word on this? It is totally unbiblical pointing out errors and gloat in the wrong in the world and among the non-believers. We have nothing to do with the world to do, when to point out mistakes and sin.

1 Cor. 5. 9 I wrote to you in my letter that I should not with fornicators - 10 I did not altogether with the fornicators of this world or with the covetous and extortioners, or idolaters; for then must ye needs go out of the world; 11 but what I wrote to you was that you should not associate with anyone who is called a brother be a fornicator, or covetous, or an idolater, or a railer, or a drunkard, or robber, not even to eat with him. 12 For what have I to do with judging those outside? do not ye judge them that are within? 13 But those who are outside, God judges. Put away the evil from among yourselves

Here it is spoken of, we shall and may have with non-believers, whatever life they lead. We should not judge them. But what do we see believers do? They attack not believers of the one and the other. This is unscriptural, why? It's just a pity that the unbelievers do, that will take them to perdition. It's that they do not confess Jesus' name, they do not. So it does not help any way they live at all!

But what about faith? We shall be liable - for everything!

That is why Vision Norway and Jan Hanvold prosper. They say that as long as you give to this TV channel, though not always with direct words. So that's what they're promoting, live like you WILL, GOD GIVES GRACE. THIS IS JAN HANVOLD A CLASSIC EXAMPLE OF! HE LIVES TOTALLY AGAINST THE WORD OF GOD AND LIVE IN HOR!

BUT WHAT SAY MANY? HE DOES SO MUCH GOOD - EVEN IF HE LIVES IN SIN! NO, AND AGAIN A NO, HANVOLD IS NO CHRISTIAN, BUT A deception and adulterers. FOLLOW HIM IS AS JESUS ​​SAID, IF A BLIND LEADER A BLIND TO THE FALL into the ditch!

But have with me and the Heavenly blog?

We live according to God's word, and the high and biblical standards that we have in our lives. It fits not at all for today's Christians, who will have mercy throughout. In other words, it has become all turned head. This is nothing but a powerful seduction that we see taking place today!

What we proclaim the Heavenly blog, and I?

I'm not complaining, when I think that I and my wife will get full salary within its judgment seat of Christ to be true. While the rabble who follow today's Christian Norway will find it will be a disappointment today if they think that the worms work they bet on the following, inter alia, Jan Hanvold, Egil Svartdahl and today's so-called Christian leaders. All this we see within its Christianity is so bad, that it has created a bunch of "spiritual" person of mixed blood who hate God and His word.

That one would rather hear about sin in the world - that God's Word warns us against being busy.
But sin in God's church are defended, overlooked and accepted, here everything is turned on head!