No, 1543: Singer and songwriter Sveinung Hølmebakk divorced and remarried as a believer, is this straight from God's word?

No, 1543:
Singer and songwriter Sveinung Hølmebakk divorced and remarried as a believer, is this straight from God's word?

To write and speak against remarriage, especially among preachers, Christian singers, and those who are shepherds and leaders of the church of God.
So this has really been a battlefield of dimensions.
Picture of Anita Therese Hølmebakk and Sveinung Hølmebakk, who according to God's word are disqualified to be a singer / shepherd in God's church.
Sad, but that's how it is! 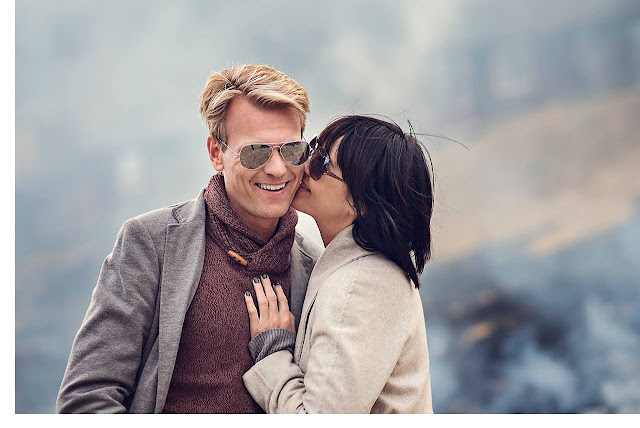 But let's try to bring out what God's word says.
Without attacking or lifting anyone forward. Just let the scripture decide!

James 3. 1. My brothers! not many of you become teachers, because you know that we will receive its heavier judgment!

We know that those who are to stand forth in a visible service to God and man, have a special responsibility and God really demands almost perfection.
In many ways one can say that preachers / singers / shepherds / elders are God's «nobility».

The nobility have privileges that others do not have, but also all the more responsibility.
Nobility commits it is called !!!!!

Make all the people of the land noble, by freeing the minds and refining the will.
Quote by Henrik Ibsen

This is also what God wants, then they must begin with the shepherds / singers / preachers and those in the leadership of the church of God.

Therefore, the scripture says the following:

1 Tim. 3. It is a credible word: If anyone desires a supervisory position, then he desires a good deed. 2 Therefore a watchman shall be blameless, the husband of one woman, sober, temperate, dignified, hospitable, able to teach others, 6 not a new convert, lest he be inflated and fall into the judgment of the devil. 7 But he shall also have good testimony of them that are without, lest he be mocked and fall into the snare of the devil. 8 Likewise, the ministers of the church should be worthy, not heavy-tongued, not inclined to much wine, not covetous, 9 those who have the secret of faith in a clear conscience. 10 These also must first be tried; then they must serve in the congregation, whether they are immaculate.

God demands almost perfection from his shepherds and overseers, therefore it says, among other things. that he should be one woman's husband.

In other words, only been married once as a believer.

1 Tim. 3. It is a credible word: If anyone desires a supervisory position, then he desires a good deed. 2 Therefore shall one overseer be blameless, the husband of one wife, sober, temperate, dignified, hospitable, able to teach others;

This has been the norm throughout the GT, NT and in the coming 1000 year empire.

We read that the scriptures give a clear testimony of the priest in the old covenant how he should live, who was in the same relationship of responsibility before God and his fellow human beings as the preacher and overseer are in the new covenant. Leviticus 21:14: “A widow, or a divorced woman, or a dishonored woman, or a harlot, does not marry. Only a virgin of his people shall he take to wife ».

We read that God gives the same testimony and demands the same from the Priest during the coming 1000-year kingdom that will serve the people of Jerusalem in Israel, where law and justice will be based. Ezekiel 44:22: “They shall not take a widow or a woman from whom her husband has divorced, but only virgins of the house of Israel. But they can take a widow who is the widow of a priest.
When the Scriptures are so clear when it comes to the priest in the old covenant and during the 1000 year kingdom, then it is no less clear when it comes to the church's time management, we who live under the most glorious and greatest privilege of all; «One woman's man».

2 Tim. 2. 20 But in a great house there are not only vessels of gold and silver, but also vessels of wood and clay, and some for honor, others for dishonor.
21 If any man abide in these things, he shall be a vessel unto glory, sanctified, useful unto his master, ready for all good works.

The saying goes.
"Tell me who you associate with, and I'll tell you who you are," is an ancient saying. It is said to have originated from a Greek sage who lived more than 400 years before Christ. It comes in different varieties. But for the most part, it probably means the same thing all the time.

What I focus on is the preaching and the preachers / singers / shepherds / elders we take part in, they will influence us in one direction or another. Our leaders who have a "platform" service.

Sthe cancer says in short the following. A preacher who teaches and lives right.
Who is a vessel to glory, for God.
Affects others, especially other believers positively.

While a preacher / singer / leader who lives against the will of God, who is not a vessel of honor. He influences the sheep in a negative direction.
The result is that some believers become a vessel of honor, while others do not.
I believe that all preachers and singers who are remarried as believers are on the verge of perdition, we must believe the words of the Bible. But the sheep that stand with these preachers and shepherds, if they perish. I dare not say that, but their life's work is about to "burn up", and they will not receive full pay.
By opening up to sin in the church, there are only negative consequences and it leads wrong.

Let me mention again that the shepherds / teachers / singers, those who have a ministry that is about influencing / guiding / communicating should be judged all the more severely.
Scripture says that the righteous one is hard to be saved, that preachers / singers who are to be judged all the more severely choose to go against the word of God, speak of a severe judgment!

1 Pet. 4. 18 And if the righteous man be saved, where is the ungodly and the sinner?

There are some things that I think many Christians will not understand.
That the world means a lot of nice things, I live well with that.
But that Christians do not see this, that we who stand in the pulpit or in public before Jesus and God.
Then we are "subject" to God and Jesus with our lives, our words, yes absolutely everything.
We do not stand up on our behalf, but as his representatives.

Scripture says.
2 Cor. 5. 20 Then we are messengers in Christ's place, as if God himself were exhorting us; we pray in the place of Christ: Be reconciled to God!

The basic text states that we are ambassadors for Christ.
What then is an ambassador?
It is an envoy for a state or Government / King.
He does not represent himself, but another.
As I see it, and understand the word of God.
Then it is absolutely necessary for a preacher, singer or pastor in the church of God. It is that he / she has the right and necessary qualifications in all areas of his / her life.

There are always those who say to me, are you so flawless, are you so much better etc.
No, I'm sure in many ways worse than these.
I'm just trying to point out what God's word says. That this should not be done without hearing such piss, I live with that. But we must all take into account that it is only the word of God that is the guide for life and doctrine, nothing else.