No. 1142: Unexpectedly, however, the more welcome support as Dag Paulsen and Manglerud police getting off Norway's two worst and ruthless network roll Ansgar Braut and Torodd Fuglesteg, Jan Aage Torp poodles and lackeys!

No. 1142:
Unexpectedly, however, the more welcome support as Dag Paulsen and Manglerud police getting off Norway's two worst and ruthless network roll Ansgar Braut and Torodd Fuglesteg, Jan Aage Torp poodles and lackeys!

Image of Torodd Fuglesteg which is one of Norway's two worst and ugliest line roll, which provides its full and warm support to Jan Aage Torp and Oslo police.
In their fight against me and the Heavenly blog.
January Aage Torp's major goal has been from day one to shut down the Heavenly blog, and often with a fictitious review. When he hates my preaching and teaching on marriage and divorce - then both Jesus and the Apostle Paul condemned this. They called it adultery, sin and adultery, the same as me!

Picture newspaper VG that Fuglesteg got graced the cover for one of his many, many pranks! But soon as wriggling he well on into prison or gets judgment? God even stop these evil and ugly people raging and mocks online that there is a God who has full control and overview? 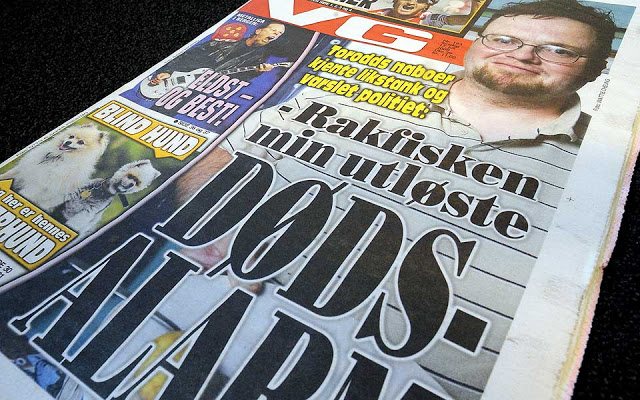 Jan Aage Torp believes he has been harassed by me, and the police was fooled!

It turns out that they strengthened their mistakes. When Torp's accusations were baseless then 99% is written about him, written by his fictional review. This lie did he serve freely in the District Court, but the Court of Appeal will not go when I and Brynjar Meling is aware that Torp is and remains to be a desire lies in truth!

Police lawyer Dag Paulsen on Manglerud Police even seems that it was strange and striking that both VGTV and son of Jan Aage Torp thinks the same about fun apostle January Aage Torp like me!

But the better it is, then that Norway's two worst, ugliest and most ruthless network roll as banging away at everything and everyone. Even children are being lied to!
As Torp do with his son on VGTV when he says he was not involved in it all, although there are videos Reaffirming Anders Torp truthful. While January Aage Torp lie and rubs her own son.

Here are the correct fine declarations of support that police jurist Dag Paulsen just have to take it up for all it's verse. Would have rather had a message of support by anyone, not Norway's two worst and ugliest web roll.
http://www.sokelys.com/?p=14916

1. Well Fredslund Wed, 03/15/2016 at 8:05 said:
In short: he believes that all who disagree with him are criminals! And that makes him actually a narcissistic dictator type, Kim Jung-Un!
Terror Isere the wonderful and very patient and indulgent police Manglerud with dozens fictitious and false reviews-shows and phones. Said, police do not report him for "harassment of a public official" (read many), is amazing.
All glory and honor to the great police Manglerud :-)

Well Fredslund which is one of very many aliases Ansgar Braut writes so "great" here: "it makes him actually a narcissistic dictator type, Kim Jung-Un!
Terror Isere the wonderful and very patient and indulgent police Manglerud with dozens fictitious and false reviews-shows and phones. Said, police do not report him for "harassment of a public official" (read many), is amazing. All glory and honor to the great police Manglerud :-) "

This must be "hot", and when the second largest network roll continues, then it is only to succumb and curtsy:

1. Torodd Fuglesteg Wed, 03/15/2016 at 6:06 said:
After being exposed, I mean "deferred" for JKC sake for over a year now, I have long ago established that he is mentally tilbakestaaende. Bottom line is such a list something you can expect from a person who really needs help and storage in a closed mental hospital.
I hope that those who know Siri Haugen, Hilde and others listed realizes that JKC is mentally tilbakestaaende and laughs of their inclusion on this list. Any doubters can contact me and Kjell for character references. My friends and and all others have long ago realized that JKC is a mental tilbakestaaende internet troll and his flaming me just means there's something wrong with me.

Do not know whether to laugh or cry, I have harassed Torodd Fuglesteg, ha-ha-ha! A good laugh prolongs life, but this laughter is really painful as this is a man without a total inhibitions!

That Torp encourages them to clergy me, and have never denied this only shows that what I have written and spoken about Jan Aage Torp votes 100%!
And these individuals writes openly that they include Jan Aage Torp's premier defender. They write even that they are Torp its lackeys and poodles:

Torodd
2 days 15 hours ago
Torp's obedient poodle and stråmann wish everyone a blessed nice Christmas from my humble dwelling w / whirlpool and beautiful wife while turkey, which I unfriended from FB yesterday, will finish in the oven.
Reply - Share
comment
Guest
Ansgar B
2 days 16 hours ago
While it seeps good smell of lamb ribs throughout the house, and I expect that the notified snow will low down here in the south-west of the country, I will take this opportunity to wish everyone a blessed nice Christmas :-)
With best regards
Straw Man from Jæderen ;-)

Here in this article you will find Torp's support for these two the largest and worst net roll: http://blog.janchristensen.net/2016/03/nr-1405-politi-jurist-dag-paulsen-siste.html

Jan-Aage Torp Wed, 20/10/2014 at 4:02 p.m. said:
When this matter with JKC has reached its necessary end, Kjell Andersen, then I think you with wisdom is able to modere necessary debates about difficult topics such as divorce and remarriage. I'll be happy to help as best I can, only I do not have to moderate itself

Otherwise, it's interesting to Braut Fuglesteg etc. which engages tough and necessary in relation to a blog that is confused, cruel, vicious and stupid - through and through.
It should be shut down, in short.

Jurist Day Paulsen on Manglerud police running case for Jan Aage Torp welcomed me and the Heavenly blog. Was even very surprised that Anders Torp, not to mention VGTV Ruth Helen honorable slumped with my outlook on things. We had the same understanding of reality he thought, as he and Jan Aage Torp had the same understanding of reality, talk about fooled by a manipulator and a mockery apostle.

I also told Paulsen that you should investigate these other case. But he would not when I could not prove that Jan Aage Torp stood with those who run the fake Smyrna blog, Torodd Fuglesteg and Ansgar Braut. Now those people leave their warm support for Manglerud police and Jan Aage Torp has given its full support to these. Talk about collusion, worse than anything I know even know about!