Photo by two newlyweds, who says that the marriage covenant is unbreakable. It lasts a lifetime, only death will terminate. 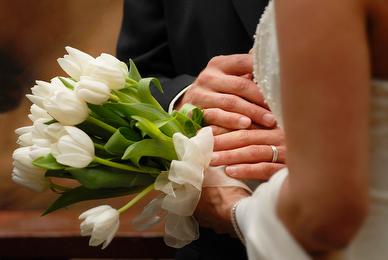 Should it be allowed to render public what the Bible says about sin or is it reasonable that a person who does it will be sued and get fines and other costs? Jan Åge Torp has sued Jan Kåre Christensen for this.

When Christensen example uses the word "immoral", he uses the same word as the Norwegian Bible translator uses. The words "immoral" and "whore buck" is synonymous in Norwegian. We have noticed that Jan Aage Torp has been doing a very poisonous campaign against gays in Norway.

He has done this on the grounds that the Bible must be followed because it is God's word. Then it is not unreasonable that we follow the same rules when it comes to remarriage. It may not be so bibeltroskapen should be selective: When others pay the price it's OK; when I have to pay a price, it is not as interesting. Then Scripture explained away. Then you have in reality made double sets rules: one set rules for others and primarily those I do not like, and another set of rules for me and those I love.

The word pastor comes from Latin and means shepherd. Many call themselves pastors today. But they are there in the biblical sense? Is pastor of the church or a congregation something a "pastor" need to be able to call himself a pastor? Many are in fact self-appointed pastors in that they rent premises and invites to meet. When there are enough regular visitors, "pastor" become a pastor. People coming onto the meetings have de facto accepted that whoever took the initiative pastor. Such a "pastor" often have no slave which Jesus requires of a shepherd. They only focus on their own needs. The Bible says that the false shepherds will be much stricter judged on Judgment Day. Therefore, this fake game very seriously.

A phenomenon that we see increasingly is ministers who actually comes in the same category as pop stars. Their activities are often very lucrative. It is pertinent to wonder how many preachers and pastors who had been in if they had been deprived of the rewards of money, power and admiration from people.

It was never intended that the church should be handed over to a person and his selvplukkete assistants. We all know the term "church planting" and individual reviewing the congregation's church that they have started.

In 1 Tim 3.1 to 7 and Titus 1, 5-9 Paul writes about the moral qualifications he expects the elders to have. These requirements are very strict. This was not without reason. A leader who lived in sin or living a reprehensible life dishonored God's name and created major problems for the church. A leader may partly be well regarded by outsiders. This was that the person should not be exposed to scorn and bring the church and the gospel into disrepute. The opposite was desirable as an important testimony to draw people to salvation.

A church without elders function was unthinkable for Paul. Titus 1.5: "I left you in Crete so that you would bring order to the thing that was still undone. You should appoint elders in every city, as I instructed you."

The danger of rule were present among the oldest. Diotrephes discussed in 3 John. 9-11 seems to be a person who focused on power. A desire to be "the premier" gave poor signals and was not for the benefit of the church (v. 10). John writes that Diotrephes loved to stand as number one and struggled to get the position. Therefore operated churches with letters of recommendation. Such a letter was required to obtain a leading position. This was to prevent suspicious people usurping power in the churches.

1 Cor 6.7: "... you have lawsuits against each other." After the time that Christians ought condition been different. This applies especially to people who are expected to assume a leadership position.

When NT speaks of a congregation elder, used always plural. Together they were able to lead the church and "be an example to the flock" (1 Peter 5.3). The elders were visible in the church. They were inserted (Tim 1,5) and dedicated to this service (Ap. Cur. 14,23). This meant that everyone could easily contact them for conversation and prayer. The oldest was particularly "put to the service" (1 Tim 1,12). The service made them servants and the idol was the Lord himself: "... he gave himself nothing, taking the form of a servant." (Philip 2.7). Only this was standard for church management. Manges experience is that this is not the rule today. Some managers appear as kings or rulers with near unlimited power. Jesus says that the greatest is the one who is your servant. He imposes his disciples to wash one another's feet. Leader Conferences are popular today. Is it likely that the aforementioned words of Jesus are central in these conferences? I have not heard about it. No other, either.

Jesus abolishes the divorce permission which Moses gave because the "hardness of heart" (Mt 19,8). Divorce Letter dissolves not matrimony.

But there are in Matthew an exception from the rule of absolute divorce ban. Matt 5.32 and 19.9: Jesus allows divorce if the spouse has committed adultery. Divorce is allowed but not prescribing if the spouse has had a sexual relationship with someone other than their spouse. Remarried prohibition is clear and unambiguous in the words of Jesus in Markus- and the Gospel of Luke and in Paul as the explicit reference to Jesus' authority enjoins spouses who stand, not to remarry (1 Cor 7, 10-11).

Ancient Christian strict vision; that divorce does not entitle him to remarriage; based on a more probable interpretation of the biblical texts than the Reformation vision, which was introduced by the humanist Erasmus of Rotterdam.

It was the time of the Reformation an independent judicial body that decided the question of guilt in a divorce case. This does not happen today.
Therefore fall all the talk of "the innocent party" death to the earth. It often requires two to tango. Who is the innocent party is often dependent on the eye of the beholder. "The innocent party" is a type of argument that has no basis in the Bible, but is only one grip to talk away the Bible. It may in certain cases be a real temptation for many.

In Matthew 19 reacts disciples with dismay at Jesus' strict views on remarriage. They believe then it must be better not to marry (19.10). Disciples reaction seems therefore to be expressed that they understood Jesus' answer to the Pharisees as an absolute no to a new marriage.

An abandoned spouse should adhere to the rule: either remain unmarried or be reconciled to her spouse. There are two valid reasons for divorce: adultery and that the non-Christian leaves his faithful spouse.

This means that anyone who divorces and marries another, fornicators, ie living in sin. Bible distinguishes between living in sin and fall into sin. One who lives in sin has accepted sin as a permanent phenomenon in their lives. God's forgiveness can not be granted until you have turned away from sin. This principle applies obviously all but living in sin disqualifies particularly from leading positions in the church.