Scripture says: 1 Pet. 5. 7 Casting all your care upon him; because he cares for you.
I've done that, and recommended!

Picture of a good father and mother, who live today! But writing about dead fathers, it is low. 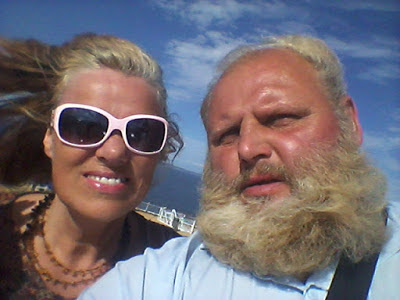 Some excerpts from "Code of Ethics".

1.2. Press has important functions such as information, debate and social criticism. The press is particularly responsible for allowing different views to be expressed.

1.3. The press shall protect the freedom of expression, press freedom and freedom of information. It can not give in to pressure from anyone that would prevent open debate, free flow of information and free access to sources. Agreements concerning exclusive event reporting shall not preclude independent news reporting.

2.3 open on underlying conditions that may be relevant to the public's perception of journalistic content.

3.7. The press has an obligation to render the meaning of the quotes from an interview. Direct quotes must be accurate.

4.1. Add a point of fairness and thoughtfulness in contents and presentation.

4.2. Make clear what is factual information and what is comment.

4.3. Respect a person's character and identity, privacy, race, nationality and belief. Be careful when using terms that can be stigmatizing. Draw attention to personal or private aspects if they are irrelevant.

4.4. Make sure that headlines, introductions and utannonseringer not go beyond what is coverage for the drug. It is good press conduct to reveal your source when information is obtained from other media.

4.5. Avoid presumption of guilt in crime and court reporting. Make it clear that the question of guilt of a suspect, reviewed, indicted or prosecuted first settled by an enforceable judgment. It is good press conduct to report the final decision in cases that have been reported earlier.

4.9. Be cautious when reporting on suicide and attempted suicide. Avoid reporting that is not necessary to fulfill the general need for information. Avoid description of methods or other conditions that can help trigger more suicides.

4.13. Erroneous information should be addressed and possibly to deplore as soon as possible.

4.14. Those exposed to strong accusations shall as far as possible have access to simultaneous refutation of factual information. Debates, criticism and dissemination of news must not be hampered by parties being unwilling to make comments or take part in the debate.

4.15. Those who have been subjected to attacks should as soon as possible have access to the same, unless the attack or criticism are part of an ongoing exchange of views. Any response should be within reasonable length, be pertinent to the case and have a decent shape. Similarly may be refused if the interested party, without reasonable cause, has rejected an offer of a contemporaneous rejoinder on the same question. Similarly and the debate should not be equipped with polemic editorial comment.
(End of quote).

In and out! The newspaper Our Country breaks here more things to write about the deceased. It
"Code of Ethics" is just something that they cover behind!

I know that all newspapers covering behind this. They say they can not write about an issue, then they should tread carefully. Shortly after they break all the rules, and writes, harasses and dritter out others just like it suits them.

There are those who have had a traumatic childhood, but to write about this in public. When the person is dead is so far behind it's possible to get. Even in North Korea and other dictatorships do they hardly so? But different country Norway goes mostly depends. Here is a macabre example of Debate on Our Country.

Father died in February 2012. Prior to the funeral, we discussed siblings what to say in church. Should we mention the evil, or pretend it had not happened?

There were not as many who said anything. I told about when my father himself had been a small and vulnerable boy in the face of adults who failed to set limits for themselves. About the hard facade he had built up. About his own fears, which had been there all along, but that he never dared to show.
Until he became demented. Then disappeared defenses. When he became the small, scared boy he had once been.
Kids go easily into pieces. Sometimes are they not mend again.
(End of quote).

Father is here dead, has never been in public. Here to the full name, time, place and the whole package. Here it is obvious people who are hurting, but at the same time. This does not belong in public, but in prayer, with one counselor or very best. Roosevelt entire misery of God, father is dead and can never repair the damage, but it may almighty God!