Narreapostel Jan Aage Torp claims that he has received light on what God's word says about divorce and marriage. It is that the so-called innocent party - who is not unfaithful, is allowed to marry again. This means that Torp at Barratt learned, as the other Pentecosts did not allow him to learn if he tried.But what about narrator Jan Aage Torp himself? He is now also reprinted, even though he or Ann Christin was unfaithful of what Torp himself claimed

Well, Torp is exempted from the demands, and he corrects wife Ann Christin. In other words, here it is so buzzing around this false apostle that even in his perplexity, he is capable of doing, and does not want to fill the demands he imposes on others.He himself is exempt from everything.Torp claims that I attack his new wife, something I never do. Not his old either for that matter, without letting them guilty of Torp's madness, ignorance, adultery, sin and immorality. They help to set things up for his hypocrisy and hardships to stand up for him.

This is the responsibility of all three of them. But I have only pointed out only how foolish apostle Jan Aage Torp has lived and lives.Here's an article I wrote about this a few years ago, which is just as current and no more today as they all three still go out for their sin!

No. 1244:
Njål Kristiansen argues the same as I have argued for a long time that the police should go in Jan Aage Torp closer at the seams!

I argue here in this article and other that Jan Aage Torp is obviously criminal!

Photo of the former couple in Jan Aage and Ann-Christin Torp, now Ann-Christin Düring Woll. It is obvious by the coarse care failure unearthed around this former couple's child welfare in an incomprehensible way not taken the kids here who have obviously suffer somewhat violently. That this should be an aftermath if there is to be any justice over these abandoned children. 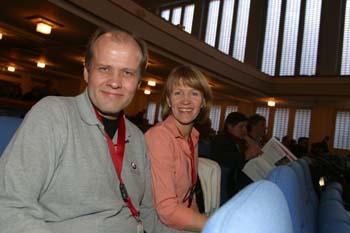 I already wrote yesterday concretely that these children and others should and must be rehabilitated by Jan Aage Torp, see here:

See here for what this wise Njål Kristiansen writes on Debate:

"The pastor mentioned in this thread has picked up round collar. I think it's appropriate if he voluntarily laid aside his "robe and collar." Pastor is no protected title, but it gives some associations for the match a pastor in that you think you meet a sane person it is possible to talk with on the basis of an extensive knowledge of human subjects.

I think the time has to be come to realize that in this context it is not so. The pastor is so charged that he can not have confidence in others than just formed. A logical consequence must be to lay off the outer signs and pick up suitable work elsewhere than in public.

A completely different matter is whether this should go unnoticed for law enforcement. Now there are two sources of the same coin which tells of a cruel childhood. It's too late with CPS, but these conditions are criminal? I think the police should look at these cases to assess whether the abuse of children is of such a nature that he should be prosecuted. Of particular significance is whether instruments of upbringing can be called harmful or destructive, and if it is taken too hard. The candidate himself would probably revel in getting the spotlight on himself in court. For Christian congregations and those that engage in parish work it may make sense to get a judicial review on what to do in an assembly and not, but especially to their own children in the home. There are enough case law on this already as may be applicable as a precedent for the reviews. For my own part, everything indicates that I have read that there are far in excess of what is appropriate to designate as parenting. Psychological violence appears to be a more natural name. "

In my eyes, Jan Aage Torp been a criminal long when he lied to Polti and was "believed" when he reviewed me for what's false accusations.
It was Jan Aage Torp's hatred for me and the Heavenly blog we wrote and spoke against that he was re-married that underlies it all!
But Torp managed to perform tricks and manipulate it all. And now it's not what I wrote, but the amount. That now is at least 99% of what is written by Jan Aage Torp written by his fictional review, it fails both he and the criminal Polti at Manglerud mentioning. Here we are obviously facing erkekjeltringer!

Now comes also child abuse as Njål Kristiansen so aptly call: "For my own part, everything indicates that I have read that there are far in excess of what is appropriate to designate as parenting. Psychological violence seems to be a more natural name! "

In other words, what I have argued all the time now come forward. When will Polti react? Or protect the Torp as they do with Norway's 2 biggest and worst net roll? Ansgar Braut and Torodd Fuglesteg? Here there is a law that makes such a poor job that it is inconceivable that it is possible in Norway in 2016?

That said, Jan Aage Torp is criminal, now it's more than me who begin to assert the same!

Boka to Edin Løvås of power people and psychopaths among Christians is more relevant than ever. Read it for free here: