No. 1365: Website Spotlight promotes and promotes occult sites, horoscopes and all that they can make money, here is the Balaam spirit that characterizes everything!

No. 1365:
Website Spotlight promotes and promotes occult sites, horoscopes and all that they can make money, here is the Balaam spirit that characterizes everything!

We also had this before at the Heavenly blog but removed it when sexannonser, horoscopes, psychic ladies and another came forward.

And it was to the ordinary reader of the Heavenly blog!

All the Searchlight and others come with is conspiracy theories.

Of course it has something for himself, but the detection rate is 50% or less. Those going out with ads it's very good to hit as much. But that credibility source this is zero!
When it comes to making money on everything and everyone, so it is Balaam's spirit and doctrine is afoot, as it is on the website Searchlight.

I've gotten up about horoscopes, fitness studio hours, cheap loans and other.
Pages that I never applied or looked at.

In other words, it may well be that it wants to capture people what they want. But in my case it rains I with less than 50% hits. In other words, this method of searching can be enough to give one if dipstick in some areas.

There are allikvel completely wrong to write and say that a person has been on it or the website. We can assume that the person has been there but surely? Under 50% accuracy!

Why Kjell Andersen should and must stop these indecent advertisements.
That's because it can and will lead people to fall!
But Kjell Andersen is what Balaam son of Beor who was fonder of money than he loved the Lord!

See here for some ads on the nefarious website Searchlight: 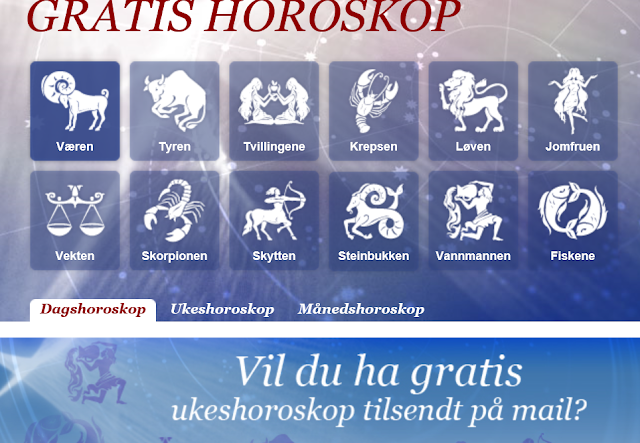 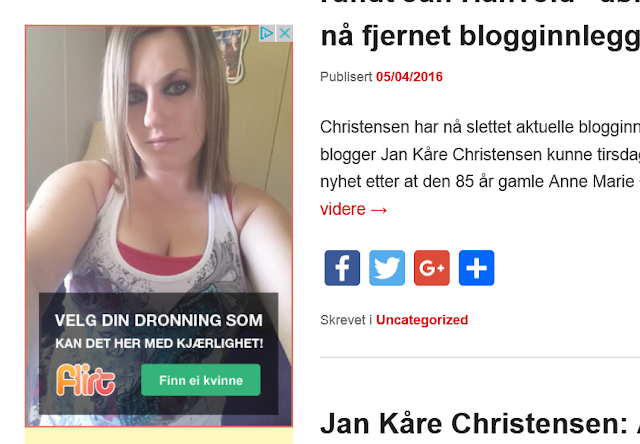 2. Tim. 3. 1. But this should know that in the last days it shall come perilous times. 2 For men shall be lovers of themselves, covetous, boastful, proud, blasphemers, disobedient to parents, unthankful, unholy, 3 unloving, unreliable, libelous, defamatory, immense, umilde, without love for the good, 4 treacherous, impetuous, opblåste, such as love their desires higher than God, 5 which has a form of godliness but denying its power - and these you shall turn thee from. 6 For among them are wondering themselves into the houses and capture women who are burdened with sins and operated by divers lusts and 7 always learning and never able to come to the knowledge of the truth. 8 As Jannes and Jambres stood against Moses, so is also the truth of the contrary, people who are depraved in their minds and uduelige in faith. 9 However, they should not have more success, for their folly will be obvious to all, as Hines and grew.

4. 1. I testify before God and Christ Jesus who will judge the living and the dead, and by his revelation and his kingdom: 2 Preach the word, be ready in season and out of season, reprove, rebuke, exhort with all longsuffering and doctrine! 3 For the time will come when they will not endure the sound doctrine, but after their own lusts take themselves teachers in droves, because the itching ears, 4 and they shall turn away their ears from the truth and turn to adventure. 5 But you be sober in all things, suffer evil, do an evangelist, complete your service!

For me it's clear that now the time being where a massive mistake! We see this in several ways. Just take here in Norway. Can easily mention many, many things but to shorten down to name a few that are among the false prophets (Matt. 24.11) and the spiritual direction that Jesus himself said is happening now right before Jesus returns.

1) The Norwegian State Church is about to be so gay friendly that one can not count it as a Christian church + all other pages on the turn God's word.

2) The Free Church movement in Norway has become so distant that they respond to nothing, just like a man who is asleep. Even when the female ruler \ Pastors \ elders are appointed, no longer responds. Where does this appear? I only know a few who respond and they will soon squeezed out, there are the false prophets that Jesus warned against accepting such a practice!

3) Vision Norway and Jan Hanvold. Abilities and manage a not to see that Jan Hanvold is a false prophet, as it is completely up in the day, how can one manage to expose and see the other false prophets who operate and who is not so bad and so obviously a fake prophet who he is? January Hanvold is a prototype of a false prophet. Lives in blatant sin when he is re-married as believers in which he had himself to blame for his many marriages break (this he said himself), live well on funds and curse those who oppose him, typical features of a false prophet!

4) When the priests in the Catholic and Lutheran church stands and tells people that they are God's children by getting a few splashes of water on the head, they are false ye would that lead people to destruction! It is only through faith in Jesus one is a child of God, and by accepting Jesus. He who believes has eternal life scripture says.

5) The entire Pentecostal \ Charismatic movement where becoming a "unity movement" are the false prophets Jesus warned against. This is of course a huge issue with many shades and sides. But faith in the Holy Spirit, visions, revelations, visions, positive for Israel, etc. None of this really saves and leads us further on the sky road. It is only faith in Jesus and follow Jesus in life and learning that lead. This makes the Pentecostal-charismatic movement a great disappointments that do not leave Jesus and the gospel in the city, but everything else that many times also belong to the gospel. Why is this deception so clever and in many ways difficult to reveal!

Just hope that more will wake up! Or is apostasy gone so far that the word of Jesus is about to come true? As he said:

Luke 18 8b And the Lord said, "But when the Son of Man comes, will he find faith on earth?"

The basic text is really the same as we find here in the OT:

2. Chron. 16. 9 For the Lord's eyes hazards around the earth, he saw his power to help those who wholeheartedly adhere to him.

There is a comparable word about GT is written in Hebrew and NT Greek. It's like the Lord says that he must look for to find the original, regular and genuine belief that the Apostles and early Christians had. The whole Christian world is more or less been led astray and have wandered from the faith that the Lord assumes.

I get hate mail, hate phones, etc. when I warned against this, even though I live in accordance with what I preach (God be the glory and thank you for it), preaching God's word. While the false prophets are defended, praised and receive financial support.

Am I a blasphemer?

Psalm 1 1. Blessed are those who follow Him advice and does not turn into the way of sinners or sit with scoffers.

The latest I heard was that I was a spotter when I say that Jan Hanvold is a false prophet and as a warning against him and Vision Norway, but a spotter!

But hey, I live as I preach, Hanvold live and preach directly against God's word. Who then is a spotter? The answer itself, I will not be surprised soon no longer. Think also of all those who support Hanvold and Vision Norway financially? It is really to keep alive the false prophets of the time, unbelievable and sad to see this.

I asked in the headline of the article: False prophets or rubs us the Lord's witnesses?

My experience is that the great masses of Christians are the majority more or less apathetic and not included. But they provided, all too many of them are so awfully wrong and really go Satan's errand when they think they are God's errands. This Jesus warned against.

Joh. e. 16 1. This I have said that ye be not led to a fall. 2 They will expel you from the synagogue. Yes, there comes a time when anyone who beats you to death, to believe that he performs a service for God. 3 It should do this because they know neither the Father or me. 4 This, I told you that when the time comes, remember that I said it.

When one thinks and believes that supporting the Lord testifies by boycotting, squeeze out and not stand up and defend the Lord's true witnesses, it is a truly come a long night. That's what I believe we have come away, both in Norway and elsewhere throughout the western world. Jesus words are coming true, and it happens just before our eyes as he said in Matthew 24 about the many false prophets would arise. Paul says the same number of places, not least in his letters to Timothy. Watchman, how far into the night we arrived, I ask myself really in this time? How long will this be able to go, before someone wakes up and says in the from or that the Lord takes the spoon into his own hands and let this go for coal? I do not know, but God knows, glory to his precious and holy name!

"But when the Son of Man comes, will he find faith on earth?" This word is in a context in which Jesus speaks of perseverance in prayer - and I think
that's what Jesus is talking about here. (I do not think we, without further ado, please take this word as a prophecy about the general belief level on earth until his Second Coming, as it often is interpreted as.) What is it, then Jesus would emphasize this, a little mysterious word ? As I understand it, Jesus will say this: It's always to pray, even though it often looks like this. And just as surely as the prayer has its time, then the prayer of the answer in his time! So, hold out until the end, you shall be saved and to experience the great blessing of being true to the end and be left having done all that the Lord goal for us all.
Further: It is Jesus, the Son of Man, coming with the answer, only you do not get tired and give up!
Faith is the "antenna" he looks for when he comes!
Turn not the antenna down early! Put the antenna up, so that God's power has its channel to you, and can create something new, when Jesus comes close!
Let the Son of Man find faith on earth (where you are) when he comes!

More Holiness Give Me

1. More holiness give me
more power in my spirit,
more patience, a complaint,
more free from the bondage of sin,
more faith in my Father,
more attention to his words,
more eager to serve,
more faithful on earth.

3. More purity give me,
more strength in the wants,
more free from all earthly,
more faith in your name,
more fit for the kingdom,
more sacrifice from me,
more purified and holy,
More, Savior, like thee.