No. 1368: Monetary preacher comes on NRK under focus, but unfortunately, that's just the tip of an iceberg they get illuminated by the false prophet Jan Hanvold!

No. 1368:
Monetary preacher comes on NRK under focus, but unfortunately, that's just the tip of an iceberg they get illuminated by the false prophet Jan Hanvold!

It is rather easily fooled when you give money to Hanvold & Co.
The man earned 3.4 million in salary last year.
Probably thought he deserved so of The collection? Anyway, it's that he is re-married as a believer and preacher glory theology that makes him a false prophet !!!!!!!!!!!! 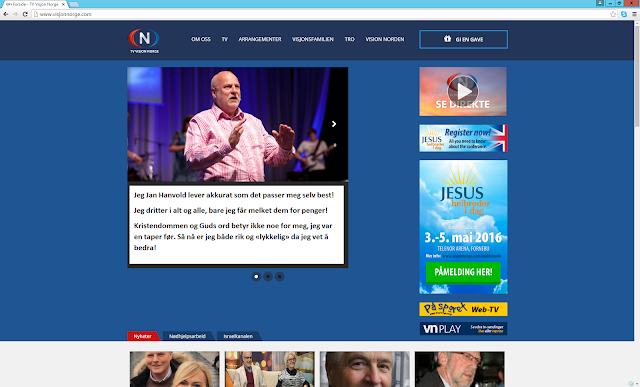 Focal Point is the largest editorial for investigative journalism. We make documentaries unacceptable circumstances and tells stories that concern you.

He offers salvation, healing and success. Whoever asks will receive. And whosoever shall give, you get even more. Jan Hanvold leader TV Vision Norway. The channel has in recent years enjoyed huge gift receipts from donors who are convinced that television pastor acting on behalf of God.

Tip of the iceberg!

What emerges in the program is only the tip of an iceberg of people like Jan Hanvold and Vision Norway has managed to fool out of gullible people!

I have never been concerned with whether Jan Kaare Hanvold has earned 1 or 10 Million.
The main focus has been his fault learn and that he is re-married several times as believers.
As God's Word says is committing adultery by remarrying after a divorce as a believer.

I know many horror stories of Jan Hanvold and Vision Norway.

Here's an article I've written about this before where Vision Norway urges to take out loans on credit cards to support them. Look here:

A couple we are, where are the parents of one of them given away also the entire inheritance and they do not hook in the wall. Now they are at retirement homes and children have stopped begging letters from Vision Norway. But this family is robbed of the fornicator and the false prophet Jan Hanvold and Vision Norway!

Here is the most famous article I have written about Jan Kaare Hanvold.

I've tried to have some focus on Hanvold, because if one does not see that he is a false prophet, then see a nor others like it but more covertly. If one fails to see that he is there, then I think one is so deceived and cheated, that one must seriously reconsider all their beliefs and viewpoint. To name a short 10 points for the record Skyler makes Hanvold, Pastor Jan Hanvold to a false prophet in agreement with Scripture:
1.) Hanvold is divorced and lives when adultery scripture says. Luke 16 18 Whosoever shall put away his wife and marries another woman commits adultery, and whoever marries a woman who is divorced from her husband commits adultery.

2.) Hanvold himself says he is a false prophet, then we believe his own words:
A prophet is a person or messenger who is considered to communicate and manifest a religious message from God.
Jan Hanvold said yourself, when he prophesied on Vision Norway that Mrs. Clinton was the next president, that demonstrated not come true, then I am a false prophet, something he had absolutely right.
Beloved, believe not every spirit! Try the spirits whether they are of God; For it is undergone many false prophets into the world.
Many false prophets will appear and deceive many.
For false Christs and false prophets will appear and perform great signs and wonders, if possible, to lead even the elect.

3.) His money begging is manipulative and unbiblical. He promises on behalf of God, which no one has the authority and power to do.

5.) He chimney on credulous and deluded people's generosity device frightening that he scoops million on this, as he also ample pillows into his own pocket.

6.) Condemning others and rebuke others but even in sin and engaged in unbiblical teachings. This is contrary to Jesus' Sermon on the Mount and God's words. It is only when we have turned our lives for us to be bold to expose and discipline others. Here is the Bible really radical, read for yourself! Matt. 5. 19 Therefore, whoever breaks one of these least commandments, and shall teach men so, shall be called least in the kingdom of heaven; but whoever practices and teaches these commands will be called great in the kingdom of heaven. 20 For I tell you that unless your righteousness surpasses that of the scribes and Pharisees, ye shall in no case enter into the kingdom of heaven.

7.) Hanvold is a karismatiker and religious movement man. Opens up for him, you will also get these ministers and these teachings on "bandwagon". This is really going to ledertog with Satan and the evil spirits, which I would strongly warn against. 2 Cor. 6. 14 Pull not be yoked together with unbelievers For what partnership have righteousness and iniquity? Or what fellowship has light with darkness? 15 How can Christ and Belial agree? What unites a believer and an unbeliever? 16 How can the temple of God and idols reconciled? For we are the living temple of God. God hath said,
I will live and move among them,
I will be their God,
and they shall be my people.
17 Thus saith the Lord:
To depart from them,
and separate yourselves from them,
touch not the unclean thing;
Then I will receive you,
18 I shall be their father,
and ye shall be my sons and daughters,
says the Lord Almighty.
7. 1. Beloved, when we have these promises, let us cleanse ourselves of every defilement of body and soul, and finish our sanctification in the fear of God.

8.) This point up to a very difficult point to address this man has acquired even a new wife and child, but it must still be said in from when he is a public person and that promote themselves and their business that few and no other. When have standing for what he says and fornicators, so will have drag everyone else with him in the same sentence as all other false prophets at all times have done. First his own new family, their employees and anyone who pops up on his channel that David Ostby, Emanuel Minos, Lise Karlsen, Arvid Bentsen, Vebjørn SELBAK and anyone else who knowingly sets up with him.
2. Joh. b. 9 Whoever does not adhere to the teachings of Christ, but goes beyond it, does not have communion with God. Whoever sticks to teaching, he has fellowship with the Father and the Son. 10 If anyone comes to you and does not bring this teaching, so do not receive him into your homes, and greet him not to attend. 11 For he who greets him, is partaker in his evil deeds.

9.) A very important reason to warn against Hanvold ia King David was judged so strictly by God was that when he did, he gave the enemy or gentile a reason to curse God. This will not the Lord make his acquaintance by. Here I could have taken several and many examples but I mention just one example what Hegner and Capital wrote about Hanvold. For God so does our testimony above the dying and lose the world much. See here what Kapital wrote: Reverend Jan Hanvold with poor people who sponsor
Foundation VBC, with Jan Hanvold the helm, took six of the six collected emergencies million to property in 2003. Now they have just singed by 6.5 million on new facilities for TV Vision Norway.

10.) The last point up to is also very important that I want to record. When Hanvold and Vision Norway gets as much space and so much funding they will take up very large space that comes at the expense of others. Thus, we find in God's word over and over again that the Lord would have first place and not idols. And the Lord wanted His true prophets should have first place, not the flapping prophet. This is a pattern that manifests itself. By all means, time and effort many sincere, gullible and naive people spend on him. As they should and could have used other, are then bypassed and they will not be rewarded for it by God of Heaven, but rather judgment and lose his reward. If they are saved.

2. Chron. 20. 20 The morning after they broke up early and went out to Tekoa wilderness. With that as they went forth, Jehoshaphat stood and said, "Listen to me, you men of Judah and Jerusalem! Believe in the Lord your God, and ye shall stand! Believe his prophets, so shall you have luck with you! "

Now I have not taken the fruits of his work and "service". Barely each stop her judgment, but so I could have continued, but this should be more than enough for that one should take 100% distance toward him and Vision Norway!