God revealed himself at the mercy seat because there was sin purged and removed the old covenant, but in the new covenant through Jesus, it is all happening, and sin will be forgiven and removed 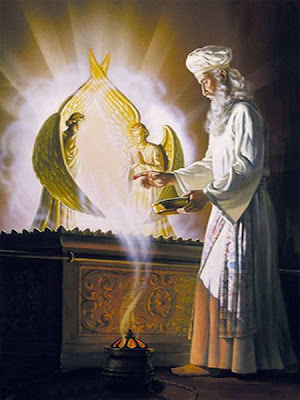 2. Kor. 4. 3 But even if our gospel is veiled, it is veiled among those who are perishing, 4 in whom the god of this world has blinded the unbelievers minds, lest the light of the gospel of the glory of Christ, who is God's image, not to shine for them.

Before I got saved I was not a loser like most people who are saved are, especially in the Free Church communities. I did me much good in this world and I smiled and the world smiled at me. But I needed salvation just as much as addicts and alcoholics. But before I was saved as "cultivated" I this world, and enjoyed it. But after I was saved and born again, asked all different. Why? Is it not to come to Jesus to make it good? Or is there something more and more important? Yes, that's it. Before being saved, lives an on lies even if one succeeds in this world. And anyway, in the church of God, so is overcome when one has accepted Jesus and been born again into a living hope through the resurrection of Jesus Christ from the dead.

Satan's main weapon is a lie, he operates in lies all the time. It began in the Garden of Eden and quoted some of what God had said, adding anything themselves. Has God really said? Etc..

It is incredibly difficult to reach people who think they are right, but still have errors. Here I can give many examples. As such many charismatics as Jan Hanvold, Ulf Ekman and others stand up for Israel, it makes them righteous and holy before God? I talked with a sister about this, and she had to explain earnestly and deeply about this before she could see that even such as these false prophets here could use this as a cover for his shady business.

Israel's friends are often a good idea even

I know that I will step on many and this will be misunderstood. But to stand up for Israel is commendable, right and good. But that in itself saves not and we have that the church is actually a more important task of a defense of Israel. It is to preach the gospel and make sure that we are living even after word of God. Then, when it is in place, so it is perfectly in harmony with God's will to stand up for Israel.

When I grew up in Karmøy on the west coast, I could not get enough of listening to the then-young preacher Arvid Bentsen, but where he stands today? He has sold his soul to say to get in everywhere, empty at the fake prophet January Hanvold and Vision Norway set him up, he does not know that Hanvold is an adulterer? He is not a believer, but a hypocrite of the worst sort, divorced and married three times and he himself is to blame for all their own divorces. Setting up of such is to remain a hoax!

But the world demonizes Israel all the time, and it rightly!

Here in Norway, particularly socialists and some others who rubs Israel, and it is the strangest empty phrases, it is 99% lies and 1% truth, especially when we see it all in light of the fact that it is Arabs who are to blame in this conflict in the Middle East. In many ways, I would say that Israel is innocent and being pushed into a corner and not straight. The little land they have, it is completely unreasonable that they should have and get a bit more without difficulty if the world community had wanted it. But what do they want? That there should be a conflict and that Israel should be held down and always be responsible for something that the world community spearheaded by the UN has created the conflict. There is enough space in the Middle East to all, and God says in his own words how and who should have the various residential areas. But because the world's nations will not bow to the Lord God, nor obey the god of this world is Satan. So they will be deceived all the time, until Jesus comes again and people will obey him, and he reveals the lie.

Lying reigns in the church of God as much as in the world but more subtle!

There are those who think that getting into the church is a sanctuary, more errors can not take, especially in this time. The entire congregation is so true of lies, half truths, power and control the spirits who are not passing to ask if he can get into the head of the church, ruler and lord himself. Jesus Christ.

John. Obvious. 3. 20 Behold, I stand at the door and knock, if any man hear my voice and opens the door, I will come in to him and will sup with him, and he with me.

Jesus himself is trying to get the day to the church in word, but just like Adam and Eve were surrounded by a fig leaf is the church surrounded by the old man so that the Lord Jesus never get its full path and will, tragically! It is tragic that the church believes that gjengiftede people may be pastors and teachers when the scripture says that it may not. And when a male inserts Pastors and elders, it is an open to God's word as scripture teaches clearly.
1. Tim. 2. 12 but I do not permit a woman to be a teacher or to be the man, sir, she will be in silence.
And when a claim that the Godhead consists of three equal deities, it is also a lie because scripture says that only the Father is the only true God (John E. 17 3).
And when even today hold on to the medieval doctrine that the Catholic church bring about an eternal fiery hell, it is also a lie, as the Scriptures teach that the man is not eternal life, so too will the life does not last forever, it is only through faith in Jesus that will live forever, all others are spared the fire.

Lying is the opposite of the truth

John. e 8 32 and ye shall know the truth and the truth shall make you free. 36 So if the Son makes you, then be free indeed.

We began this article with the Corinthians Second, that the god of this world Satan has blinded the unbelievers minds. How will the fight be for the most part? In our minds, in terms of both the saved and not saved, therefore, both the written and spoken word such power. Controls a media world, it is said that control a world. Let us take two passages that deal with this.

Eph. 2. 3, among which also we all walked sometime in our flesh desires, as we did the flesh and the mind's will, and we were by nature children of wrath even as others.
2. Kor. 10. 3 For though we may walk in the flesh, so contrary we are not, however, the carnal way; 4 for our stridsvåben are not carnal, but mighty before God to overthrow the fortress works, 5 as we overthrow imaginations and every ridge that rise up against the knowledge of God, and take every thought captive to the obedience of Christ, 6 and are ready to punish all disobedience, once your obedience is perfected.

We see here that the world's children followed the flesh of thought will, which they "saved" makes roughly a same extent today as the world's people, therefore, no difference in the world and the church.

The complaints 1 10 enemy laid hands on all her precious things, for she saw pagan nations enter her sanctuary, those you had forbidden to enter in your church.

In ancient Israel there was more physical as the enemy had taken the precious thing in the temple in Jerusalem because of apostasy in the church of God, but today this is spiritual and who controls our minds. Therefore, scripture says that we should take every thought captive to the obedience received Christ. Again and again as we meet a conflict that is when it comes to our mind and thought, why scripture says that is where our renewal to take place.

The renewal and transformation takes place primarily in our inner man, and as a result of this, we also manufacture our bodies before God that we should serve him in truth.

We know that Satan he operates, but how? He puts down the thoughts and people through our inner nature so get this develop, mature, and since it is a fact of sin. There is also James says in his letter;
1. 14 But every man is tempted when he is drawn and enticed by his own desire, 15 afterward, when desire has conceived, gives birth to sin, but when sin has been fully matured, brings forth death.

So it is doing God's will, therefore, Bible reading and preaching from God's word so important and necessary. It is through God's word we can know God's will, never outside of God's word.

1. Sam. 3. 21 And the Lord continued to let him see in Shiloh: for the LORD revealed himself to Samuel in Shiloh by the word of the Lord.

This is a particularly good story from the Old Testament and it's written that the Lord continued to reveal himself through his own words, better and more glorious than that, it does not stay to be!