1. Kor. 10. 11 This happened to them as exemplary, but it is written down for us, to whom in recent times has come.

The first Pentecostal preachers as TB Barratt and Lewi Pethrus were truly giants and princes of God. Today's Pentecostal leaders do not know the difference between right and left of the spiritual terrain, so the result is then! 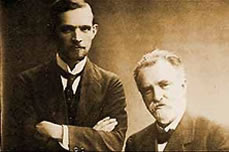 About Issachar children are there in the 1st Chronicles 12 32 that they "understood the times, so they knew what Israel should do". In the next verse it says about the violation of Zebulun able men, that they were "an army determined to help." Thus shall it be also with us. We need to understand us at what time we live in and what position we are in. In order to be combat capable and that God gets us out of his potential and we want to be a blessing, indeed a great blessing!
We will bear fruit, fruit that endures.

John 3:16 p.m. I has not chosen me, but I chose you, and I have set you to go and bear fruit, fruit that lasts, that the Father will give you everything you ask him in my name.

If we consider the last century as a whole, the Pentecostal revival - the belief that God listens, responds and makes below that of the apostle's days, which accounted for Pentecost revival. This century's most pronounced and largest åndebårne revival and progress of the gospel. This was positive, but out of this so they too have mørketes, most forføriske and in many ways the most sickening shades come. This Jesus said would also happen to such a glorious revival.

31 Another parable set he before them, saying, The kingdom of heaven is like a mustard seed which a man took and sowed in his field, 32 it is smaller than all seeds: but when it grows, it is greater than all herbs, and becomes to a tree, so the birds come and nest in its branches. 33 Another parable he told them: The kingdom of heaven is like leaven which a woman took and hid in three measures of meal, until it was all leavened.

This is what happens, revival starts as a work of God and the end result is that the demos that birds are a picture, get a foothold and a free rein in the end. Was not the revival of God? Yes, but our flesh is weak, infected, corrupt and evil. It turns out time and time again that people fail and fall, no matter how good and wonderful conditions are!

This is from the book, the Bible prophecies of the major John Walvoord:

The parable of the mustard seed
(Matthew 13.31-32, St. Mark's from 4.30 to 32)
The parable of the mustard seed that illustrates another aspect of the kingdom of heaven. There will be a rapid and substantial growth. The plant described here, hundreds of thin seeds, each of which is able to produce a plant. Jesus said in this connection: "The kingdom of heaven is like a mustard seed which a man took and sowed in his field. It is the smallest of all seeds, but when it grows up, it is larger than the garden plants and becomes a tree, so that the birds of the air come and nest in its branches "(Matt. 13.31 to 32).
The church had, like the mustard seed, a modest beginning. Jesus and his disciples may outwardly appear to be a small and insignificant beginnings of a major undertaking. But in the centuries that have passed, the professing church has become a gigantic institution with millions of members. Some have pointed out that the mustard seed is the smallest of all seeds. They say that as orchid seeds have even less. But Christ using the comparative form when he speaks of the tiny seed. He says it is "smaller" than others (Greek: mikroteron). Although there are less seeds elsewhere in the world, the mustard seed the smallest of all seeds that were planted in the Holy Land. The argument that Christ was inaccurate, therefore no reason.
It is significant that in Mark 4.30-32 is the same parable relating to the kingdom of God. Most interpreters regard the kingdom of heaven as the same as the kingdom of God and explains the connection from the fact that Matthew, like many other Jews did not like to use the word God and the heavens used instead. But in reality refers to the kingdom of God Matthew several times. In Matthew's Gospel, there seems to be a difference in the use of the "kingdom of heaven," that it refers to the confession area, as opposed to "the kingdom of God," which always refers to those who are saved, or in the case of angels, saints. What is true about the confession area, is also true of those who are saved, since both the professing church and the true Church has grown tremendously after a small beginning. The same parable can be used to illustrate both. One should also note that Jesus said that "birds of the air come and nest in its branches" (Mat 13.32). This indicates that the church's rapid growth is due to those who are not even professing believers. As in the case of the parable of the sower and the parable of the tares of the field, the imperfection, a prominent feature of this era, which is in contrast to postmillianistenes opinion that these parables draw a picture of the church's growing spiritual triumph. At the church, both in terms of its confessors, and the true believers, has taken a large part of the world, is true, but that it has overcome the unbelievers and the world as a whole, is not true.
The parable of the leaven
(Matthew 13.33; Luke 13.20-21)
Christ also used leaven as an illustration when he spoke about this era in his parables: "The kingdom of heaven is like leaven which a woman hid in three measures of meal, everything was imbued" (Matt 13.33). It was common practice in the Middle East that took some of the dough that was previously fermented and had the new dough, so that fermentation was spreading. Here, Christ used this as an illustration of the heavenly kingdom of nature. Most interpreters, influenced by postmillianismen, a view that dominated so strongly in the latter part of the nineteenth century and early part of the twentieth century, believes that the leaven of the gospel is being spread in the world. But the idea that the leaven is the Gospel, is a captivating misinterpretation, as the Scripture always in connection with the leaven otherwise refers to something that is contrary to holiness. It represents evil.
In the Old Testament spoke the unleavened bread of God's holiness, and one should beware of having leaven in it. But when it comes to the professing church (Luke 13.21), the yeast mixed in, as the professing church contains an element of evil. Just as leaven the dough to swell and thus make it bigger than it really is, without adding value, it is a false teacher. It was the Pharisees setting, Sadducees and Herodians unbelieving secularism. All this served to inflate the religion, while in reality it was all about evil powers (Matt. 16.6 to 12; Mark 8.14 to 21). Also in the letters signifying evil leaven (1 Cor 5.6 to 8, Gal 5.7 to 10). The fact that there is no harm in both the true church and in the professing church, is clearly expressed in Scripture and provides the basis for many admonitions and reprimands. It is therefore far better to interpret the leaven that this evil element in the professing church. The evil has permeated the church. It is not the gospel that has permeated the world. A large part of our world have not even heard the gospel. At this point in Jesus' preaching of the parables, and before he explained the secret of the parable of the tares (Matt. 13.36-43) turned the attention back to the fact that he spoke in parables: "All these things Jesus spoke to the crowds in parables, and without parable spake he not unto them, that it might be fulfilled which was spoken by the prophet: I will open my mouth in parables, I will utter what has been hidden from the world's foundation "(verses 34-35). It cites Matthew Psalm 78.2. (End of quote).

What does and does this teach us?

Begun is not finished. We are all in danger, no matter how glorious, great and exceeding what we have learned is, to fall and fail! There are no guarantees until we are at home, hold off just a little time, soon we are at home, then it all goes off!
Quickly towards the target as it goes, then all games past, it is just holding out now a little time before we leave the bone countries!

Why did the Pentecostal movement? Or Pentecostal revival? Is there anything we can learn and not make the same mistake? Could it have been avoided or "may" happen?
I have much more to write about this subject and come back with more. Got a question? I wonder more? Praise or criticism? Blog of the road or submit questions and subsequent answers.