A few words about what I \ we have plans and prospects!

Jeremiah 29 11 For I know the thoughts I think toward you, says the Lord, plans and thoughts of evil, to give you a future and a hope. 13 and ye shall seek me, and you shall find me when you seek me with all your heart.

Torrevieja down to the harbor 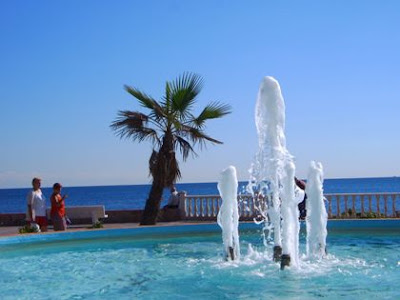 I write for the most purely spiritual substance, but would sometimes also write out something I did, among others. A telling about me and my family. I am lovely and well-married and has three I've written about before.

Right now we keep on building houses on top of Hellerud Tveita that we expect to move into in August \ September. We build with utleiel. and down two floors to us and we will have a roof that will be exciting. The first time we build houses with roof terrace of this is our third house we build and last.

Vacation Plans
My wife and I have some vacation plans, as we have booked one week in May trip to Rome and we look forward to. It will be exciting to go there and I would like to visit the place that the apostle Paul died and there are some who know how to get yours as I am \ we are pleased tip.

This is what I have of information about his death as I lay out here, he was sentenced to death by the Emperor Nero (about the year 64 AD.) And after nine months under great suffering in the Mamertinske prison, he was executed. As a Roman citizen, he was (unlike Peter) was beheaded with a sword. It happened on the road to Ostia, after the surrender of the place now called Tre Fontane, because where his severed head hit the ground three times, ran up the three sources. There was later the church of San Paolo, all of Tre Fontane was built. His body was buried in the nearby villa of the noble Roman woman Lucina. Over the grave Constantine the Great built a small church emperors Valentinian II and Theodosius from 386 replaced by the femskipede Basilica of Saint Paul outside the Walls (San Paolo fuori le mura), which is Rome's second largest church. Today's church is an exact replica was rebuilt after a fire in 1823. We look forward to Rome and Italy!

So expect Spain and Torrevieja

My mother has shed in Spain for 15 years and have a nice apartment in Torrevieja, we travel 14 days a month. late July \ August. It is delicious with the heat and I feel like I'm coming home when I come to the Mediterranean. Loves sun, warmth and bathing and everything else in the South, unfortunately they are now struggling financially. While in Norway is so booming and one of the reasons for that is that we are not in the EU!

Otherwise, there is plenty to do

I write on this blog, and know that now I write somewhat less forward when now there are so many good topics that can be read. Just go back and look from the week. 1 and beyond. Here are the first 3 topics we wrote about on the blog:

1) week. 1 Some teach that there will be a nationwide revival over Norway, which we have not seen before.
2) Nr. 2 In summer, Benny Hinn claimed that Jesus had the Father's blood and not Mary's blood. Is this true or is it unbiblical and objectionable?
3) Nr. 7 You like if Jimmy Swaggart very well? He believes in the Trinity and not live the way he should and would, or do I wrong?

Here are some excerpts and search back and find much good.

What many do not understand at Smyrna Oslo that there is jealousy and other things because we did not have as much progress as might be desired. Norway is in many ways Janteloven "homeland" and then claiming that you see things fail, and in accordance with God's word that few others do, of course, to create difficulties in the Law of Jante "homeland", but I take the chance.
David did the same, we read:

There is a similar community as far as I know which one is truly preaching the whole counsel of God for salvation and nothing is held back, you are welcome in Smyrna Oslo. I have become wiser and wiser than all my teachings, David said, and I think I can say the same thing! Do not know if someone who has so much insight into God's word, but nothing is better if it's even more. I wish that all the Lord's people were prophets Moses, so will I say.

That I'm working on and have taken the first two chapters of John. Gospel. And I do not write so much here on the blog, it's because I write the Bible commentary. Pray for the project and support it financially also, see here:
Account number of the Post Office: 0535 06 05 845

Otherwise, everything just prosperity, I coach a fixed three times a week to swim 1.5 to 2000 m every Monday, Wednesday and Friday followed by a sauna. His wife goes to the gym. We have prayer meeting every Tuesday. 19.00 and regular meeting every Sunday. 18.00 and all are warmly welcome in the name of Jesus. I drive bus now Holmlia but will soon be safe to start driving in the city again when we move there if all goes according to plan, pray for this. His wife's secretions on Nydalen VGS and thrive with it and also work a little item next to supplement his income. We have busy days, but God is good and everything is just prosperity friends!

We are a common Christian church but when most other churches do not want anything to do with us as we do not allow divorce and remarriage of a low shoe, believe that the Bible that man is immortal because it is only the Father who is immortal and the Trinity is 100% unbiblical being held without a past, it can not know or we anything.
Lagt inn av Jan Kåre Christensen kl. 01:34