Jan Hanvold are among the false prophets that Jesus opptaler in Matt. 24. 11 and those who support him are about to let his evil spiritual power seats come across them so people scripture says, a turning away! 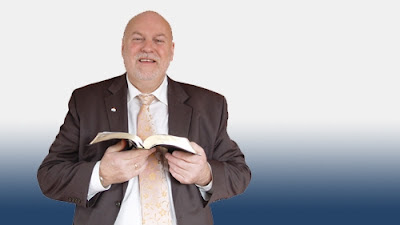 Public television prophets in Norway and elsewhere in the world acting as a mega thugs what morals and fundraising concerns. Here in Norway, the false prophet television have removed socialism so he can get more money from deceived and gullible who have been tricked roll around him and the evil spiritual powers that go with him!

Now the pastor appeared on the message board on the day and the last big hit was the Socialists that he would abolish. Here he writes himself: "All the Norwegian people, should understand that Herland put your finger on the dark side of the Norwegian demo dictatorship where the elite come down heads of the people what to think, believe and think. Long enough have the Socialists controlled and brainwashed the people, what is politically correct. So we get rid of the last big hit, socialism. "

Why write this as he does? In order for Christians to get it lighter and more money to spend and give him even more. How can anyone support such a manipulative preacher who is speaking out about their intimate desires and their needs in this respect and pengegnåling that never ends?

How can one that Emanuel Minos support this, he is in the process need to be "the most dangerous man" within the Christian ranks?

What I find so silenced and the bad is that almost all Christian people, leaders who have confidence is good for this mega-villain and the false prophet, that I warn strongly against and Minos and all peers have by their conduct and cowardice turned into Balaam's path and is about to get the same verdict as Hanvold. Not only that, but those who follow Minos and Co.. They come under the same judgment as Minos and Co.. is below.

Matt. 15. 14 Let them go! they are blind guides, but if the blind lead the blind, both shall fall into the ditch.

Hanvold is a man without scruples, conscience and is similar in Jan Aage Torp.

Scripture says we will not even eat together with such adulterers and power of people. Why profiles Our Land, Day and many other Christian newspapers such? It is to be Satan's errand, they know not what they're doing.

1. Kor. 5. but what I wrote to you was that I should not have sexual relations with anyone called a brother and an adulterer or an idolater, or havesyk or a railer or a drunkard, or robber, so I do not even eat with him.

We as believers to cast out these "preachers" who are not!

We can come to Jesus with everything, but we shall be changed. Not sinning grace, making January Aage Torp, Jan Hanvold and all others who live as gjengiftede. Preachers of the Word of God is in a very special position and has an overall responsibility in their lives, not least as a model for the sheep. Preachers and others who are in senior positions as a Christian should immediately resign from this office when a diminish and obscure, and leads to confusion and open up the powers of darkness by holding up in their sin. According to scripture has no right to be a preacher who re-married after divorce. So it is just. And we have to deal with otherwise, we are disobedient and rebellious children of God. We go from being children of light into darkness children.
Is a re-marriage after divorce as believers, what shall I do? You have to make up, not only confess sin. Then you can not live together with the "new" spouse, as a living in adultery. Hanvold is an example of the opposite of what Scripture allows, he has allowed his passions to govern hemningsfritt, now lives with wife No. 3, and nag constantly about raising money and more money and abusing his power to his followers. He is the Word of God says is a false prophet. Jesus' words is to go not to sin no more, here are a law to the overture, with other leaders' blessing ', this is Protestantism at its very worst! Even Catholics not hold on like this. The laws of their states that if one fails to stay within Chastity, get a not allowed to be a priest. Now, one must also include in this context that within the Catholic system is unbiblical in relation to marriage with a force that one should live as a single. God says he created the woman to the man, for it was not good for man to be alone as it is written.

When one points out sin among us believers as against a resistance and hardness.

My experience is that these false prophets of the time hiding under concepts such as forgiveness, love, grace, and more. These words are used to their own destruction. We must never forget that all the promises of God are related conditions. The Hanvold, Minos, Ostby and co are doing, represents arrogance and lack of true spiritual boundaries! It's not just children who need to have boundaries in his life through upbringing, it is something that follows us throughout our lives in all walks of life. Not least in the Christian life, we need more and be disciplined, and exhorted and reminded of the right path to walk on.

Driving - it applies in all areas of life

This is from my commentaries letters Titus 2 11 For the grace of God has appeared to give salvation to all people.
Here comes the big main biblical truth, the middle way Paul teaches Titus. Just think, God has not forgotten us. We are all included in God's salvation and no one is excluded. If one is white, yellow, red, black or mulatto as God loves us just as much and salvation is just as rich and necessary for everyone.
12 And his mercy teaches us to tell us ungodliness and worldly lusts and to live self-controlled, upright and godly lives in this present age,
What saves us? What keeps us as believers? How to get the Christian life to go on shining? If we follow the law, or strive to the utmost?
The answer is the same at all, it is grace that saves us, causes us to live as true believers and some day it should take us home.
We are only able to live as God's grace through Jesus Christ. It causes us to live, in self-discipline, upright and godly lives in this present age. (End of quote).

Traffic Rules and Regulations of God is given us to regulate and that we can live and work both yourself and with others. God's decrees are not against us, but for us. When one points out that these false Christians, for that is what they are, have a listen to all sorts of things, but that was before, and so it is today. They act like some spoiled kids who really are impossible to deal with, these kids hell!
Jesus hates the current Protestant Christianity that has no morals, integrity and self-knowledge.

Jesus said again and again that he would have morality and discipleship of those who believed in him. The morality he requires and wants, it is not found in the new re-forms, dreams and revelation, but in God's word and in particular in the New Testament! Room, 6:15 What then? shall we sin because we are not under law but under grace? Far from that! 16 do you not know that when I offer you up for some as servants to obedience, then you are also the servants of the one in which sounds, whether of sin to death or in obedience to righteousness? 17 But thanks be to God that I probably have been the servants of sin, but now the heart has been obedient to the lessons form that I have been given over to! 18 But as I have been freed from sin, is the entry into service of justice.

Begin to think for themselves and speak out

God wants all people to know him, so learn to follow your own conscience and conviction, if this is true with God's word or arrangement. I know that many such looks at Vision Norway will have a guilty conscience and gives to the devilish channel. The support of Satan and not God. Tek through this dear friend before you send your next money there, God bless you and yours. Try rather to support the Smyrna Oslo and my service, you will see that it has greater significance than you yourself recognize, God is just good and faithful no matter, I'm happy! He has the full control, but he will also give more of himself to us so that we can and will experience His glory and blessing!

You will not be sorry for thee for his sake

3. Genesis 19 17 You shall not hate your brother in your heart, but you shall reprove your neighbor, lest you be sorry for yourself for him.

All those who support these people as Jan Aage Torp, Jan Hanvold and all others living in sin and want to be preachers, they will experience to feel sorry for themselves and the same judgment. They are involved in everything that he stands for. Support also up about the preachers who live clean and obey God's word even if others think they are legalistic, God bless you to do God's will in conjunction with all others!

2. John. 10 If anyone comes to you and not bring this doctrine, then do not take him into your house, and bid him welcome! 11 for the one who offers him welcome, being an accomplice with him in his evil deeds.

Think about it, did not support those who do not live according to God's word and who speaks the word of God right!

The "old" has not always right!

Norwegians and a lot of people are otherwise so set that there are always others who will settle for them, think for them and be their safety. But every man is responsible for themselves. Each one must examine themselves and ask themselves about the way one travels on, like David, we must ask, if I see God walking in the way of perdition lead me in the way everlasting.