No. 1765: The mighty opposition to President Donald Trump looks more and more like it is anti-Christian, evil and demonic when Trump opposes any form of globalism and dares to speak out what he believes and stands for!

No. 1765:
The mighty opposition to President Donald Trump looks more and more like it is anti-Christian, evil and demonic when Trump opposes any form of globalism and dares to speak out what he believes and stands for!

Picture of Hillary Clinton where she's really loose against anyone who disagrees with her, the lady unfortunately only has one agenda, "mingle" her own cake to get herself up and down.
The Norwegian state has also paid up to half a billion to her and her husband.
About directly into the account camouflaged behind the Clinton Foundation, with money supposedly going to aid. Talk about being corrupt, both the Norwegian state and the couple Bill and Hillary Clinton. Think, create a foundation and get half a billion of just Norway + everyone else who has encountered this. 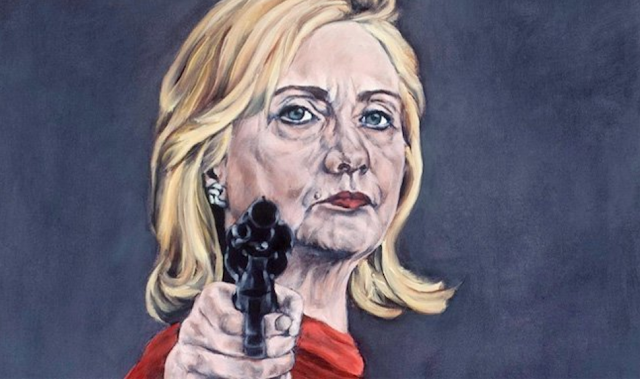 I'm far from agreeing with Donald Trump in all things, but anyway.
The great resistance, heat and lies he goes through is not just because Trump is "special". But because he stands for something and what he stands for is in many ways founded on biblical and healthy principles.
While his ardent opponent of Presidential office in the United States was really shaking the opposite as great for what I would call universalism which is directly dangerous and anti-Christian.
It is God who created the national states. Therefore, this is actually what is happening today in the United States, a spiritual battle. There Trump in spite of all his shortcomings, faults and shortcomings was and is the best man the United States may have for not the United States to go the doll already now.
They want to go the doll, but with Trump as President, in many ways this is "exposed". With Hillary Clinton as President, it had happened far faster!

Final Comment:
It's not that I get so much involved in this, but after all, Donald Trump was a much better choice than Hillary Clinton's.
Not least in retrospect when I have seen what they have attacked Donald Trump for.
He wants to promote the United States, and everything the United States stands for. It's really good, so it should be. That one primarily focuses on one's own manpower, one's own skill and protects one's own country's interests. God has set boundaries between countries, they must and should we respect, something Trump does.

Acts 17. 24 God, who made the world and all that is in it, he who is Lord of heaven and earth, does not dwell in temples made with hands; 25 Neither is he served by human hands, as though he needed anything; he himself gives all life and breath and all things; 26 And he caused all nations to dwell in one blood throughout all the world, and set them times and boundaries between their dwellings; 27 that they might seek God, though they could feel and find him, though he was not far from any man. the only one of us.

Yes, it clearly says the following "set them fixed times and boundaries between their dwellings, that they might seek God, though they might feel and find him, even though he is not far from any of us."

Ezekiel 39. 6 And I will send fire upon Magog, and upon them that dwell safely in the isles, and shall know that I am the Lord.

This is imagery, written 2600 years ago. But that this applies above all to the US and the western world that "fire" in the form of bombs - rather than atomic bombs - that will hit the US and us in the western world in connection with the Gog war, I see as quite safe and what among other things. the prophet Ezekiel depicts.
Also refers to my Bible commentaries on John's Revelation. Read them yourself here:
http://janchristensen.net/bibelkommentar-hoved.php?side=bibelkommentarer-Johannes-aapenbaring
Lagt inn av Jan Kåre Christensen kl. 13:30