As believers, we must see "big" on it all and not believe in a just world, yet. Why?
The God of this world is not the God of Israel, but Satan.
Then we cannot expect everything to be "taken care of" before Jesus comes and takes power. Until then, our task is to be light and salt in this world.
But at the same time, the Apostle Paul says that "everything belongs to us," then he meant everything.

1 Cor. 3. 21 So no one praises people! for all things belong to you, 22 whether it be Paul or Apollos or Cephas, whether it be the world or life or death, whether it is now or that which is to come - everything belongs to you, 23 but you belong to Christ , and Christ belongs to God.
We don't envy any people for anything, soon it is ours. They only have it "borrowed", it belongs to us as we are the heirs of God and Christ co-heirs.
Picture of a beautiful home with swimming pool. The fact is that this and infinitely more await us believers who we will take possession of one day. 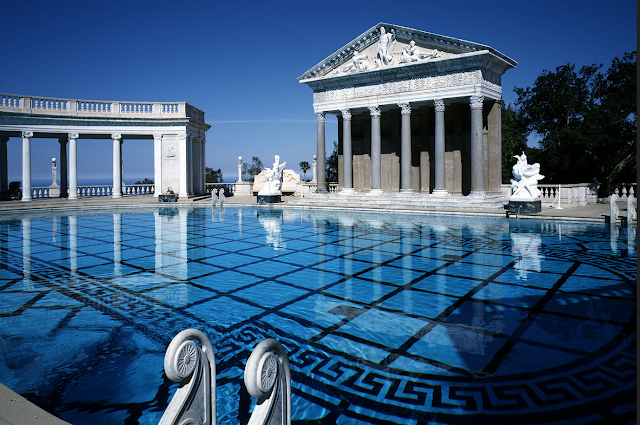 The illustrated science stated that the researchers had found that all people had lived according to the teachings of Jesus, the golden rule, the sacrament of worship, or the principle of reciprocity. Then we had managed to feed the earth's people 52 times. In other words, we are today 7 billion, but the Earth can actually feed at least 364 billion people.

The earth is not overcrowded - but rather underpopulated!

Genesis 1: 27 And God created man in his image; in the image of God he created it; to man and woman he created them. 28 And God blessed them, and said unto them, Be fruitful, and multiply, and fill the earth, and put it under you, and give counsel to the fish of the sea, and to the birds of the heavens, and to every beast that toucheth the earth. 29 And God said, Behold, I will give you every herb that soweth, and every one that is upon the earth, and every tree with fruit that soweth itself; they shall be food for you. 30 And every beast of the earth, and every fowl that is in the heavens, and every thing that moveeth upon the earth, which is the breath of life, I will eat of every herb of green. And so it was. 31 And God saw all that he had done, and behold, it was very good. And it was evening, and it was morning, sixth day.

We see God's thought for man - living in abundance - multiplying us.

At the same time, show managerial responsibility, something that we have failed to these degrees.
Not least because we do not have the ability and will feed all people in this world, it is tragic that we cannot do it!

In the United States and other Western countries, the senior executives often pay more than 1000 times the average wage as the average worker.

The top executives of the US's 350 largest companies earned 312 times more than the average salaries of corporate employees last year.

It shows a recent report by the Economy Policy Institute (Epi).

In 2017, senior executives increased their salaries by 17.6 per cent on average, and received compensation of USD 18.9 million, equivalent to nearly NOK 160 million.

For the company's employees, the average salary increase was 0.3 per cent.

The increase is, according to Epi, mainly driven by share-related compensation for top executives. So it is not the monthly salary that has increased the most.

However, the entire increase cannot be explained by rising stock markets. The S&P 500 spent 637 per cent between 1978 and 2017. During the same period, the compensation for top executives increased by 979 per cent.

In comparison, the companies' top managers received an increase of 11 per cent, ie over six times as much.

This means that "guys on the floor" have to work over 166 years before they have earned the same income as the director gets in one year.

This shows a survey done by the independent think tank High Pay Center, which has collected data on the FTSE 100 companies. There is a stock index for the 100 highest-priced companies listed on the London Stock Exchange.
(quote end).

Walmart bosses in the United States earn over a thousand times the average salary of their employees.

When some have such astronomical salaries, then we must understand that the world is "crazy." Anyone who thinks this is sustainable in the long run, it can be fooled enough. It is not, not least when we know it will be difficult times.

But when Jesus comes and establishes his kingdom of peace. His 1000-year-old kingdom where law and justice will go out from Jerusalem, we will see that what we humans did not achieve. He will get that + much more. We read, among other things. in Amos.

Amos 9. 13 Behold, days come, saith the LORD, that whosoever ploweth shall reach him that reapeth, and he that treadeth grapes shall reach it.

about throwing out the sperm, and the mountains shall drip from the must, and all the hills shall flow over. 14 And I will cut off the captivity of my people Israel, and will build up the waste cities, and dwell there, and plant vineyards, and drink their wine, and cultivate gardens, and eat their fruit.

Read here so wonderful, could it be better?

Firstly, "when the plowing man reaches the reader."
Then next: "Whoever treads grapes will reach the person who throws out the seed".
Thirdly, "the mountains shall drip with moth, and all the hills shall overflow".
Fourth, "I will put an end to the captivity of my people Israel, and they will build up the ruined cities and dwell there."
Fifth, "plant vineyards and drink their wine and cultivate gardens and eat their fruit."

Notice when the plowing and harvesting operates simultaneously. Then there will be opportunities to have autumn and spring all year round.

Then the same thing is repeated, as the blessing will be in all areas, not just an area.

When it stands for the mountains and the hills to move over, do I think it is aimed at the animals? Either way, the animals also live under God's blessing.

When God puts an end to Israel's captivity, all other people will also follow.

It will continue to be the last mentioned. The blessing is not something that comes only one year, but every year.

The fact is that God, if he had got his way and will with us humans, and we had lived only after a sentence of the teachings of Jesus, the golden rule that says: "All you want others to do to you, you too should do against them. For this is the law and the prophets in a sum. "Matt. 7. 12.

Today, it testifies to God's existence that there is so much abundance that we can saturate the earth's people many times. But why can't we do it? Humans' love and greed, which, unfortunately, is great, testifies to how big and deep the fall is. That fact is that approx. 1/3 of the Earth's people do not get fed up, witness how corrupt and corrupt we humans are in ourselves!

We as Christians know why it is as it is in this world, even though the people of the world could in fact easily be saturated, humans had lived according to the teachings of Jesus. Not least the golden rule that says: "All you want others to do to you, you too shall do to them. For this is the law and the prophets in a sum. "Matt. 7. 12.

Meanwhile, we are "waiting" for God's kingdom to come in with Jesus' creation of his 1000-year-old PEACE. So we as believers know that humans are becoming more and more corrupt and selfish. This is one of Jesus speaking through the Apostle Paul how people will be now in the end time - the time before Jess comes again.

2 Tim. 3. 1. But you must know that in the last days difficult times will come. 2 For mankind shall be self-loving, money-loving, magnanimous, overbearing, mocking, disobedient to parents, ungrateful, unholy, 3 unkind, unreliable, slanderous, immensely, unmoved, unloving, good-for-good, 4 deceitful, infertile, inflated, such as Love their lusts higher than God, 5 who has the glory of godliness, but denies its power - and these you shall turn away from.

Such is humanity in itself, deceitful!
But in Christ Jesus, we are men on the right path and in favor of God, everything is whether we are in Christ or not.
Lagt inn av Jan Kåre Christensen kl. 10:42