No. 1764: There are times when believers turn from the Lord, that one also gives enemy - Satan - space, to come into our lives!

No. 1764:
There are times when believers turn from the Lord, that one also gives enemy - Satan - space, to come into our lives!

The picture from the fire on Scandinavian Star, which unfortunately so many died. 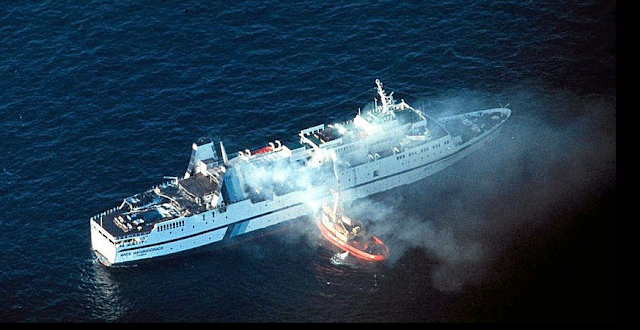 1 Cor. 5. All things are heard of adultery among you, and such adultery that is not even mentioned among the Gentiles: that one adheres to his father's wife. 2 And ye are puffed up, but ye shall rather mourn, that whosoever hath done this work may come out from among you. 3 For I, for my part, who is absent with the body, but present with the spirit, already have, as though I were present, made the judgment of the one who did this, 4 that he should enter into the name of our Lord Jesus, being and my spirit gathers in the power of our Lord Jesus, 5 given to Satan for the destruction of the flesh, that his spirit may be saved in the day of the Lord Jesus.

If we as believers do not turn to God but from God. Then we open up to Satan, sin, darkness and demons in our lives. Unfortunately, we all do this from time to time. But when it is about to become a position for us, it gets worse.

Here we read that there were saved people in Corinth who began to live in sin after they were saved. And in fact, they were living so obviously sins that it was not wrong to be wrong. They lived with their father's wife who was not their mother.
In other words, it seems that their fathers had not been saved, but those who saved new ones took part in the sins of the pagan. For our family members who are not saved are Gentiles even though they are close to us as our carnal relatives.
All the time it is a struggle for us believers not to be caught by the world, sinned, the flesh and all the unclean we have been saved and set free in!

2 Pet. 2. 20 For if they have fled from the uncleanness of the world by knowing our Lord and Savior Jesus Christ, and then being captured by it and lying under it, then the latter has become worse with them than the first. .

A brother with whom I attended Bible School later claimed that I was infiltrated by unclean spirit powers when I claimed, taught, and believed that the congregation was not going through the great tribulation.

For me, it is okay for people to think, believe and learn differently from me. I can handle that. But to assert that I was ruled and led by darkness when I argued and saw the congregation not going through the great tribulation. Then I think the person has left the right path, and has even come into the dark.

2. Pet. 2. 15 They have forsaken the way and gone astray, following the way of Balaam's son, who loved the wages of unrighteousness 16, and was reproved for his own righteousness; 17 These are waterless wells; The night of darkness is ready for them.

The person who claimed this was hit by a major tragedy for some time when his newly-married wife and the child she had in her stomach died during the tragic Scandinavian Star fire. Scripture says, "They have forsaken the path and gone astray, the night of darkness is ready for them."

The person himself survived in with his own son, while his wife died so tragically and she was pregnant, then two people died.
It has great consequences for us to leave the Lord after we have come to know Him. Here it became a deadly end, where they were obviously not under God's grace, protection and rule anymore with their lives.
But it was the darkness, Satan and the demons like the council. We know what Satan and the demons bring, the opposite of Jesus and God.

Joh. e. 10. 10 The thief comes only to steal and murder and destroy; I have come to have life and abundance.

What he did by trying to both grieve my Bible view that the congregation is not going through the great tribulation.

And to call it false doctrine and that it was from the dark. Then he went over a "spiritual" line that was bad. At the same time, he did some other things that I will not mention since the person a few years ago asked for forgiveness.
So that from my side it is out of the world. But there were big consequences for him, unfortunately. Something it does when we have learned the Lord first, and turn away from Him and walk on our own and the darkness.

Luke 11. 24 When the unclean spirit is gone out of a man, it goes through dry places and seeks rest, and when it does not find it, it says: I will return to my house from which I went. 25 And when it comes, it finds it swept and decorated. 26 Then it goes away and takes with it seven other spirits, worse than itself, and they go in and live there, and the latter is worse with that man than the first.

Notice that for more than that, Jesus' word of God and the Spirit of God have been working in their lives, and one goes away from it. Worse, if one does not take care of his spiritual life. The one Spirit that one has had before becoming a believer. It returns itself, and with seven worse spirits than itself, and what happens then?

Then one has opened up to the darkness and the forces of Satan again, as happened to my former Bible school friend.
He opposed the Lord, the word of God and all that has to do with God. And the consequences were fatal, all of which we must be aware of.
At the same time, the scripture is full of such examples that there are people who have served the Lord. Then they slip away from it, and the consequences are always negative.
Sometimes fatal, sometimes not quite that bad. But the fruit is always negative, not positive, good and heavenly.

Think Eg. on Samson, he served the Lord. But then he let go of sin and darkness. And it got to his path, and his eyes were stuck on him. When he died, he died tragically as a prisoner of the enemy. Although he killed many in his death, more than he did through his life. Then he died blindly and as a prisoner.

Think of King David, who opened up for sin. His son he got into adultery died, and in fact all the children turned against him more or less. As well as his son who followed him on the throne. Began in Spirit and also entered a life of sin. The list is long and we can continue in time both backwards and forwards in the Bible.

Having seen a long life with the Lord, living with God has major consequences. Therefore, Jesus gave us several examples that we must think of Christian life as more like a marathon race than a 100 meter race.

Luke 14. 28 For whoever of you, who will build a tower, will not sit down first, counting on what it will cost, if he has enough to finish it with; Able to complete it, all who see it will start to mock him and say: 30 This man began to build, and was not able to finish it? 31 Or what king that goeth out to meet another king in battle, first not sit down, and counsel whether he is able, with ten thousand, to meet him that cometh against him with twenty thousand? 32 But if he can not, then he will send messengers to him, while he is still far off, and ponder about peace.

Note that Jesus compared it to building a building.
Here's a tower. You have to count on how much the tower costs to build before you begin. So it is to live as a believer, one has to expect to live the Christian life not just one day, a few days. But a lifetime, and forever!

Furthermore, Jesus said it was like going out in war and being inferior to the enemy. What do you do? Either you go for victory, or you think about peace.

The person formerly my Bible school friend had not calculated well enough to serve the Lord. When one also opened up to the spiritual world, he trampled to the degrees of error in a crucial phase of his life.
If one then "changes" page as he did, the consequences are often very large. Here it ended in the most tragic way. I hope and believe that he has returned to the Lord, but the warnings are here for everyone to take care of their spiritual life rather than anything else.
To begin with is not complete, it is about standing out the distance!

1 Cor. 10. 11 This happened to them as role models, but it is written for admonition to us, to whom the last times have come. 12 Therefore, whoever seems to stand, he sees to it that he does not fall! 13 There is no temptation for you, which men cannot bear; and God is faithful, who will not let you be tempted over ability, but make both the temptation and its exit, that you may endure it.

I have written about this so that others have to think about the consequences of having once served the Lord. But turning away from it, so can and will have consequences.
Sometimes as here, they become extreme. Even then, one can come back to God and receive new grace, forgiveness, and restoration with God in Christ Jesus!

Joel 2. 25 And I will restore to you the years that the plunder hath eaten up all things, and the leper and the shearer and the rod, my great army, which I sent unto you. 26 And ye shall eat, and be satisfied, and praise the name of the LORD your God, which hath made you wonderful, and my people shall never be ashamed. 27 And ye shall know that I dwell in the midst of Israel, and that I am the LORD your God, and none else; and my people shall never be put to shame.

Yes, so is God, even the most tragic he can and he will turn to the best for us if we repent. Seek Him and ask God and people for forgiveness, restoration and healing!
Lagt inn av Jan Kåre Christensen kl. 05:43