No. 1758: It screams about killing the Norwegian wolf, but the real problem is that today's sheep are bred and suffering from it!

No. 1758:
It screams about killing the Norwegian wolf, but the real problem is that today's sheep are bred and suffering from it!

We have written some articles on other things a purely spiritual thing also on the heavenly blog. We take up the direct wolf resistance that is really human.
The climate crisis they are screaming for is not man-made, but it is this conflict.
This is not recorded.

Picture of Norwegian wildsau which unfortunately has erased here in Norway. Especially where the wolf is and is being accused of killing sheep galore.
The wolf kills offspring, not the sheep that is natural to him. 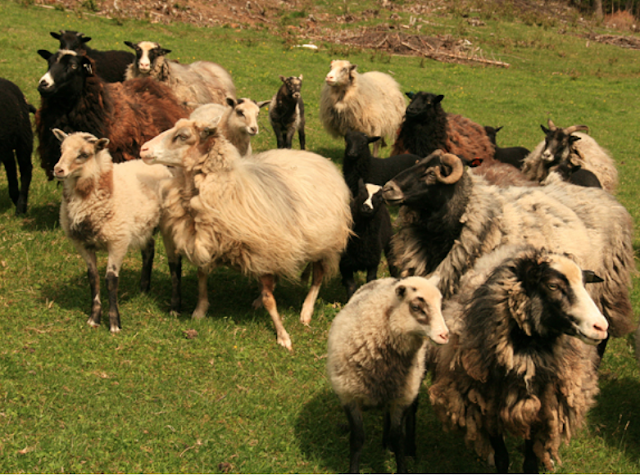 This again only shows that it is the sheep, not the wolf, which is the main problem when we in Norway have bred a sheep that does not naturally belong here.

Old-fashioned sheep, also called austevoldssau, utegangersau, steinaldersau, ursau and villsau, is a Norwegian sheep breed that has been rebuilt on the remains of the original landrace that existed in Norway and in parts of Europe in general. The breed belongs to the so-called shorthaires and is relatively small of growth.

Old-fashioned sheep is a primitive and very old sheep type. Aries weighs approx. 43 kg in average, while the lakes usually weigh about 32 kg. According to Breed and Livestock, sheep from the Bergen district have been estimated to be descendants of sheep that have existed here for more than 3,000 years.

Old-fashioned sheep are light-skinned and fast compared to other sheep. It can go out all year. Wool is fine and varies in color from almost white to gray and brown shades and patterns to near black. If ulla grows freely, it falls off in early July. It is not normally collected, and it is rarely anyone using it for knitting or weaving, since the yarn is often rough.

The lakes get one to two lambs, depending on the supply of nutrients in time before the cover and during the winter. In the event of poor access to food in the winter, there may be a big difference between the lambs if there are two, and in most cases the sea rejects the least. At birth, the lambs weigh approx. 3 kg. The lakes have good maternal instincts and are often left to rest for up to 3 days while getting acquainted with the lamb and getting stronger and steadier on the legs. Then she follows the herd, which helps protect her offspring as well.

Old-fashioned sheep have a unique flight behavior compared to other sheep. When it flees from predators it will spread out in fan shape. The strongest animals will dominate the flight and pull their predators so that the weakest can hide. Since this sheep is very fast, the loss of sheep as a result of predators is almost never recorded. The disadvantage is that this sheep is also not as easy to control with a shepherd dog, as it will use the same flight behavior to this one. The result is that the dogs will return with only a few animals. The sheep will also put on the swim to avoid being caught.

Villsau is a commonly used term for old Norwegian sheep of the colt type, actually a stupid tamsau. Villsauen survived on islands along the west coast and has since the 1950s spread along the entire Norwegian coast. The wilderness graze all year round, also in winter. Along the coast, and especially on some of the larger islands in Western Norway, the climate is so mild that the animals can survive throughout the year. In severe cold conditions and in case of major snowfalls, they are often given supplementary feed. Norsk Villsaulag was founded in 1995 and counts almost 400 villa farmers along the coast from Agder to Finnmark.

Not just all right with Norwegian sheep ...

It is heavier, slower and probably a lot dumber than before. The breeding has probably made the Norwegian sheep less suitable for meeting predators.

Today's sheep farming is at the expense of the sheep's natural instincts. This suggests research from Bioforsk Nord. Natural instincts such as herding, the lambs staying close to the mother, and the constant vigilance of predators are less prevalent among modern sheep breeds than Norwegian urea. Some of the reason is that we have had very few predators in Norway for a long time. Once these are on their way back, the conflict is further reinforced because the sheep have "forgotten" how to behave.

Today's agriculture is far from the old mode of operation, where there were a number of different sheep breeds that were adapted to the valleys, mountains, climate and dangers that characterized the area they lived in. Today, about 80 - 85 percent of all the sheep belong to the same breed , Norwegian white sheep. This is a mixed breed, a mix of the old Norwegian sheep breeds, including races from other places in the world.

Norwegian white sheep get many lambs, which in turn grows rapidly up to harvest weight. Also the quality of wool and meat is good. What you have not focused on is the ability to escape predators. All breeding has focused on fast growing lambs and the best possible meat filling. Avlskriterier NSG has therefore led to the sheep becoming larger. An adult sheep can now weigh up to 100 kg, which is as much as a small bear.

In many ways one can say that this is a man-made problem.
We have bred a sheep that does not naturally fit in, at the same time it goes on pasture without a shepherd.
In other countries, they manage to get the most out, also that wildlife, livestock and people live together.
One should get in Norway, too!
Lagt inn av Jan Kåre Christensen kl. 05:30