No. 1766: Again a new court round when the authority is engaged in abuse of authority again against me and my family! Pray for us to win in the end!

No. 1766:
Again a new court round when the authority is engaged in abuse of authority again against me and my family!
Pray for us to win in the end!

Picture of Judge Edvards Os who was a judge in the Oslo District Court where in our opinion he did not really judge us. But the lies from PBE here in Oslo, County Council and Civil Ombudsman passed on, poor craftsmanship by a judge.

It is strange, our family and I am probably Norway's nicest man and law-abiding, as the first Christians and Jesus were. But the opposition to our family from the authorities is great, as the scripture says we must count on.

Now I was allowed by the municipality to build masonry on top of an old wall that was in there from before. On at least two occasions. They dictate this and lie now both internally in the Oslo municipality by PBE agency.
This has now been appended to both the County Assembly and the Civil Ombudsman, where there has been a trial of it. Even the judge there, Edvards Os continues the same lie.
Then it is not easy to win out when one lies and speaks false from beginning to end in this case.

We have appealed this case to Borgarting Lagmannsrett. We don't know if the appeal goes through, but ask that it make dear friends.
There is no point in that we should demolish the wall, staircase and storage room that Oslo municipality wants and has imposed on us.
This is government abuse again against me and my family!

This email here will not PBE put into its pages because it reveals them.
Here about our issues:
https://innsyn.pbe.oslo.kommune.no/saksinnsyn/main.asp?text=krokstien+2+c

Here is the mail, and they have done so that no one can read it, talk about miserable democracy.

Ask for further postponement when the case is appealed to Borgarting Lagmannsrett!

It is a rigid and erroneous judgment against us, including here:

1.) The City of Oslo writes this in its decision.

The plaintiff claims to have received oral approval to erect the support wall from the municipality several times. The state refers to the Planning and Building Administration's letter of 30 January 2017 to the City Department for Urban Development, where it is stated that the case officer referred to has not stated that a wall of this size placed in a regulated road surface is exempt from the obligation to apply. However, it may have been said that repairs / reversals of the original wall along the road would not be subject to application. The existing wall referred to was a low brick wall and cannot be compared to the listed wall.
The administration's duty to supervise must be seen in light of the fact that supervision is mainly conducted orally over the telephone, and that information is given on a general basis on the basis of the information provided by the promoter. Oral counseling by telephone does not have a binding effect on the municipality, and the owner of the initiative must bear the risk of having entered into measures subject to compulsory registration without permission.
(quote end).

Note that this process of the supervisory duty that the City of Oslo believes has been done correctly is confirmed by the County Governor and the Civilian Ombudsman.

A.) "The plaintiff claims to have received oral approval to erect the support wall from the municipality several times."

Yes, I have received guidance several times, here is what actually happened.

We moved in here in 2012. In 2013 we called down to our then case officer Kaja Lange Aubert. It was called down 2-3 times, to make sure we did the right thing.
It is not easy to reproduce this five years later, and when there were several phone calls it feels like one when it is five years later.
And, that the city of Oslo has not been interested in hearing our version at all, they had decided 3 - 4 years ago that we should get everything down.

What happened to the phone calls we had with our then supervisor Kaja Lange Aubert?

Do you remember remembering that we called down mid-May and August 2013? It is five years back in time, it is a long time ago and difficult to remember in detail every word as it was said, but in my memory she replied like this.
Then I asked about the following, we set up stairs and wanted to set up walls. Trapp I think we set up 2013, when before this we had had a rope that we threw ourselves down on in the Stormyrveien, and believe it or not, it is to this level the Oslo municipality has given us the order to return to that we should use a rope to throw us down on the road with. You do not believe it, but we had it before we built a staircase that the city of Oslo has ordered us to demolish, to grasp the one who can.

I asked what was needed to build a wall, to which I got the answer that if a wall was built there before, it was not mandatory to build one on top of it. This replied Kaja Lange Aubert.
I said yes, and then Kaja Lange answered Aubert that then it was NOT APPLICABLE WHEN IT WAS BUILT A WALL FROM BEFORE!
THIS GOES GOOD GOOD!

I further said that we foresee a wall of 1.5 meters and 1 meter fence.
This was no problem she said, as others from before have higher walls than you.

In 2013, I even called an extra time, for the sake of safety and asked the same, and the same answers were given.
BUILDING UP OLD WALL WAS NOT APPLICABLE.
As long as there was a wall there before, we didn't have to search even though the wall was different. In other words, we got permission in advance of our construction of masonry, the Oslo municipality breaks Norwegian law by contesting this.

However, PBE says something else now, namely:
b.) "However, it may have been said that repair / return of the original wall along the road would not be subject to application. The existing wall to which was shown was a low brick wall and cannot be compared to the listed wall. "

The Oslo municipality has not missed this conversation.
Only I and Kaja Lange have Aubert, no one else.

When the City of Oslo sets out to explain what has been said in a telephone conversation that they have not overheard. Then they make two big mistakes here.
First, they lie, and afterwards they fantasize about something they think has been said. This in itself means that neither the City of Oslo, the County Governor nor the Civil Ombudsman have any credibility when they can allow themselves to commit such roars. This is also against Norwegian law and regular decency to make things into a document.

Had the fictitious and lying presentation that PBE gives here been true, then of course we had never set up wall.
Of course, it is a question of lies that PBE is doing.
Unfortunately, both the County Governor and the Civil Ombudsman have let this pass, it just says that their credibility in this case is equal to zero.

What has really been done here by the City of Oslo, the County Governor and the Civil Ombudsman? When it can be determined with certainty that all government agencies do not speak true and are not willing to accept that we have received oral approval, it means that their overall credibility is absolutely decisive!
Yes, they do not respond to our inquiries regarding this, and when they do, they have either fabricated either a "truth" or speak false and dictate what could and may have been said in several phone calls they have never missed or referred back. to Kaja Lange Aubert who gave us oral permission to build.

With imprisonment or imprisonment for up to 2 years, anyone exercising or assisting in the exercise of public authority is punished and grossly violates their duty of service.

c.) "The administration's duty to provide guidance must be seen in light of the fact that supervision is mainly conducted orally over the telephone, and that information is provided on a general basis on the basis of the information provided by the promoter."

This also becomes false and wrong to write. We have not received general guidance, but specific guidance on several occasions. Therefore, to write such, then they neglect their duty of service again. The lies will if no end take for various bodies we have been in contact with. They lack impulse control completely. One day this is law, the next day it is illegal.

The answer from PBE here in Oslo where they want us to demolish everything before the trial is over. 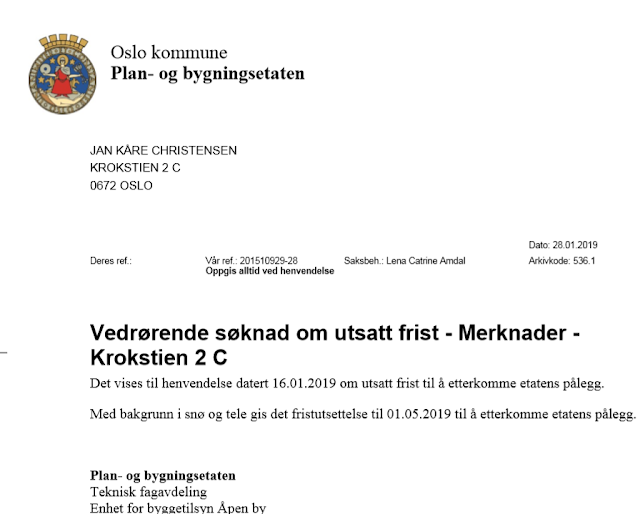 What we are exposed to is, according to all solar marks, nothing but wrong case processing and unjustified differential treatment compared to our case, and here there is abuse of authority.

Therefore, ask that the appeal be passed on to Borgarting Lagmannsrett and we win there, anything but this is unreasonable, ugly and there is obviously abuse of authority against us, again!

Who is behind all these attacks against me and my family? The script here is very clear:

Yes, it is clear what the evil and the work of the Evil One is:
"The thief just comes to steal and murder and destroy!"

Here it is obvious what is what, no doubt that it is the forces of darkness that are out on the voyage that they have been before.
Again, this has ended up in a really pointless trial.
Just because we are again exposed to wrong case processing and unjustified differential treatment compared to others in a similar situation.

Here there is government abuse again against me and my family!
Lagt inn av Jan Kåre Christensen kl. 08:38